Sex is a Witch 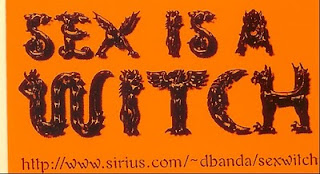 This band was formed in a flash and went up in smoke, the whole thing lasting about eight months, from late 1996 until July of 1997.
Sex is a Witch started at Lennon Studios in S.F., where singer/guitarist Meri St. Mary was working the front desk. Meri had fronted a very popular band called Housecoat Project, and after several years off to raise her son and deal with some personal issues, was looking to start a new band.
Guitarist Mia D'Bruzzi had played in Frightwig and Mudwimmin, two amazing examples of S.F. Punk. Mia, an awesome guitar player (Strat w/ a Twin!) was looking for a new project.
Rachel Thoele, on bass, had also played in Mudwimmin. She had just left a popular band called Van Gogh's Daughter, and was looking for a new band as well.
As for me, despite being very sad about the recent death of Justin Martin and the ultimate end of Lithium Milkshake, I wanted to hit the ground running and get out playing as quickly as possible. 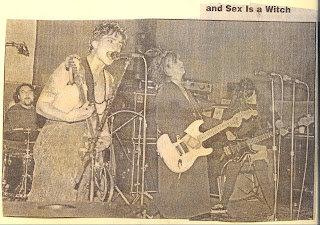 Our first gig was New Year's Eve, 1996, at Lennon Studios Sound Stage, Dore alley in SOMA. This gig was a real victory for the band, and for me personally. For Meri, it was a kind of re-introduction to many of her friends and fans. I was satisfied to be playing a good gig, within a tight band, inside of the same building in which my pal Justin had passed away.
Several fun shows followed, notably at Kommotion, Stinky's Peep Show at the CW Saloon, and on Market St. for the (then) annual Summer Solstice "Making Waves" Fest. I also put together a show that featured my other band, Ahab, along with Sex is a Witch, at New College of California. This show was a benefit/fund raiser for Altaneze Taylor's Bright Moments Jazz Lover's Club. Ms. Taylor was at that time allowing me to try and start a program to teach kids in the Bay View/Hunter's Point area of S.F. the fundamentals of trap kit drumming. The objective was to raise enough cash to buy a small drum kit for the class. 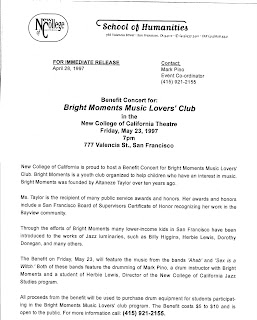 Above: press release for benefit show at New College. I'm not sure that anyone who received one of these bothered to show up, least of all the staff at said college. 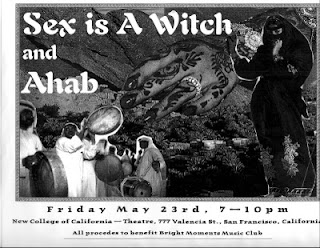 Above: flyer for benefit show at New College. Collage and lettering by me. 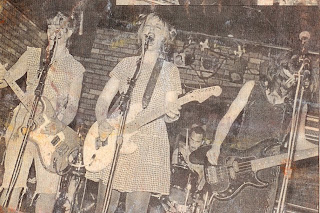