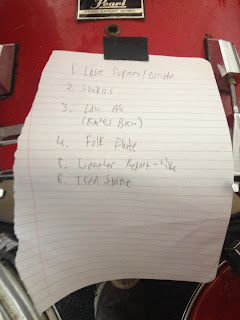 A day after wrapping up another one of Mika Pontecorvo's three day events, and I'm most definitely stoked. Just as with the past few of these happenings, I got to play a lot of music, hear a lot of music, and to try to be as helpful as possible to a community of musicians that I respect and admire. Really great times.

6/3-After a pretty stressful work week, I was feeling tired and drained, but managed to gather the energy to cram my car full of drums for the back line and schlep it on over to Berkeley Arts Festival space. I only played with one group, Cartoon Justice. For this gig, we were joined by author Meg Pontecorvo. Meg is a Science Fiction writer, and brought that aspect of her creativity to our sound. I set up my drums in the worst possible spot in which to hear the vocals, and duly paid the price. I couldn't hear Meg at all, really. Total bummer on that side. On the positive, it seemed like there was some good interaction between the Kersti's sax and my drums, and Eli's bass playing always inspires. Mika utilized his "Slicer Dicer" programming to seemingly good effect, as well. A somewhat subdued set, all in all, but, fun none the less. Berkeley Arts Festival could use a monitor or two, though. 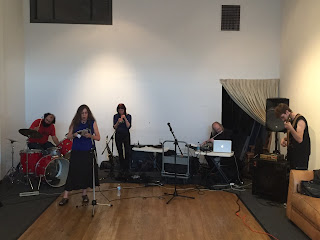 6/4-Saturday was definitely a busy day for me. After watching a great set from Reconnaissance Fly, I joined in with Terra Incognita, a Miles Davis-inspired big band featuring many of this region's improvising musicians. The grooves felt good-to-great, and my listening seemed to be honed in. A total blast to pair up with drummer Aaron Levin! The ensemble had loud, swirly interaction and was sweetly energetic and possibly psychedelic as well. What a joy!
An hour or so later, and I hooked up with CDP, a trio set up by Amanda Chaudhary. Rent Romus joined us on alto sax. This music was, for the most part, charted, with two written pieces by Amanda and one of my graphic scores. I made a few clams on the written pieces. Still, I'm grateful for any opportunity to read charts. It's a "work in progress" for me, for sure. Amanda suggested a bit straighter, 8th note-based playing, with a Funk feel, and I stuck to that vibe. At one point, during a very consciously decided upon "Disco Part", some audience members started doing the classic Saturday Night Fever Travolta arm point. Ha! Rent seriously wailed, though. He's just unstoppable in any setting.
Next up was v'Maa, a drone band based upon Sami shamanism and spider mythology. We were joined by Finnish singer Lau Nau. This set was chill and seemed to unfold nicely. I'm not sure how much Lau Nau sang, but she gave me a nice compliment at the end of the set. Nicely spiritual and float-ey playing from Mika, Kersti, and Eli.
Finally, Ear Spray set up our video bombardment unit as the penultimate act of the day. Basically a reprise of our recent Stork Club gig, with many of the same samples and sounds, from both drums and Carlos's synths. Still, I felt very connected to the sounds. Ann's video work just keeps improving. She puts a ton of work into it.

Above: Lingua Incognita (photo courtesy of Aaron Levin, thanks Aaron!) 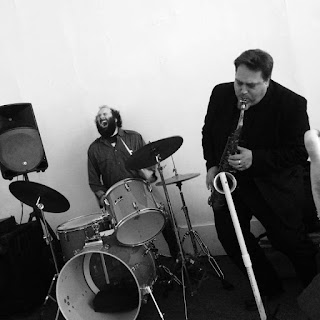 Above: close up of me and Rent Romus playing in Lingua Incognita (photo by Moe Staiano, thanks, Moe!) 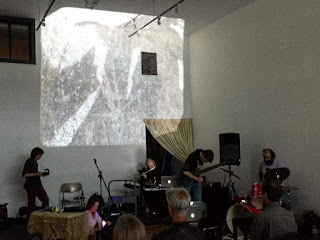 Above: v'Maa with Lau Nau (photo courtesy of Amanda Chaudhary, www.catsynth.com, thanks Amanda!) 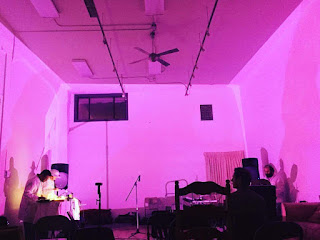 Needless to say, I slept like a rock on Saturday night after arriving home.

6/5-All Tomorrow's After Parties 2016 winded down somewhat quietly on Sunday. Between other events, the Warriors game, and whatever else was going on. Still, some really good music was presented at Berkeley Arts Festival! David Leikam's z_Bug comes immediately to mind here. Wow: HEAVY. My band Cosmists played, and were lucky to be joined by Sheila Bosco. I saw Sheila's gear when I arrived, and hurried to call her and ask if she'd like to sit in. Thankfully, she agreed to do so. Her percussion and synth sounds added nicely to the trio of Collette McCaslin, Andrew Joron, and myself. We did a piece in tribute to Captain Beefheart, which included a poem that I wrote about Mr. Van Vliet. This may have been the smoothest set I did all weekend in terms of execution. Although the other Cosmists were appraised of the form on the day of, they all played together quite well. I'm really happy with the recording, and hope to have it up on-line in some form eventually.
Finally, ebolabuddha closed out the weekend's event. By that time, pretty everyone had split, and Steve could not even make the gig, so it seemed like a certain kind of "what the fuck?" looseness came over us. With guests Tom Weeks on alto sax, Lorenzo Arreguin on guitar, and Mika Pontecorvo on guitar, ebolabuddha spat out one long thirty minute Apocalypto Jam, full of raucous energy and glandy power. Texts that I read from were by Ovid and Dante. Ovid is seriously Metal. Despite the lack of audience, we had a great time. 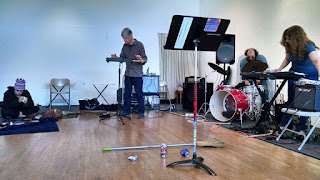 Above: Cosmists (photo courtesy of Polly Moller, thanks Polly!)

At the end of the evening, as we packed up gear and cleaned up the Berkeley Arts Festival space, I felt effusive in my joy at having participated in another great Next Now. Hopefully we can use the space again, come January 2017, for the next Hardly Strictly Personal event. I guess that Cal project management only knows for sure...... 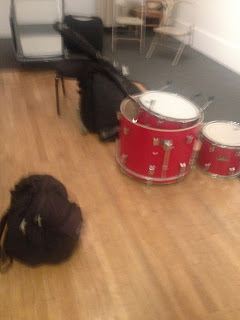 Above: may that hardwood flooring remain in place!