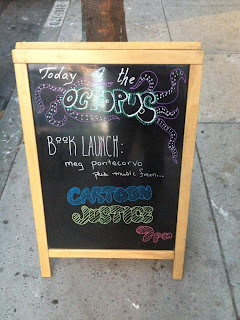 After a busy of day of work and then a quick recording session at Skyline Studio in Temescal (hopefully more on that at some point in the future), I blazed over to Octopus Literary Salon in downtown Oakland for a night of literary/musical fusion with Cartoon Justice and ebolabuddha. The event was organized around Sci Fi novelist Meg Pontecorvo's release of her newest work, Murder In the Generative Kitchen. Cartoon Justice was to play in accompaniment to her reading selected portions of the book, and ebolabuddha, being a kind of book oriented concept, was asked by Mika Pontecorvo to play as well.
The evening started with Andrew Joron playing theremin. I had forgotten that that I'd been asked to join in at some point during his set. This did in fact happen, but my playing felt a bit out of phase. Theremin, at least the way that Andrew plays it, requires a gentle touch and good listening. You really do have to practice with it. It's been a while since we've gotten together to do so, and I felt like it showed in my playing. Disappointing. Sigh.

Below: Andrew slips by the camera eye at Octopus Literary Salon! 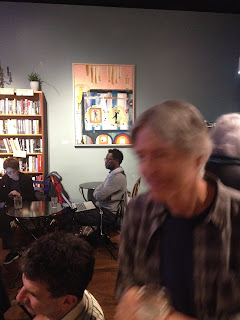 After a solo reading from Meg, Cartoon Justice began our set. We started with some quiet "primordial" feels, during which I enjoyed playing big, low, block chord clusters on the house piano, along with some waterphone. The group played quietly while Meg read a few more passages. We got a bit louder, more rhythmic, and more intense when she dropped off. This set felt better to me, as Cartoon Justice has put in a fair amount of practice over the past several months. It's always fun to play along with Mika's Free Blues guitar.

Below: Cartoon Justice set up for writer accompaniment 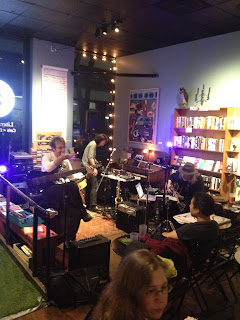 Last up, ebolabuddha played a frantic, manic 35 minute set. We did my written score, Saturations With Jumps again, and I have to say that this time it felt much more together and melded. I used some shouted conducting, and, while not exactly graceful, seemed to work as far as guiding Tom, Lorenzo, Jason, Steve, and Eli, along with myself, through the piece. Success!!!!
The people that stuck around were also great: they all read from books as we played; this is an essential dynamic of an ebolabuddha set, and we were very grateful for their participation. Much fun seemed to have been had by all. Group glossalalia!

Below: small drum kit for a small space, and a graphic score 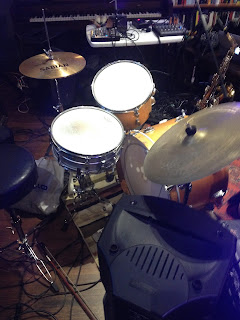 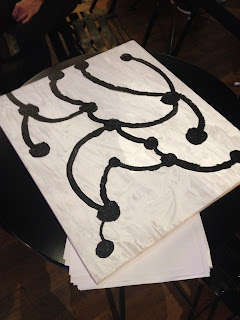 As usual, it was great fun to make music with the Pontecorvo family.
Looking forward to more ebolabuddha tonight in San Jose!

Below: bonus shot: Infinite Plastic Internal recording sesh; we'll see if anything worth releasing came of it (photo by Bill Wolter, thanks Bill!) 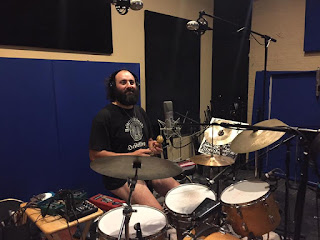