Out with the old, in with the new (I hope)

Musically, 2010 was pretty fucked up for me.
My involvement in two long-term bands ended. In late July, I quit Ovipositor, due to personality conflicts. It was a tough decision to follow through on, seeing as that I'd spent a full seven years involved in creating Ovipositor music. In October, Barney Cauldron fell apart. I had spent three years attempting to lead that band, but I feel that my efforts were very flawed, and the resultant implosion was probably justified.
All that said, 2011 looks to be a bit brighter. I hope to be announcing gigs by a few new projects, both of which have arisen from the ashes of my last two bands, along with another project that is shaping up from simply asking around, "do you know anyone who is looking for a drummer?"
Happy New Year! 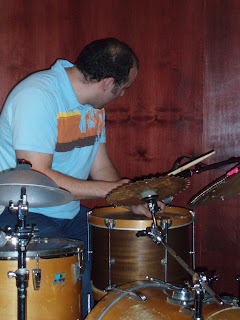 This footage was filmed to someone's phone, I think. Thanks to whomever it was that posted it. 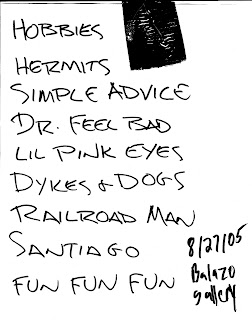 This is a recording from August of 2005, from a show at the great Balazo Gallery on Mission St. in San Francisco. It was a fun, weird spot. The bands played in what had been a kitchen, down in the basement of the building. Punk Rock Perfect!
Biscuit Turner, singer of the Big Boys, had died a few days before the show. Everyone in this iteration of Ovipositor was a fan of the Big Boys, so we figured we'd try out their anthem "Fun Fun Fun" as a way of memorializing Biscuit. Colin graciously let me "handle" the vocals on this one.

http://soundcloud.com/mark-pino-on-drums/ovipositor-fun-fun-fun-live-at-balazo-gallery-san-francisco-8-27-05
Posted by Mark Pino On Drums at 3:00 PM No comments:

Located at the west end of Haight St. in San Francisco from 1991 to 1998, Boomerang was a bar that would book any band. It did not have the air of exclusivity so vital for musicians' egos and their prospective fans' tastes. The stage was at least 9 feet off of the ground, so bands found themselves playing literally over the heads of any who might have been in attendance at a show.
The end of the longer clip features Lithium Milkshakes "end of set noise jam", something that I always enjoyed partaking in. I can recall one show at Gilman St. where we had a huge truck wheel well, made of steel. It sounded great, but damn it was heavy to schlep.

Posted by Mark Pino On Drums at 7:52 AM No comments:

As I've written a lot about Lithium Milkshake, I'll just let the videos do the talking. The last one cuts off, which is sad, because the song is a Rocker. Oh, well.
Enjoy.