Many thanks to Marjorie Sturm for recording and posting this!

Posted by Mark Pino On Drums at 6:03 PM No comments: 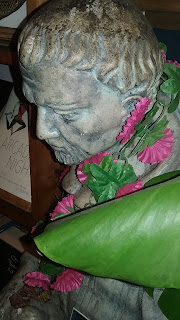 Some gigs seem to last for a long time, and others seem to zip by in a flash. Last night's Crow Crash Radio show at Adobe Books was of the latter category. It seemed as though time moved really quickly to me.
After really nice sets from Ernesto Diaz-Infante and Angel Archer, we stared up and proceeded to play what struck me as a pretty frantic, 40 or so minute set. Actually, I have no idea how long we played; it could have been 15 minutes for all I know. The feel of the evening ensured that perception in me. We had sketched out a set that was to be well-paced and on the slower side, but some strange energy came over me and I probably moved things a bit too fast. All of our set had this quality, really. I felt kind of disappointed in myself, but, thankfully, Brian and Andrew seemed to be OK with it when I apologized profusely for changing things up. Brian had some fine riffing on Tarifa, that's for sure. Additionally, it was funny that one person yelled out that we sounded like Classic Rock. Oh dear.
A very energetic, weirdly moving gig, at least in my perception. It was fun, but........fast.
Crow Crash Radio will play in Alameda in February.

Below: my only other photo from Adobe Books, as there just wasn't any time 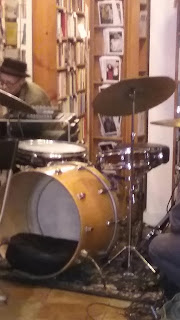 Posted by Mark Pino On Drums at 6:17 PM No comments: 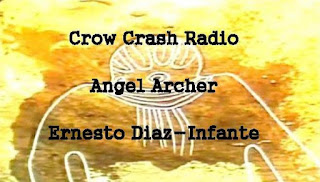 Posted by Mark Pino On Drums at 5:56 AM No comments: 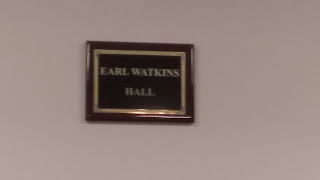 It hadn't been too long since Cartoon Justice had played at the Union Hall for SIMM series, but, man what a difference, at least as far as set up and other logistics went. All members, including our guest bassist Shawn Miller, were able to rendezvous with real ease, affording ample time to set up and even do a sound check. This ease seemed to be reflected in our set: a relaxed, albeit focused foray into two pieces, totaling a cool forty five minutes' time.
We started off with a shorter, all improvised piece. Things felt flowing and groovy right from the start. I was able to get into the vibe with everyone, interacting with Mika, Eli, Kersti and Shawn in what felt like equal measure. For the second piece, we debuted an evolving piece that has been written about the Amazon rain forest, and its perilous state as corporations plunder the resources therein. We drew musical inspiration from Hermeto Pascoal and Airto Moriera, loosely moving through three distinct parts. Mika's directions were sent out and noted by all. Having some notation helped a lot; I felt that everyone was able to sync up and agree as to which parts were to start. Really smooth transitions, and, again, I felt very much inside the music as it was happening. Such a great feeling, as always. It was a real pleasure to play the house kit of Earl Watkins  Hall, along with letting my old Box of Rocks reappear after many years on mothballs. Good percussive stuff!
A really nice night for Cartoon Justice in SF. We'll begin rehearsing for a very busy period this March, details soon.

Below: Shawn Miller's notes; Cartoon Justice run the changes down 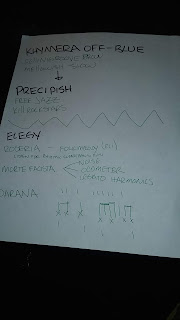 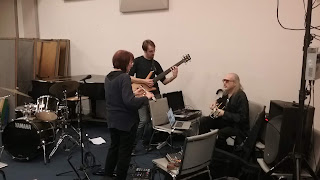 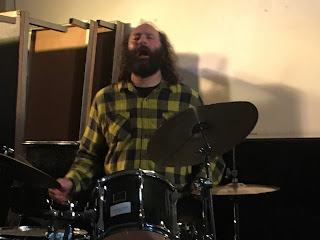 Above: Hopefully the music felt as ecstatic to the audience as it did to me (photo by and courtesy of Andrew Joron, thanks, Andrew!)

Below: a live clip

Posted by Mark Pino On Drums at 5:10 PM No comments:

Cartoon Justice this weekend is SF! 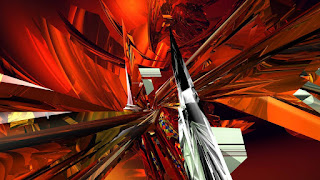 Cartoon Justice will be debuting a new piece.

Posted by Mark Pino On Drums at 5:06 PM No comments: 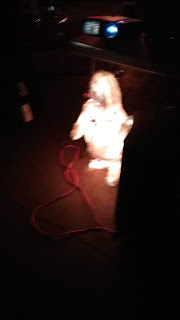 Dunno if it was the incessant rain or what, but this year's Noisehaus show was kind of sparsely attended. Too bad, because the lineup was the most diverse that I can recall. Harsh Noise, Garage Rock soloing, strange desert Psych, loner synth music: all these approaches were represented.
I guess that ebolabuddha filled the "band" slot for the evening. Also strange, as I seem to recall a lot more bands, particularly Grind-style, at previous Noisehaus events. Our set was very fun, a bit more cohesive seeming to me than the last few. At least, that's my perspective. It helped that I had my own drums with me; in the past, I'd relied on back line kits that felt uncomfortable and rickety. This time I brought my own tried and true gear, and was that much more relaxed for it. Not that ebolabuddha's music is relaxing. We were joined by Miles A. Murphy on electronics, who added some great madness with his rig. Tom Weeks blasted on alto sax, Steve Kiyota-Jong brought his tech guitar aesthetic, Eli lead the charge as usual. I tried as much as I could to interact with all of them, while keep up the energy. As mentioned, we stuck to a cohesive plan: a bit more Free playing within the instrumental passage, leading out of a reading passage and into a quick thrasher to end. It felt tight and right to me, the most fun I've had with ebolabuddha for a bit.
Such a fine feeling.
Stay tuned for the immanent announcement of ebolabuddha's first physical release!

Below: tiny little pretty kit; ebola dudes setting up, underneath a car 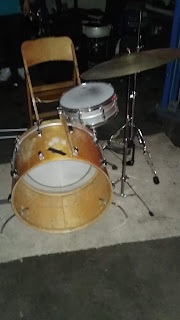 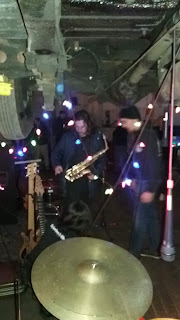 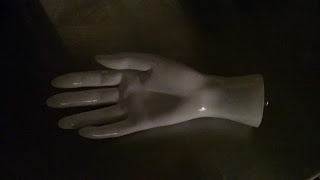 It seems as though things are changing around 6th St. and Market in SF. A walk around the neighborhood before the Reed/McCaslin/Pino Trio gig there last night showed me new restaurants opening up, along with the ubiquitous construction cranes and demolished buildings. I guess that the frantic development of SOMA and Downtown is finally reaching this area. Hopefully, the Luggage Store Gallery will maintain its foothold.
As for the music, we were treated to a really fine set from solo drummer Omzfield to start the evening. What a great, cohesive sound he got. Highly impressive. Amy, Collette, and I had a tough act to follow.
We got into some pretty whirling, shamanic feeling spaces right quick, with Amy singing into a contact mic, CJ blowing some fierce soprano sax, and me joining in. I felt like the interactions were good and intense. After a bit, Amy did some sweet prepared guitar stuff; I was happy to play along, trying to be subtle and supportive with brushes and mallets. Eventually, things got wild again, of course. Despite our initial plan to do three ten minute pieces, we ended up playing one 25 minute piece that roughly divided into three segments.
Despite the paucity of audience, I had a great time, and was very inspired by our sounds. A fun night, witnessed by few. The music remains the reason.

Below: my rig for the night; happy trio! 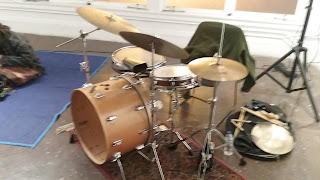 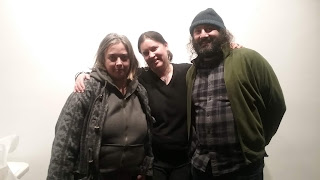