Brian Lucas and I are pleased as punch that We Have No Zen have placed our Mt. Tabor Suite up on their page, alongside so much other great music!

These pieces were improvised in Portland, OR, Hawthorne District, in late April of 2012.

Posted by Mark Pino On Drums at 1:22 PM No comments:

Front angle view.
Many thanks to the amazing Grux for booking us, and filming us!
Posted by Mark Pino On Drums at 8:39 PM No comments:

https://archive.org/details/UbradioSalon287
Posted by Mark Pino On Drums at 7:16 AM No comments:

Posted by Mark Pino On Drums at 1:58 PM No comments: 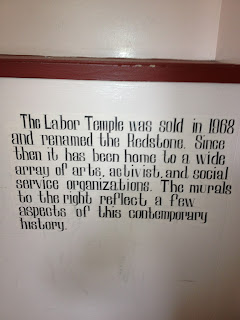 It was a busy day for Old Million Eye and Infinite Plastic Internal, as we played twice in one day.
First off, at the Lab in SF, we played one short piece, lasting about fifteen minutes or so. The show, one in Godwaffle Noise Pancakes Series, featured five bands, and for some reason the sets are always ten to fifteen minutes long, so we fit right in. Brian and I sketched out a brief guideline, and I felt like we stuck with it. I utilized a paired-down Cloud Kit, featuring mostly metals and few drums.  The sound built up to a nice, intense buzz, and I vocalized some half-remembered William Carlos Williams. 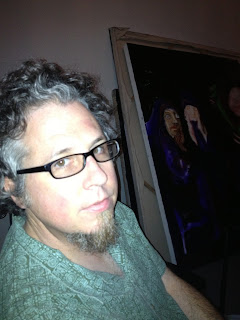 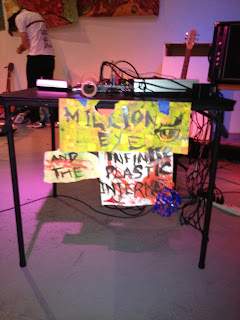 Grux did a really great job of curating this one, and we had a great time. Made enough money to buy tacos! 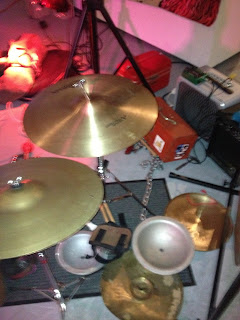 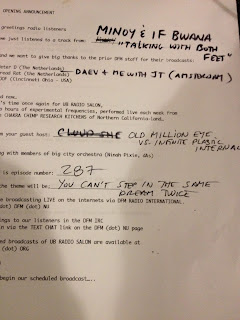 Later in the day, OME and IPI headed over to Alameda to play our second UB Radio Salon. Ninah and Das are great hosts, and we had a ton of fun trippin' out, live on internet radio. Ninah joined us on piano and flute. We played two hour long sets, trying to conjure up a dreamy feel. I improvised some poetry and read a snippet from Diane Wakoski. At times I felt a bit shaky, unsure of my rhythms, but we made it through. At the  end, both Old Million Eye and Infinite Plastic Internal were drained. 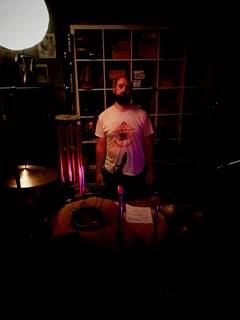 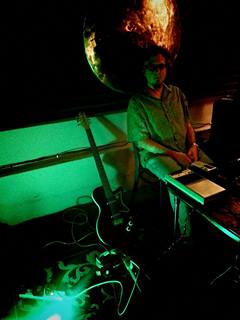 Below: Das, Brian, and Mark 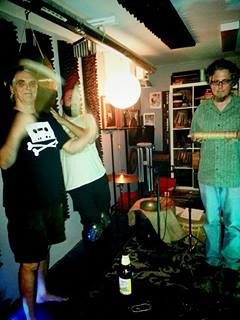 Below: sculpture outside of UB Radio Salon 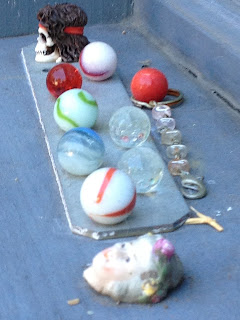 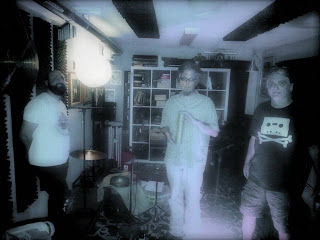 Posted by Mark Pino On Drums at 9:09 PM No comments: 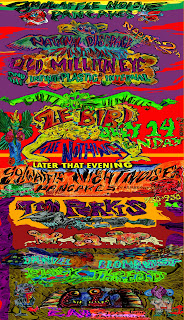 It's been some time since Old Million Eye (Brian Lucas) and I (Infinite Plastic Internal) played together in public, but this Sunday we'll have two chances to do so.
First up, we'll be playing Godwaffle Noise Pancakes at the Lab in SF. The Lab is located at 2948 16th St., near Mission. We will play first, at noon.
Next, we'll return to UB Radio Salon, broadcasting worldwide, here:
http://dfm.nu/
This show will go from 5-7PDT.
Come on out, or tune on in this Sunday!

Posted by Mark Pino On Drums at 7:30 PM No comments: 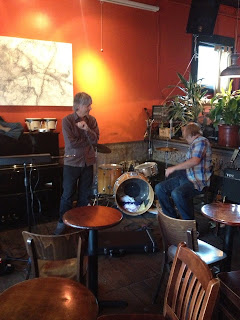 I guess that Independence Day is not the most optimal day to book a show, but, Revolution Cafe in SF had a cancellation, and Crow Crash Radio got the call.
It was actually a pretty fun show. We used the relative lack of interest from Revolution's customers to stretch out. Three sets of pretty loose, almost Velvets sounding tunes ensued. The barrista told us that we should change our name to "Free Drugs". I only stick to coffee, but, I considered that to be a compliment! 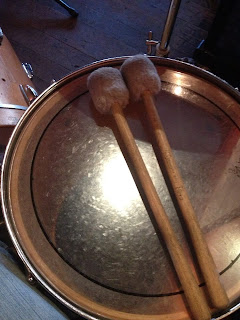 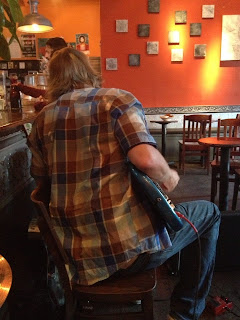 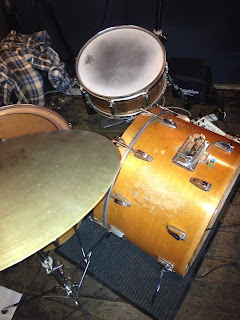 Posted by Mark Pino On Drums at 7:13 AM No comments: