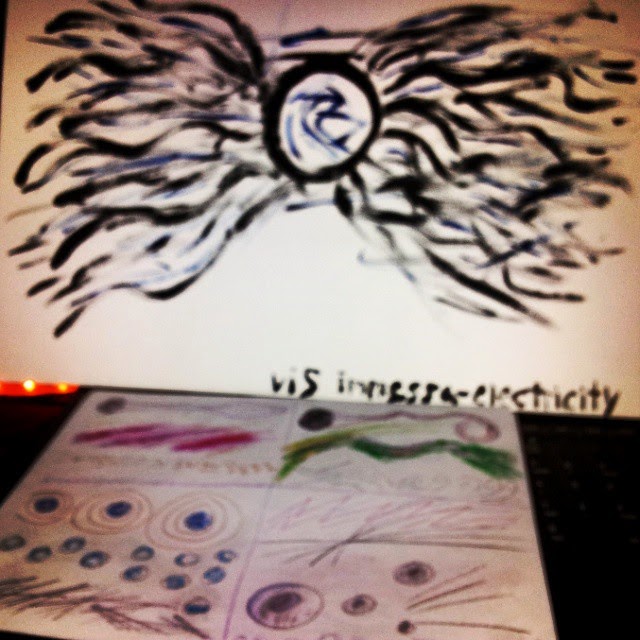 Although I've been to a fair amount of shows at Earl Watkins Hall over the past few years, it's been about three years since I've had an opportunity to play there myself.
Thankfully, Rent Romus had a cancellation for this evening, and asked me to play with himself, Tim Orr, and John Vaughn as the Hadron Quartet.
One concept that Rent wanted to explore was that of visual scores, something that I've been keen to utilize as well. My contribution was the piece Vis Impressa-Electricity, which was inspired by reading an analysis of Isaac Newton's work. Upon reading that description, I made the painting pictured above. Rent's contribution, Multi-Sonic Traveler, is pictured below it.
Upon thinking of the instrumentation, I decided to play Cloud Kit; it just didn't make sense to play formal drum kit, as I realized that Tim would have that covered.  This seemed like a good choice to me as we played: I think that I was able to accent and contrast with his drum sounds.
We played four pieces, the above compositions paired with two pure improvisations. It all felt good to me, as though we were listening and interacting accordingly. I was particularly pleased with my playing on the scored pieces. I'm definitely enjoying making music based within those sources.
I felt as though we kept things tight at endings, and made some pretty solid transitions, too.
I guess you could say that the Hadron Quartet played a somewhat dark,  introspective set, but where else can you go after Dialectical Imagination? Those guys' sounds are intense and beautiful.
Many thanks to Rent, Tim, and John for playing! 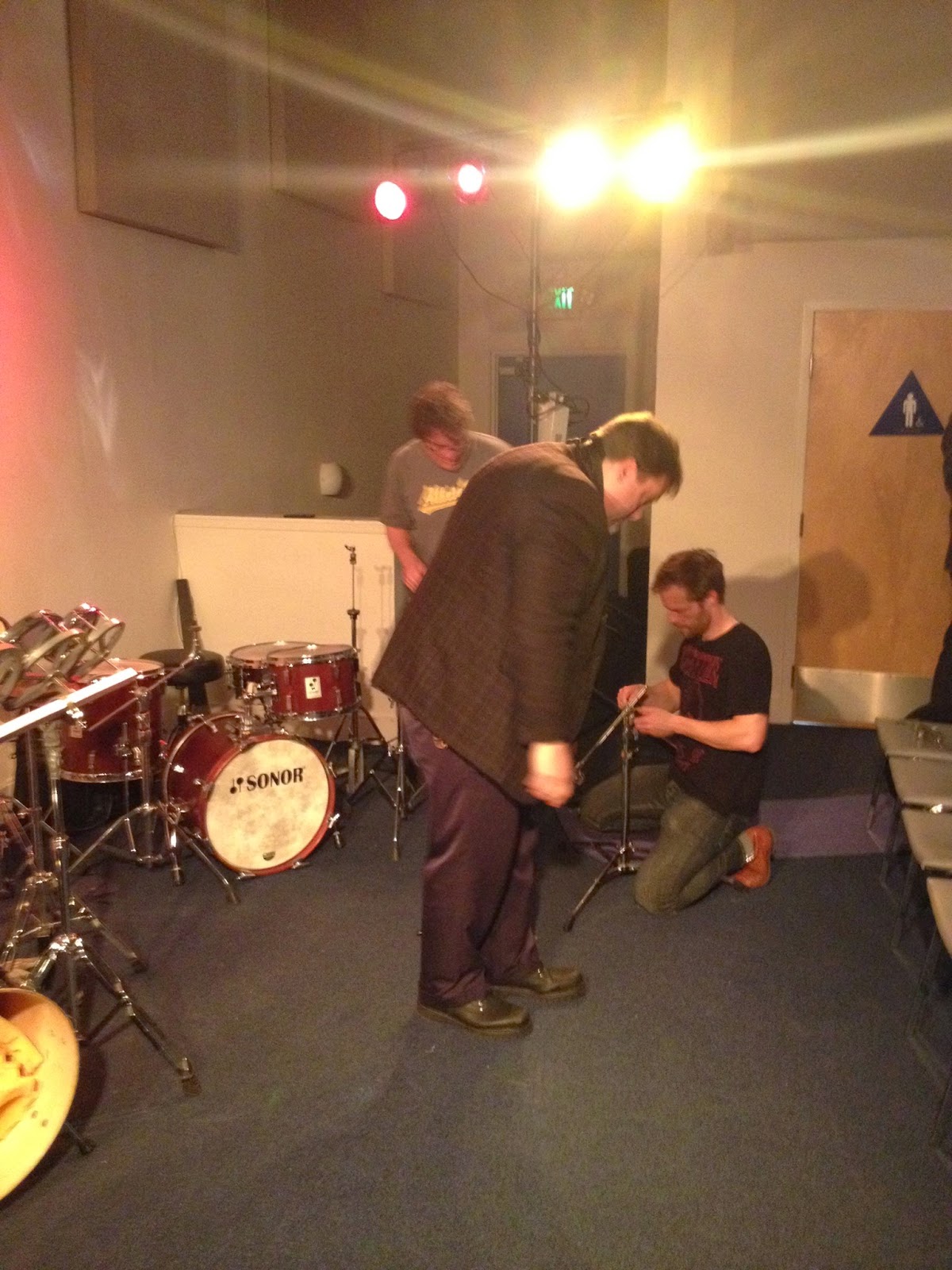 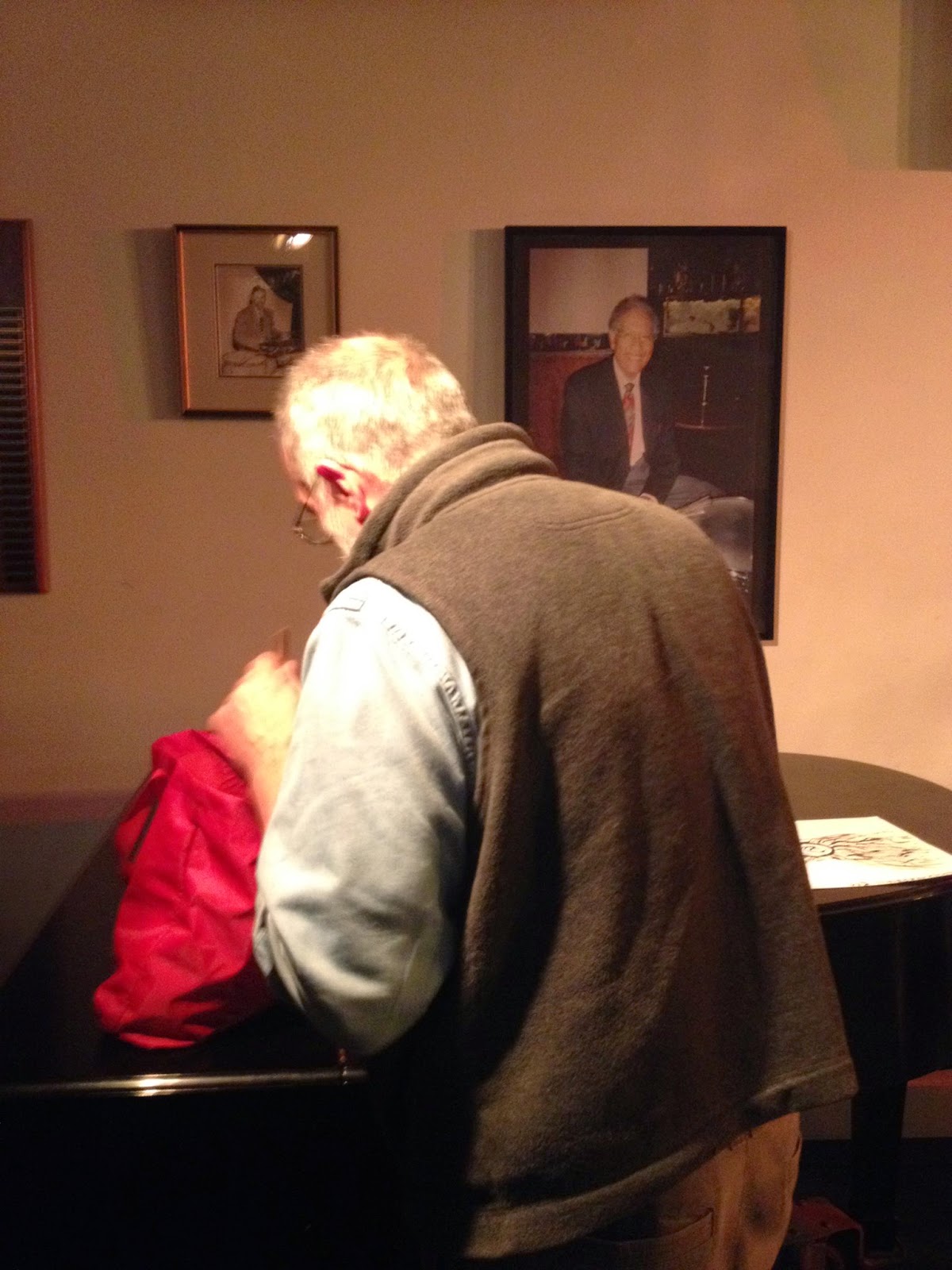 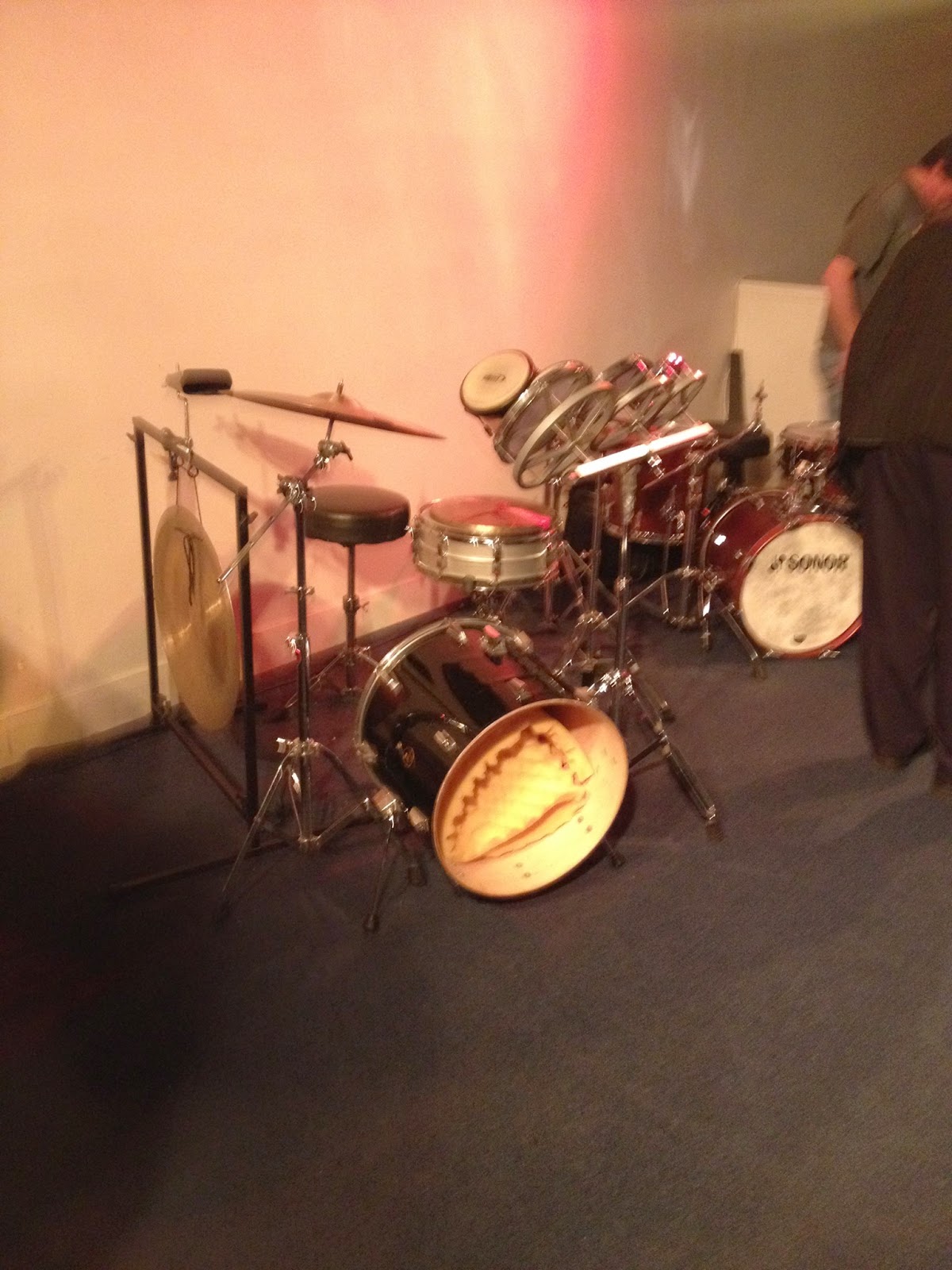 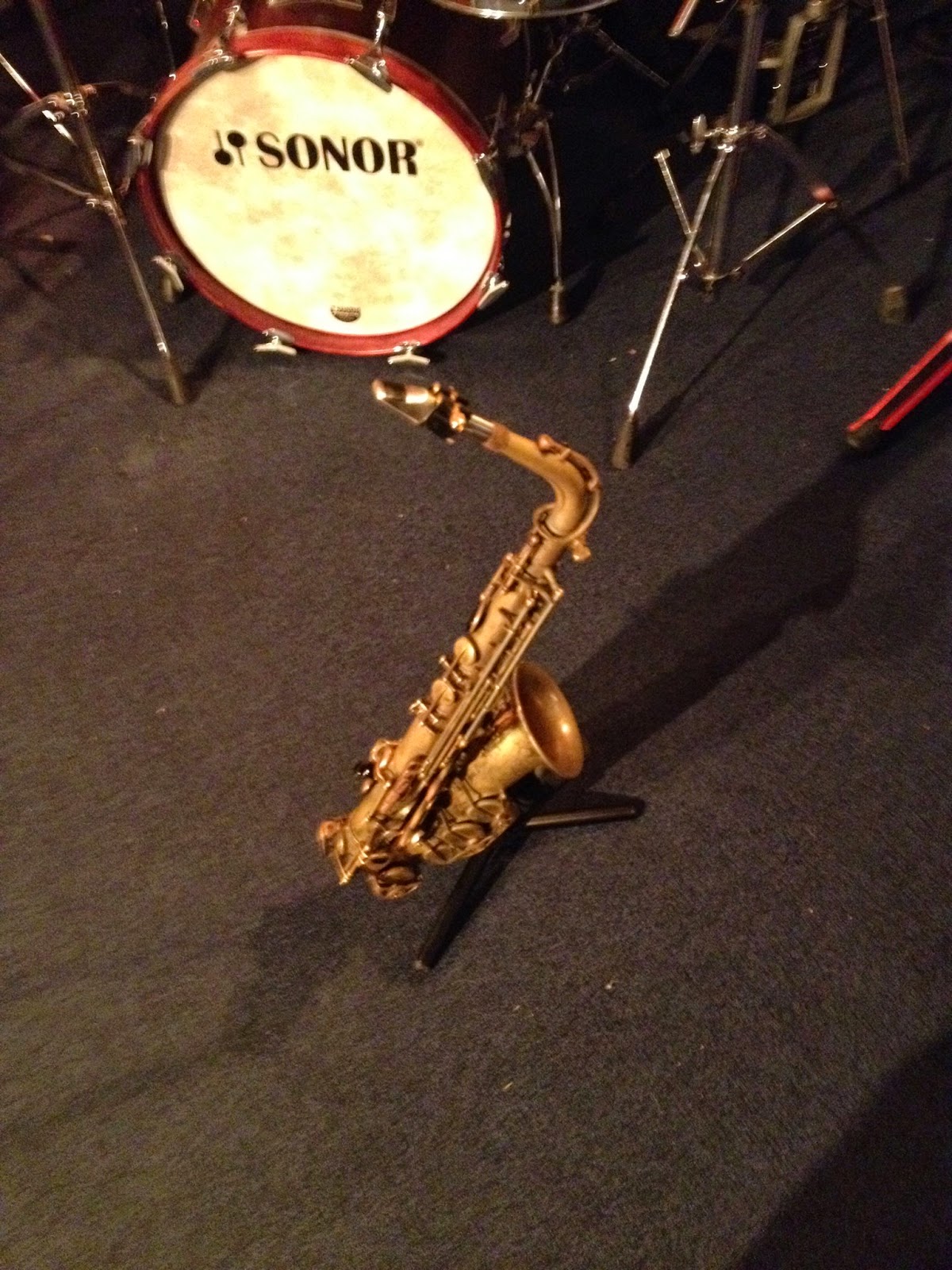 Above: Cloud Kit and the Alto of Romus

I will play with Hadron Quartet this Sunday! 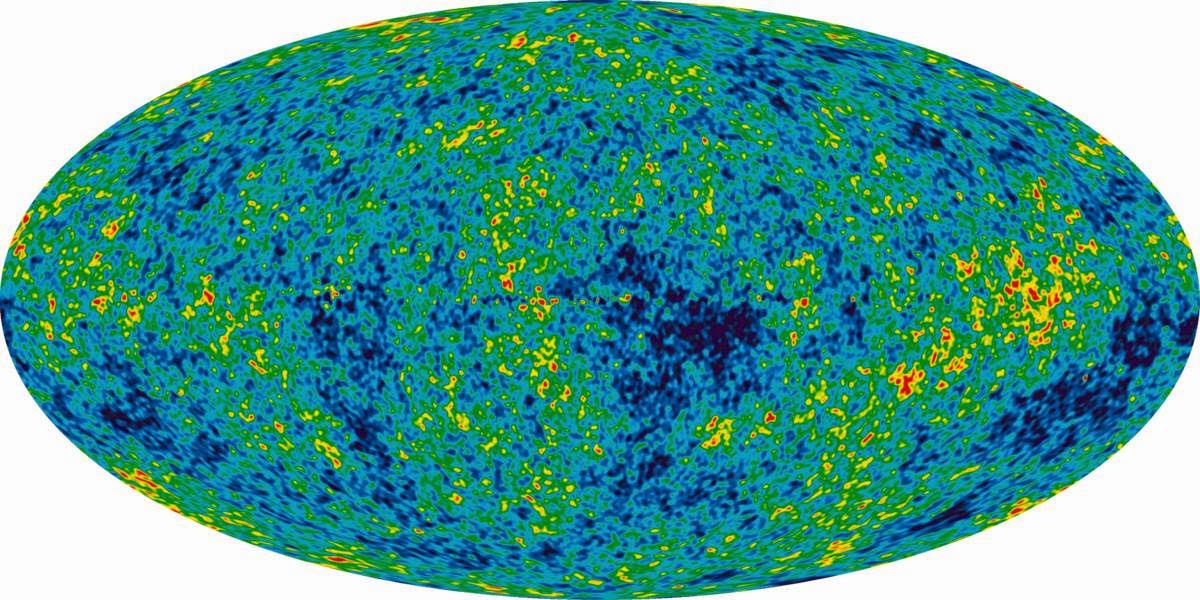 I'm really excited to announce my debut with Hadron Quartet! This group features fellow drummer Timothy Orr, Rent Romus on woodwinds, and Johan Vaughn, also on woodwinds!
We will be working from graphic scores, along with improvisational moments.
Powerhouse piano/drums duo Dialectical Imagination will also play!

This show will happen as part of the Outsound SIMM Series, taking place at the Musicians Union Hall Local 6, San Francisco.

Looking forward to it!

Posted by Mark Pino On Drums at 4:54 PM No comments: 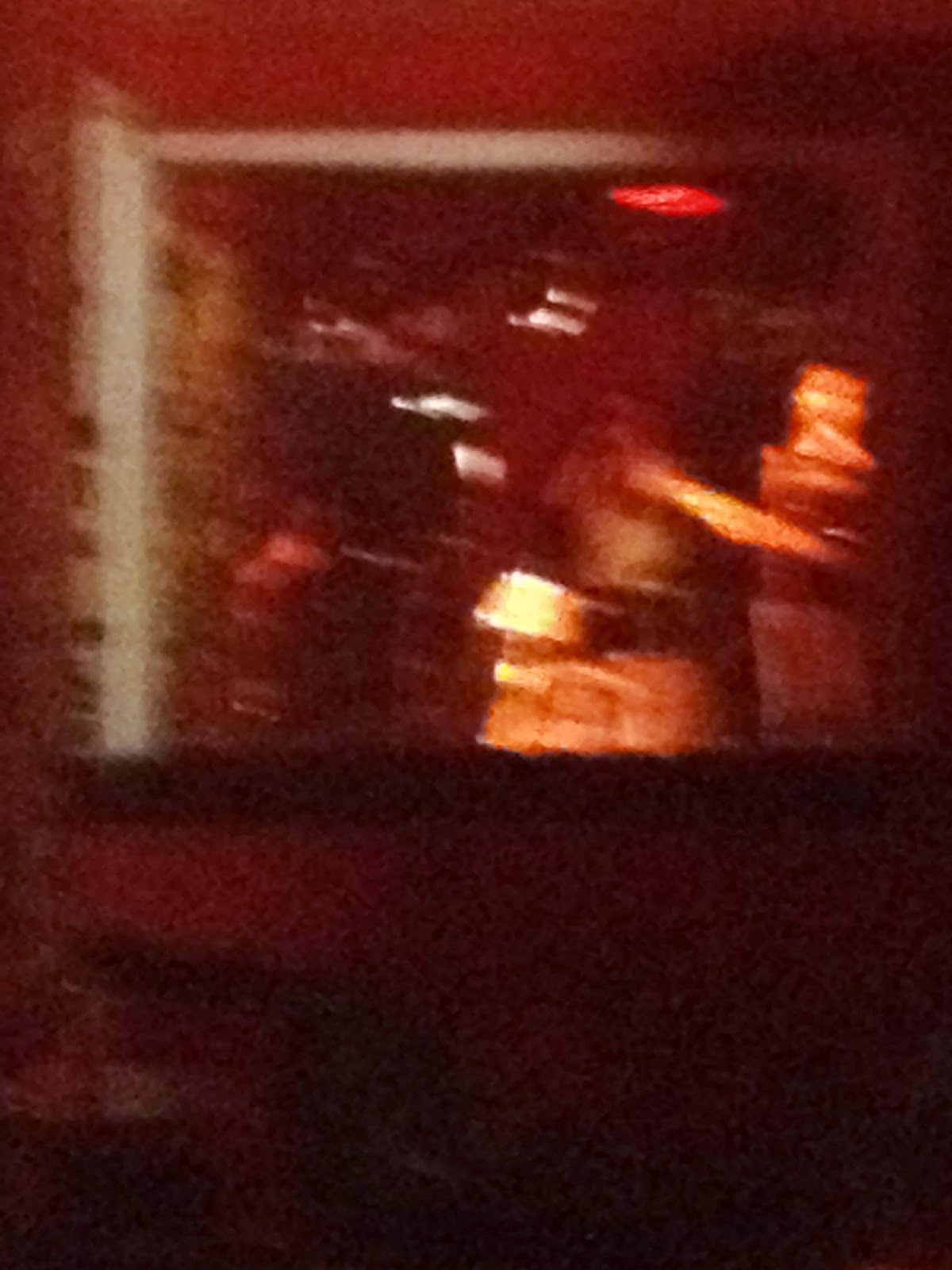 So I got home from work this afternoon and discovered an email from my pal Eli Pontecorvo: "sorry for the short notice, but could you play with me in an improvised Metal group tonight?"
Well, YES of course! Five or so hours later, I found myself at the Stork Club, standing on the stage with a guitar player I've never played with before, Steve, and Eli.
We made what I consider to be a fine, messy racket, as Eli invited friends and strangers up to sing, scream,  and read from a stack of books that he'd brought.
I decided that to go for shows of technical prowess would be dorky at best. I decided instead to go for an essential element, an essence of Metal. As such, I played loud and heavy, sort of a mixture of Philthy Animal Taylor, Steve DePace, and Fenriz. Now, I'm not saying that I played as well as any of them, but their sounds were the mental template for me.
Needless to say, I had a blast. I did the math on the drive to Oakland, and realized that it's been about two and one half years since Silencer Assembly ended. That was the last time that I really blasted on the kit.
It was also great, and humbling, to see and hear some really cool underground Technical Thrash and Death Metal bands, local and touring. FUUUUUUN.
Thanks to Eli, Steve, Mark from Anisoptera, and Eric from Megaton.

Below: scenes from the Stork Club! 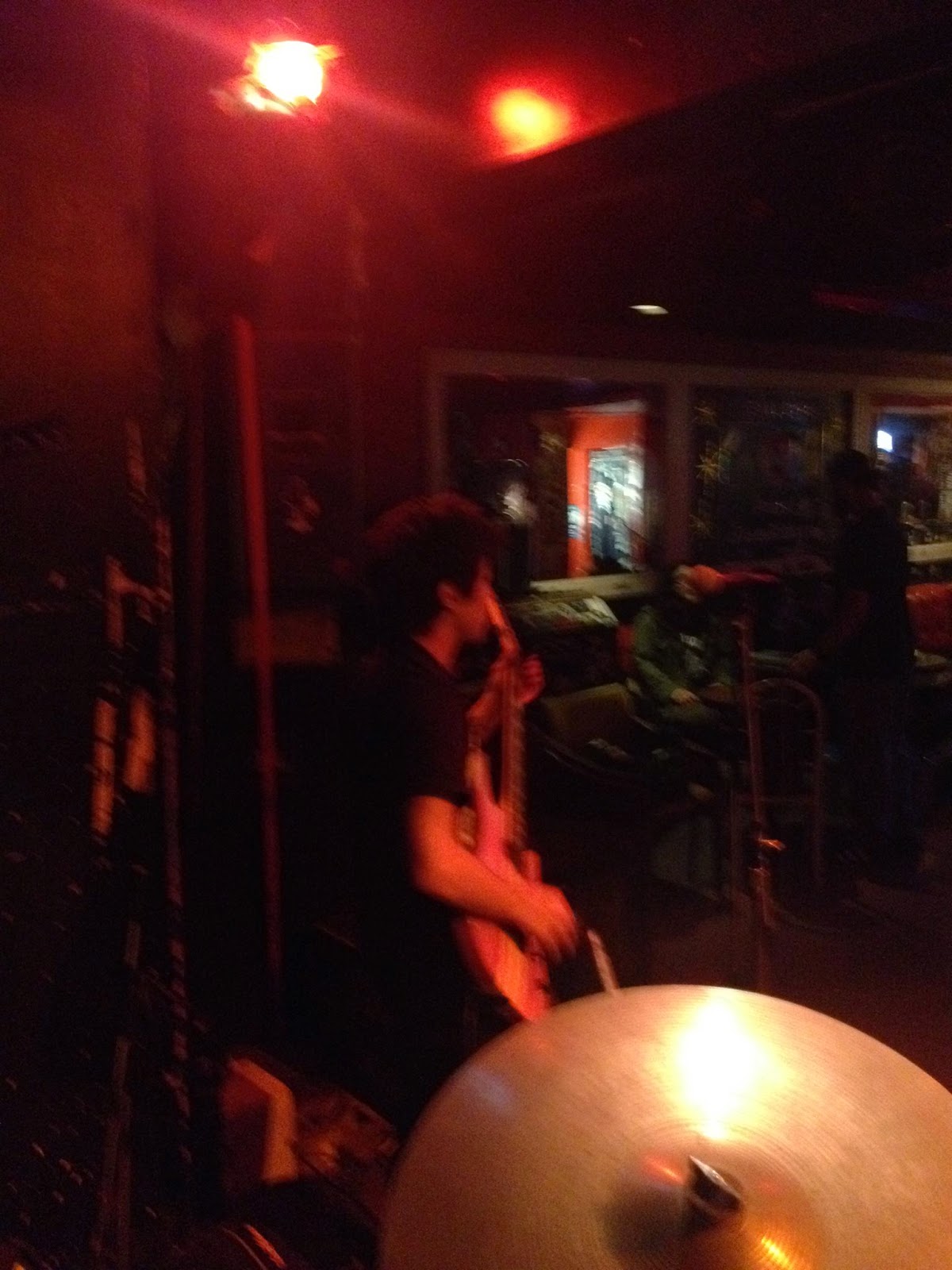 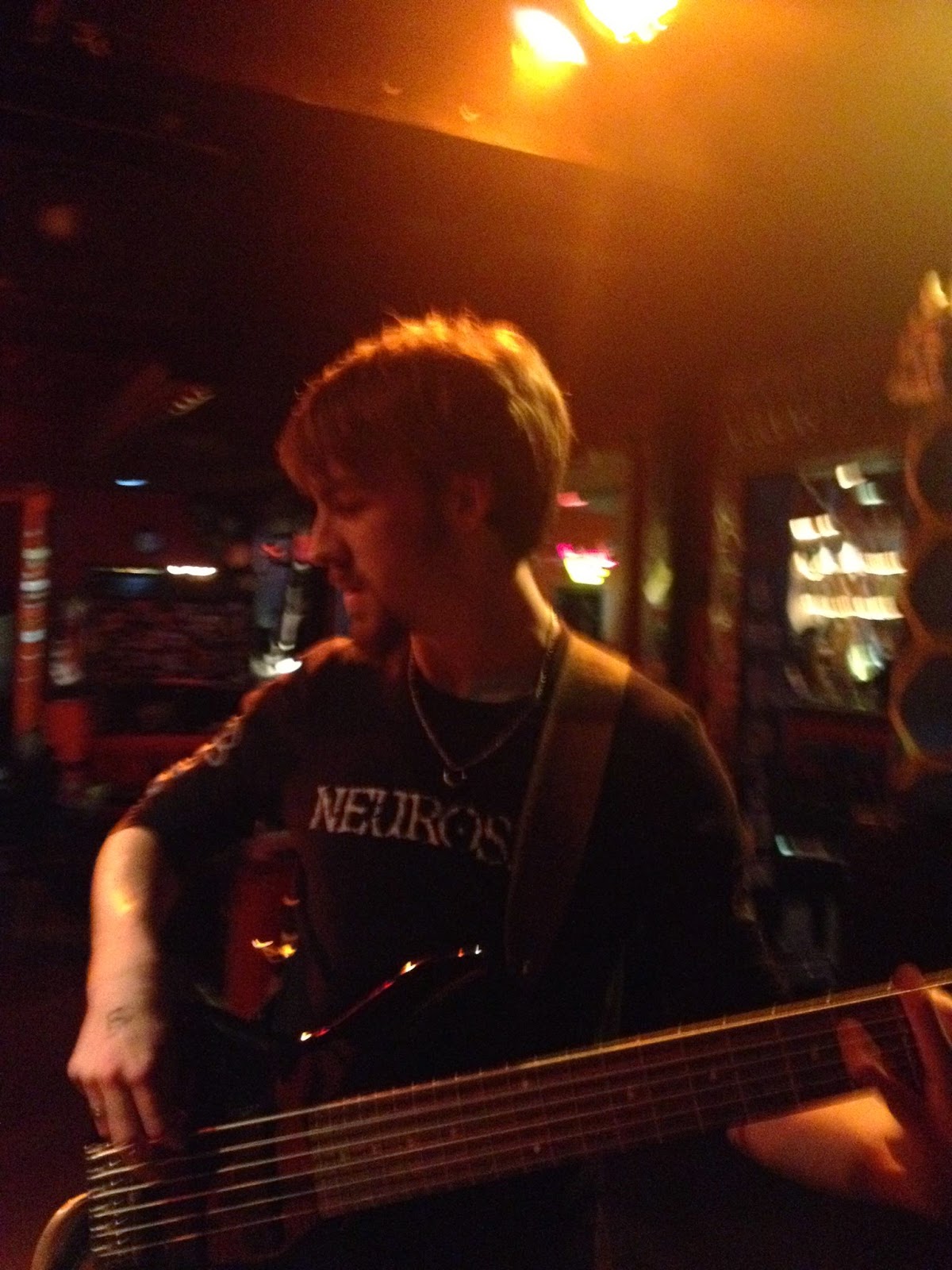 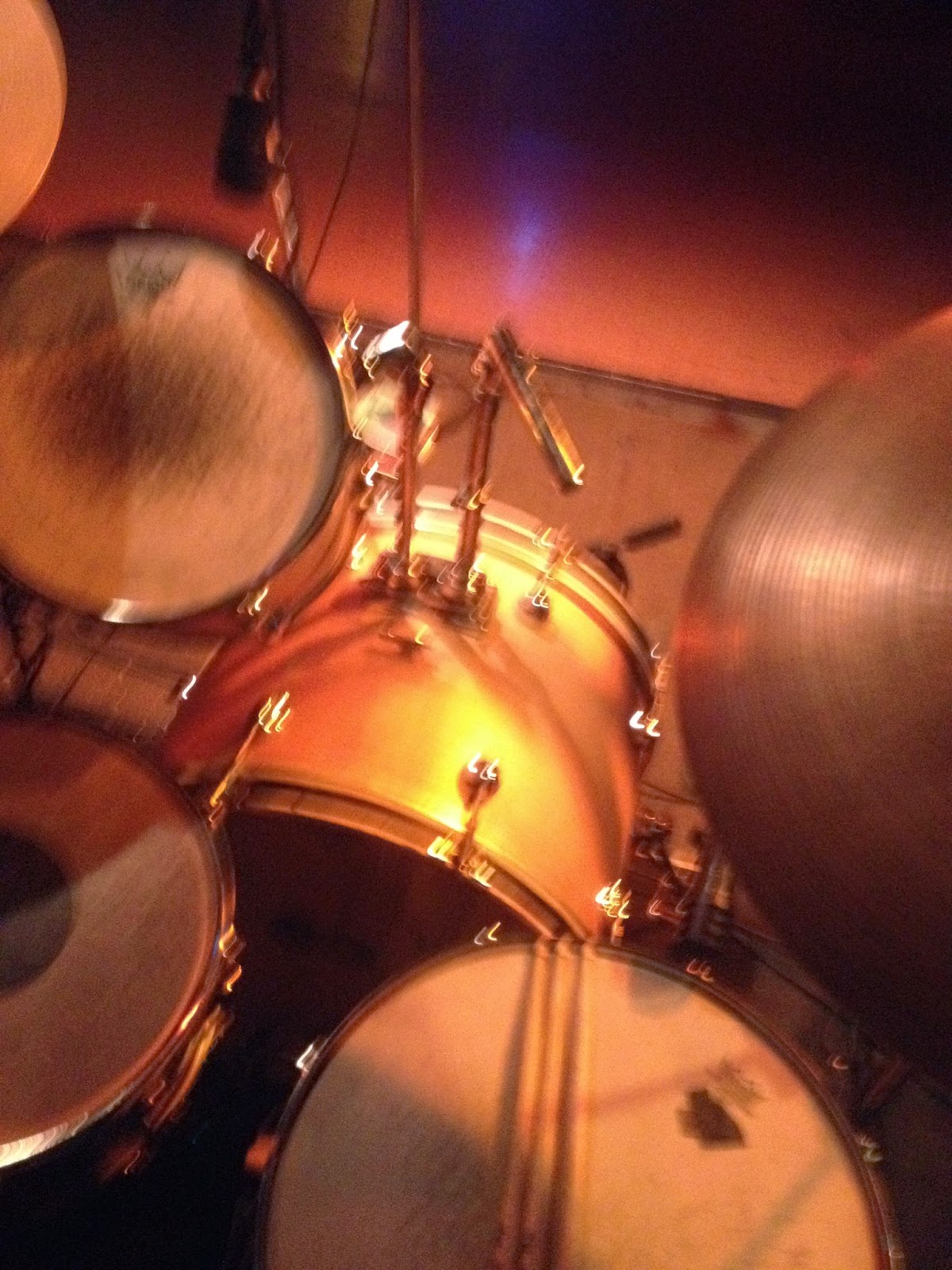 Above: great, funky old kit, thanks Mark from Anisoptera for let me pound on its toms. 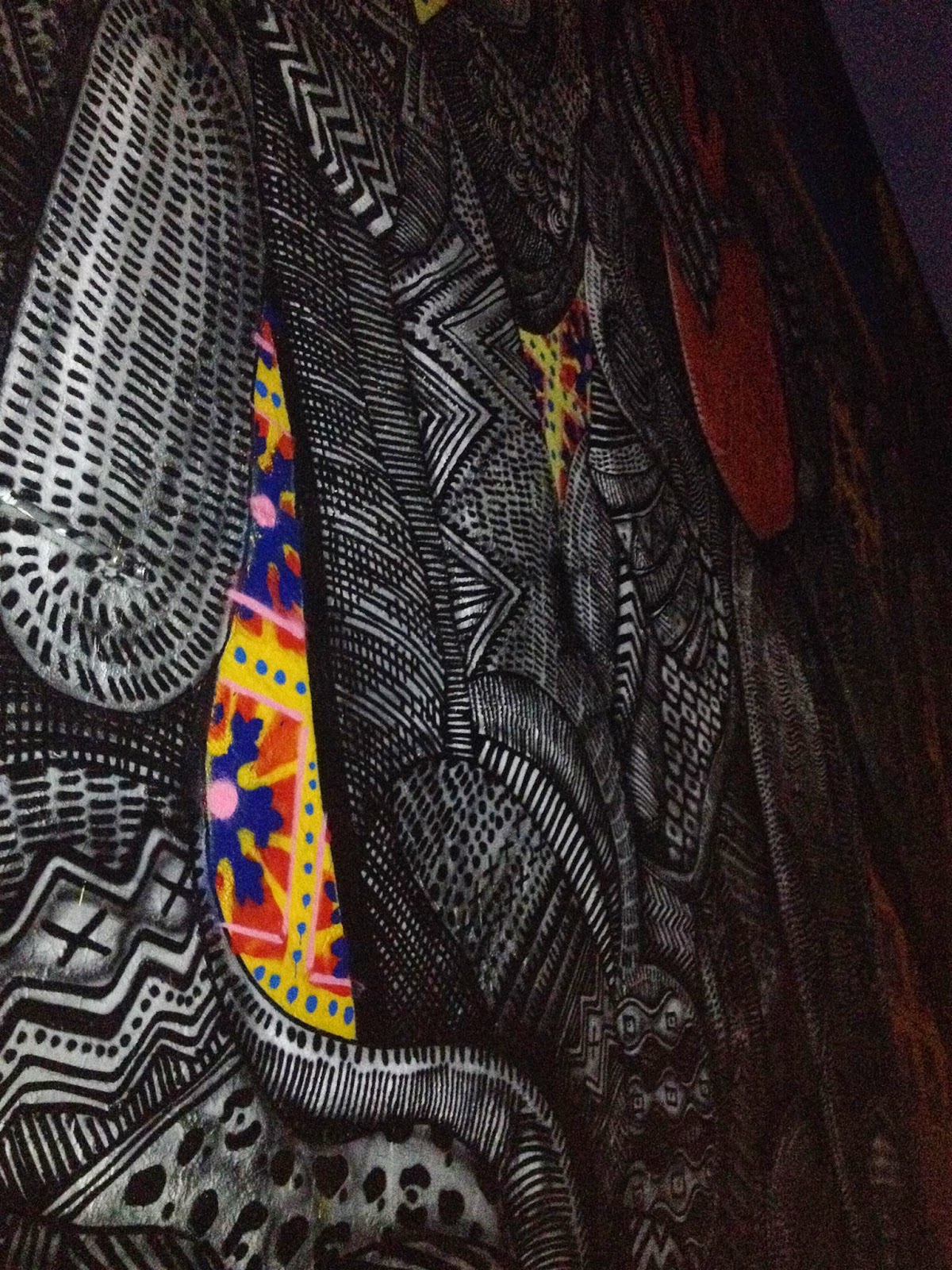 You just have to hand it to the crew at VAMP! in Oakland: they're developing quite a cool scene for improvised music over by Lake Merritt!
Bridge of Crows were collectively happy to get a chance to play at Spice Monkey as part of their Monday Night Avant Jazz and Experimental Noise series, and to be joined by Bob Marsh and Gretchen Jude.
Often when I play with Mika's groups, I get a feeling as if I'm playing some ancient, undiscovered music. Primal music, I guess, and last night featured many of those feelings for me. Additionally, I'm constantly amazed by the lock that Eli and Mika have with each other. I realize that they're father and son, but they play together like brothers.
At one point, Mika got down to some serious strumming that pretty much stopped everyone in the band; it was as if he'd set his tones for STUN!
I was happy to get to play a full forty five minutes, two pieces that were roughly sketched beforehand in rehearsal and emails. On the first piece, I started out with the Handsonic, but found myself somewhat unable to hear its sounds from the pa, so I switched to snare drum; I pretty much stayed with brushes and snare drum for the remainder of the set. When one pairs their options down, the questions arise: what to do? how to do it? how to maximize it?, and these certainly arose in my mind as we played. It felt satisfying to be able to try to coax a lot of sounds from a minimal set up! Hopefully these sounds meshed well with the rest of the group.
As usual, Eat the Sun were great. Their quietly intense improvisations are recommended!
Many thanks to all involved for a fun evening, and many thanks to those that came out and listened.

Below: setting up the Bridge 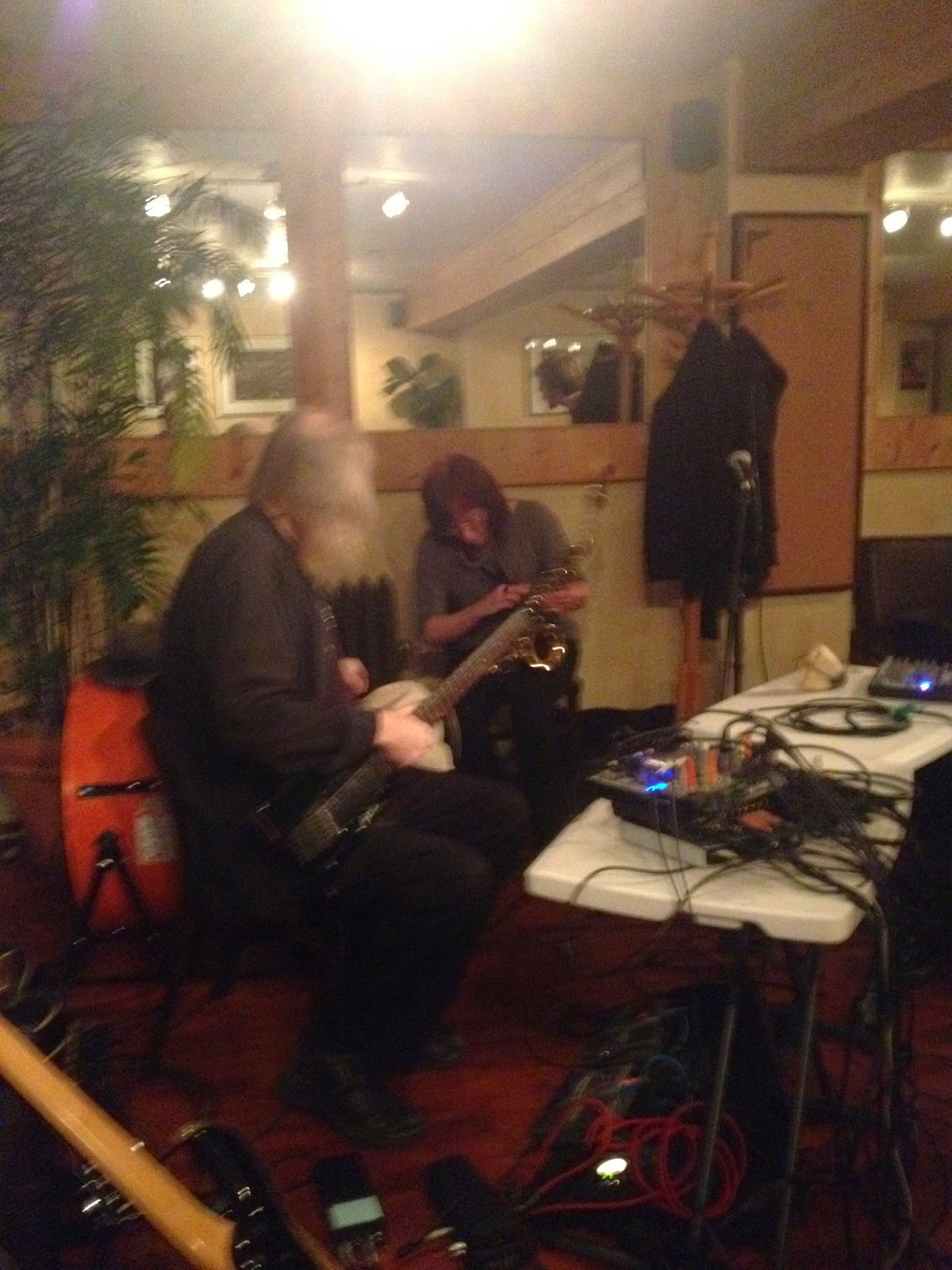 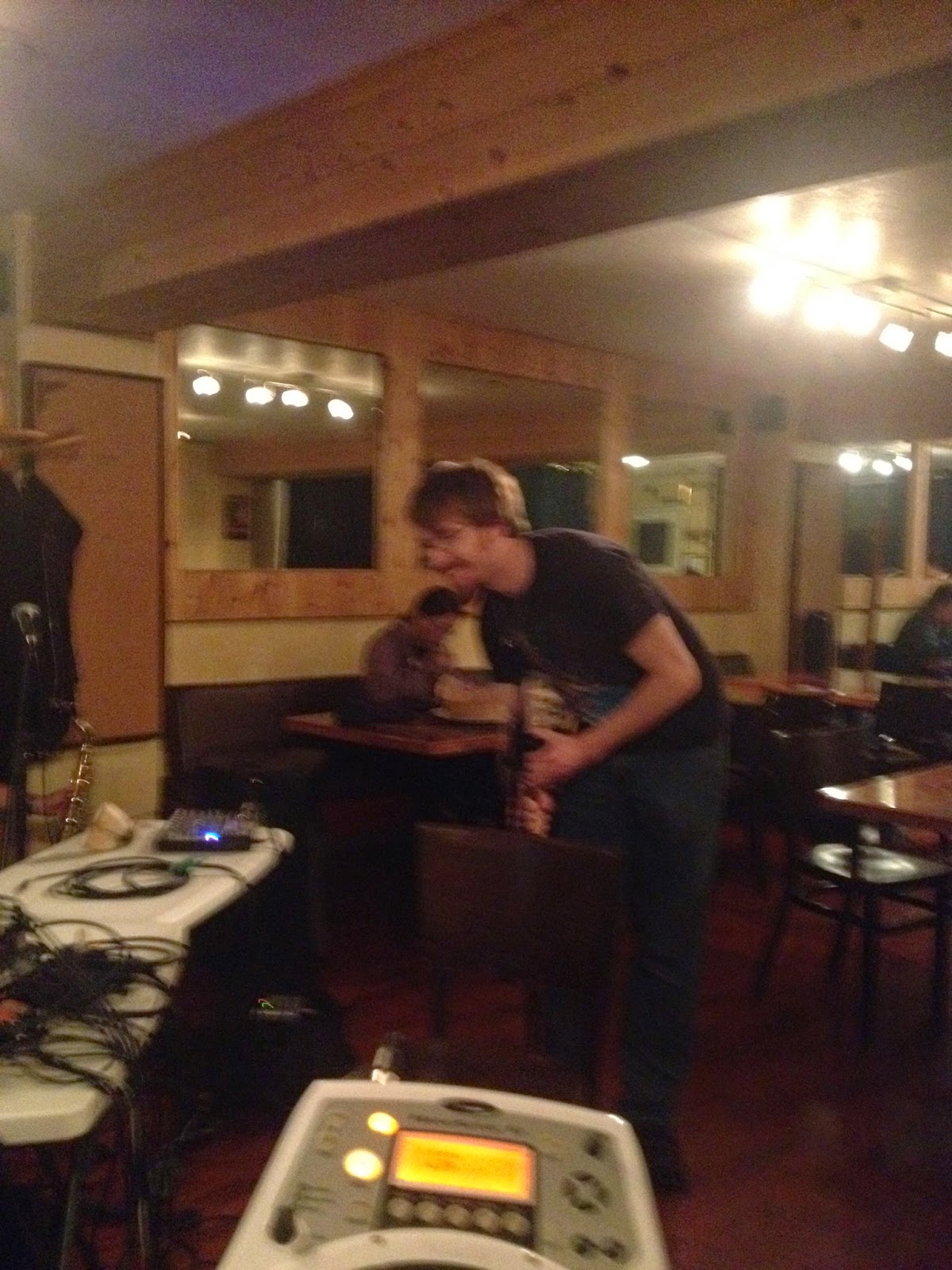 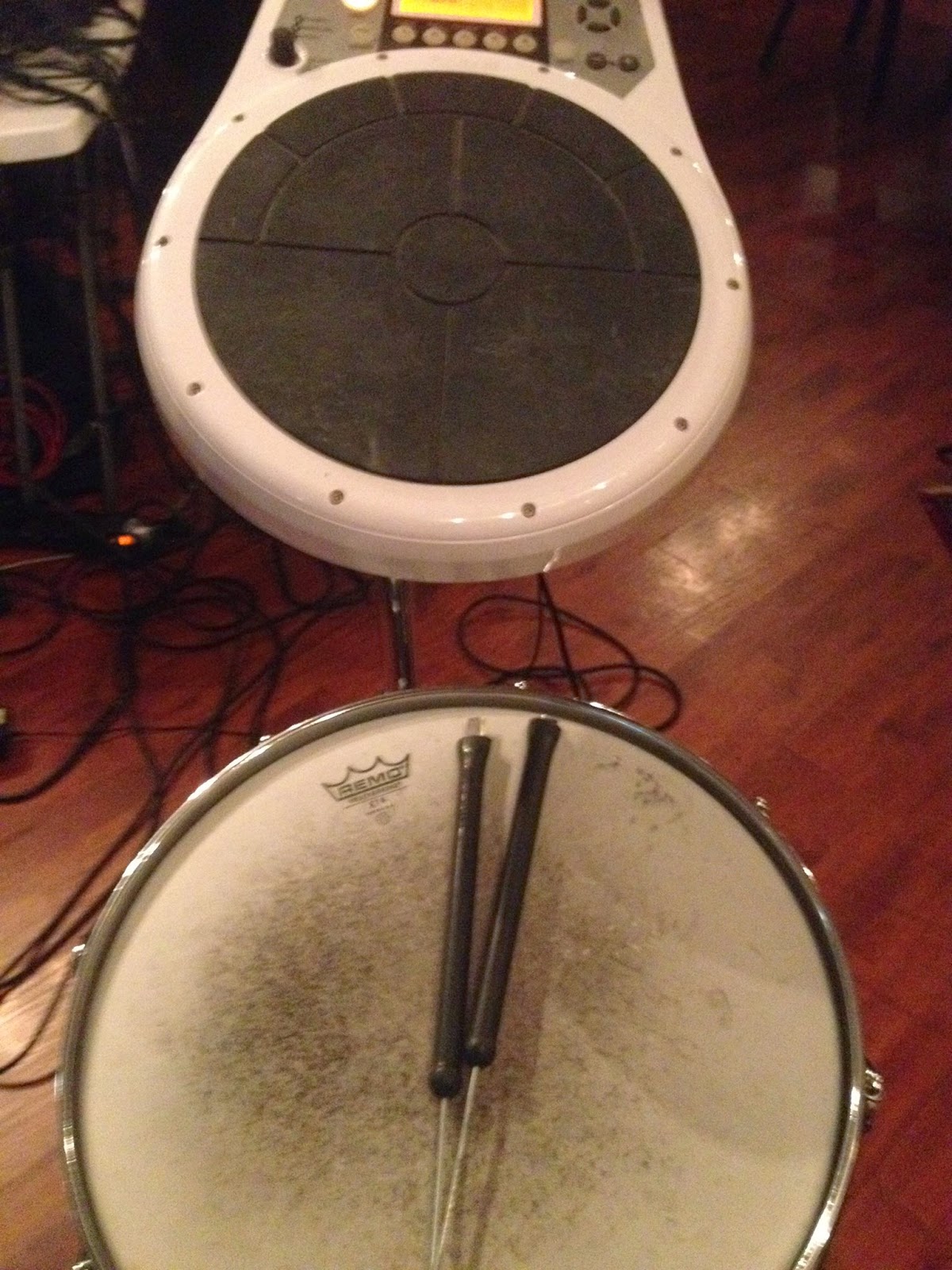 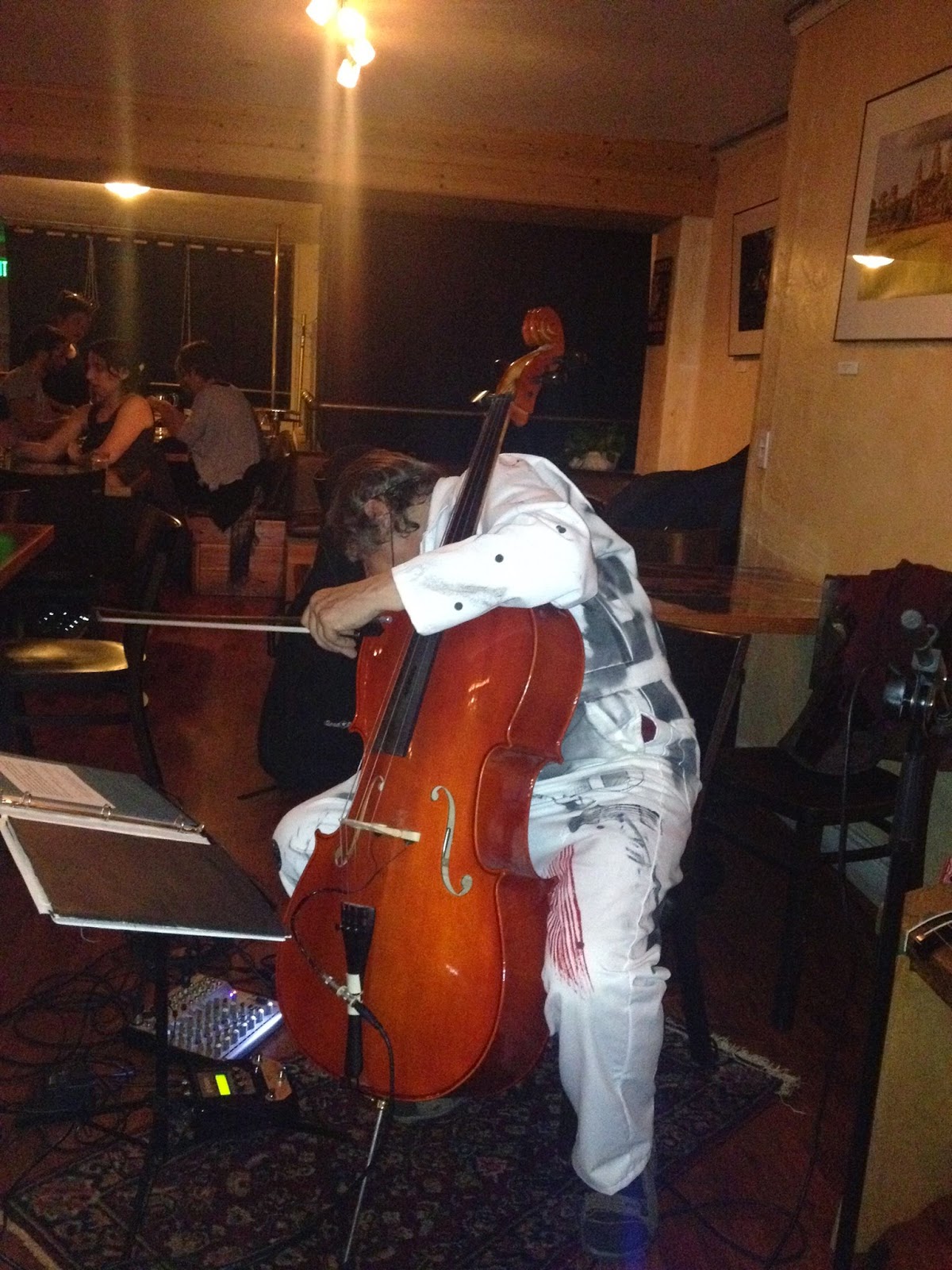 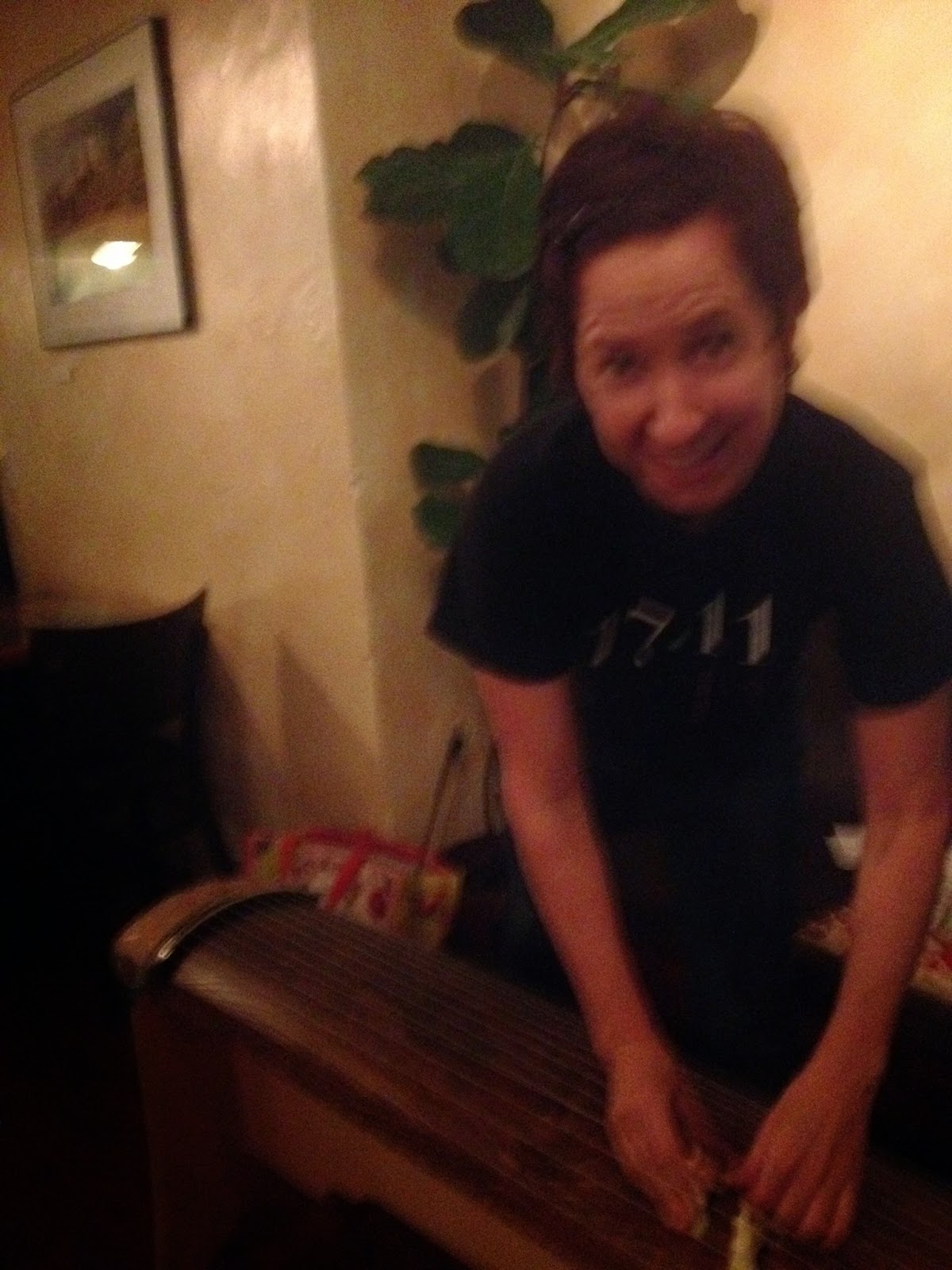 Posted by Mark Pino On Drums at 7:57 AM No comments:

I will play with Bridge of Crows this Monday! 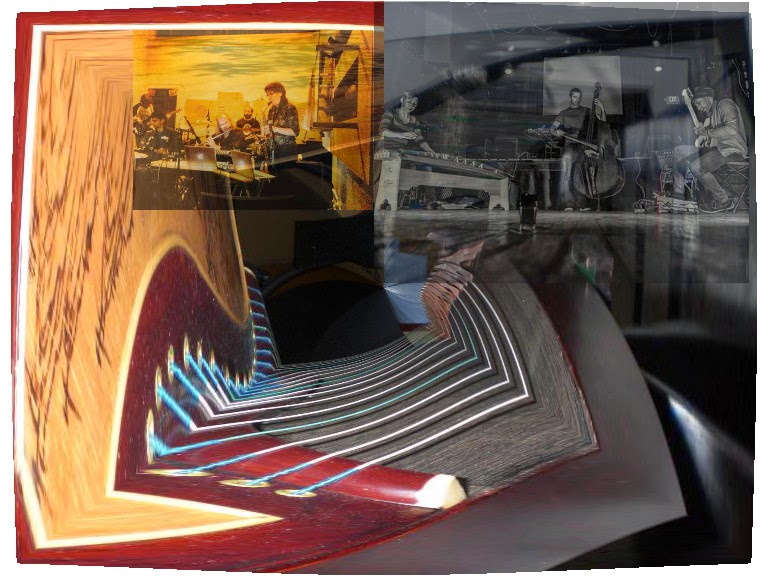 I'm very excited to announce that I'll play electronic and acoustic percussion with Bridge of Crows this Monday, 3/16, at Spice Monkey in Oakland!
Also on the bill are Eat the Sun, who are really great in their quiet intensity.
Super excited!
The show starts at 8:30 PM.
Spice Monkey is located at:
1628 Webster St. @17th St.
See you there!