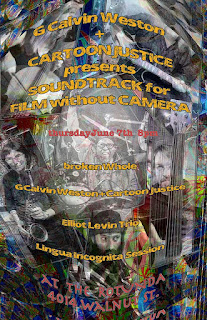 In early June, Cartoon Justice will be heading to the East Coast of the U.S. to play some shows!
Details:

There may be some changes to these lineups, but this is the most accurate view that I have so far. Looking forward to seeing some new venues and playing some shows on the East Coast!

Posted by Mark Pino On Drums at 6:14 AM No comments: 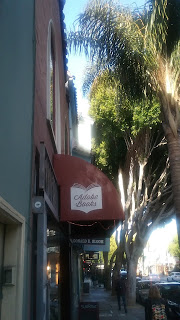 Another fun weekend of creative music making draws to an end, and I sit here somewhat drained but feeling very fulfilled!

Cartoon Justice/Broken Whole-Adobe Books, SF CA; 5/4/18
As Mika Pontecorvo loves to do, he set up a show in which new configurations of the core Cartoon Justice players would get to play with close/new associates. For Friday night's show at Adobe Books, he pulled in expert drummer Tim Orr to guest on two sets. The first set, played by Broken Whole, featured Mika on electronics processing plus Tim and I on drums. We got into some fun, interactive Electro-Acoustic zones. Things felt really subtle and linked, in a mostly quiet way. Lots of clicking percussion and whirring electronics processing. Eli eventually joined in on bass, and his extensions added some pretty great, block-like bass touches to the emerging sound. Super fun to get deep with Broken Whole!
After a brief break, Cartoon Justice brought its Harmelodic Punk Jazz in, with Tim continuing on drums. Things got pretty loud, pretty quickly. Our 6/8 jam, Spirit Aligned Truth, is really coming together nicely, going to some interesting places sonically. I'm feeling stoked that I can hold that rhythm down for longer and longer periods of time. We continued with two or three more improvisations, in which Mika played really inspired-he was clearly reveling in the sound. Kersti may have gotten a bit drowned out, which I felt bad about. We'll have to work on dynamics a bit. Cartoon Justice is getting heavy, that's for sure.

Below: Broken Whole/Cartoon Justice (photos by Josephine at Adobe Books; thanks, Josephine!) 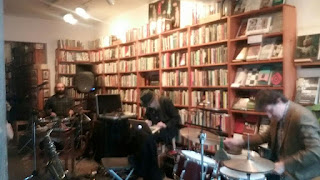 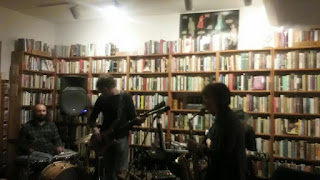 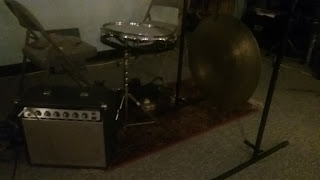 Amy Reed/Mark Pino Duo-Gold Lion Arts, Sacramento CA; 5/5/18
After a fun trip along 80 East with Melissa and yummy meal at a really fine downtown Sacramento eatery, I got to Gold Lion Arts for a set with Amy Reed as part of the series that she curates, the Ma Series. I kept things really simple for this set, with just the large roto tom, some gongs, and some shakers. This was by design, as I know Amy's music well enough to be aware that she keeps her set up quite minimal, too: just guitar and amp, usually. Amy did augment her rig with some samples of various voices, seemingly recorded by her "in the field". Quite inspiring, actually! At times I found myself playing along to them, at others simply listening to them and waiting. The set definitely had a spacious feel, but I recall things getting dense and frenetic at times as well. At one point, I swear that we sounded like Crazy Horse! It is always satisfying to play along with Amy's singular guitar techniques, that's for sure. I admire her aesthetics greatly. A set of chilled intensity, if that makes any sense!
After our set, Mooncake Trio played: if you get a chance, go and see them. Not so much a Power Trio, but a Subtle Trio. Really fine music coming from Vinkeloe, Hay, and Honda. 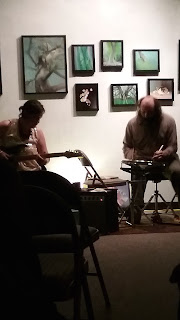 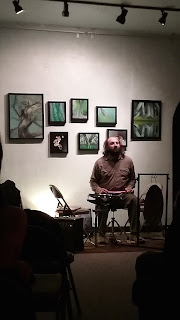 Stay tuned for Cartoon Justice tour dates later this month!
Posted by Mark Pino On Drums at 12:59 PM No comments: 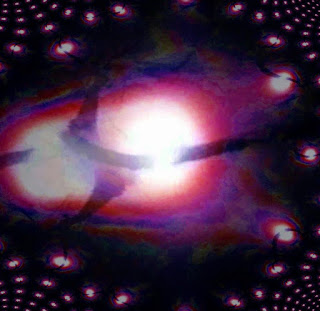 Looks to be an exciting weekend of improvisation and creative thinking!

From a great session with engineer Bill Wolter. We will have physical product available by the end of this year, if all goes according to plan......
Posted by Mark Pino On Drums at 4:14 PM No comments: