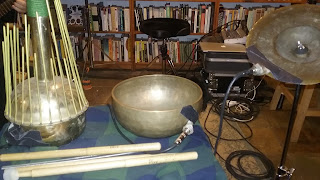 Ouch and double ouch, what a tough set.
In planning and rehearsal for our duo guitar/percussion/electronics set at Adobe Books, things went really smoothly. Our line check showed all sounds sending signals to the software. Yet, something seemed to go horribly wrong, and only one of my percussion items, the waterphone, was showing up within Mika's Mac for processing. This left me feeling limp; instead of trying to "make something happen", I simply held back, probably too much, and just listened quietly to what sounds were able to emerge. Some kind of ghost in the machine came and haunted us, and it just fizzled slowly. In front of an audience.
Man, what a tough set.
Did I mention, "ouch"?
On the bright side, I found a sought-after copy of Western Lands, Wm. Burroughs last novel, that I've been hankering to read.

Below: Mika and Mark, trying to figure out what's going on (photo by Josephine at Adobe Books, thanks Josephine) 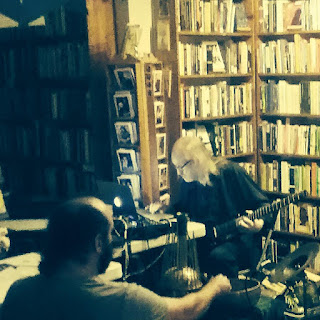 We've had some good rehearsals/planning sessions for the set, and I'm looking forward to trying out our ideas.

Posted by Mark Pino On Drums at 6:31 AM No comments: 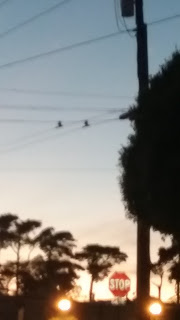 The above picture seems to me to be a pretty good representation of the weather in SF as Andrew J. and I pulled up into the Haight for M-KAT Ensemble's Bindery show. One of those beautiful early autumn evenings that blended heat and wonderful light from the west. Man, what a lovely evening.
Last time that I played within the space that holds the Bindery, it had been a kind of raw food court type deal; now, it seems as though this bookstore/performance space is getting well established. Walking in, I felt nice memories from seeing various Bay Area musicians. Most definitely a fine and talented group of people.
As for the music, I had decided to let the heat-mellowed energy of the day seep in to my playing, with a resolve to not rush and to just let our set unfold. Bindery booker James set up with a limit of 20-30 minutes' playing time, and after brief discussion, the members of M-KAT Ensemble decided to "just play", with no plan per se, so I figured it would help to slow the pace and give our set some time to unfold. Thankfully, I was able to calm my mind and indeed let things happen, savoring the sound of Jacob Felix Heule's sweetly tuned trap set, which he graciously allowed me to play. The energy levels eventually began to rise, and it seemed as though we got to some pretty good, interactive improvised spaces with it. The energy rose and fell with a good, relaxed pace. Loose but connected, I'd say.
I only wish that we could have played a bit longer! Here's to hoping for more M-KAT gigs soon. 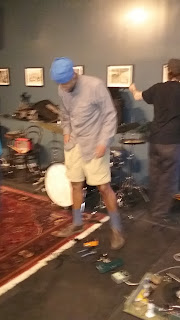 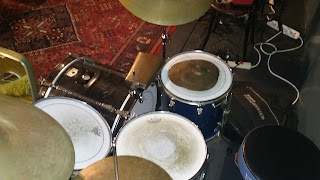 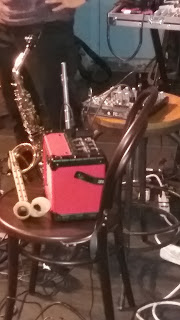 Posted by Mark Pino On Drums at 4:24 PM No comments:

M-KAT Ensemble this Wednesday in SF! 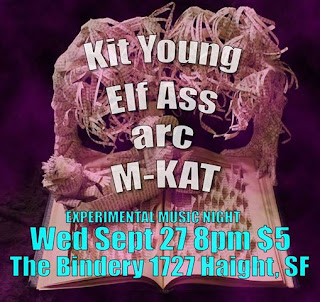 We look forward to playing!
Posted by Mark Pino On Drums at 9:39 AM No comments: 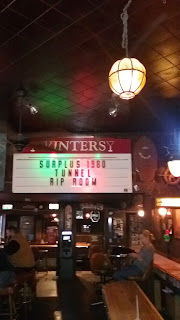 In what was presumably Surplus 1980's last public show for this year, we convened at Pacifica's venerable Winters Tavern on a Saturday night with the feel of autumn very much in the air.
I am always fascinated by Pacifica's unique blend of So Cal and Nor Cal. It sits squarely between the two, and has feels from both. Its sea salt swept hermetic vibe is really strange and appealing. I took a couple of walks around the neighborhood in which Winters is located in order to soak it up. On the first one, I saw a beautiful shade of orange-red on the hillside. Spectacular.
After a somewhat shaky rehearsal during the week, I spent as much time as I could re-learning certain aspects to Surplus' set. The songs can be somewhat tricky, and it just doesn't help to sleep on their changes. This worked for me: from Moe!'s opening beat of Pigeon Obstacle Course, I felt confident and aware of the changes. Inspired, really. It didn't hurt that the drummers from the two previous bands, Rip Room and the Tunnel, are so good. I dug on watching both of them as they drummed.
Surplus made through our current big opus, Temporarily Present, with only a small clam by me during the first part of the song. That one is getting really fun. Ten epic minutes of rumination on death. Good times!
Things got a bit weird during Failure of Commitment, as the electrical source for the entire stage went down. I decided to just keep up with the 16th note beat that drives the bridge section. I flashed on a story about Jaki Leibeziet that I'd read, in which the same thing happened during a Can set, and he just kept up with his drum pattern. Really, I resolved to play until I was physically stopped. Thankfully, no need for that. Nelly, Moe!, Bill, and Melne got their juice back and came back in, right on cue. Excellent.
Our set finished with good versions of John Cage's Perilous Night, Question After Ended Question, A Motivated Song About Procrastination, and, at the insistence of the audience, Morale Is High.
After a really fun night of music, I took the long way home, cruising up busy 19th Ave. in San Francisco and over to the Richmond-San Rafael Bridge by way of the Golden Gate Bridge. Richmond Parkway is kind of spooky at 1AM in the glow of the Chevron refinery.
Surplus 1980 will hit the studio in October and November. I'm really excited to get all of the past couple years' hard work documented. 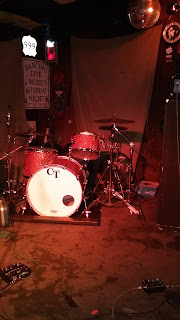 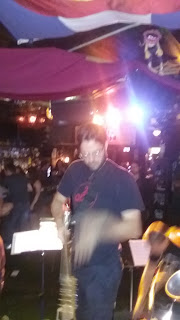 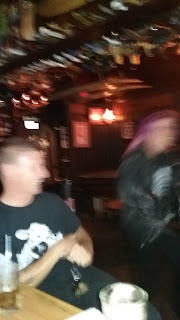 Above: funny blurry shots of Bill, Moe! and Mel
Below: Mike Watt's bass on the wall of Winters Tavern 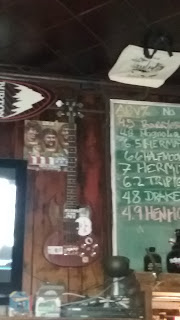 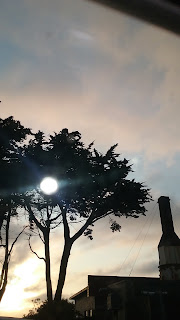 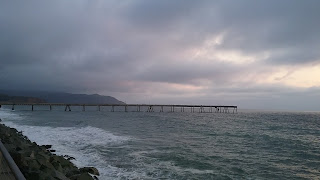 Above: moody Pacifica shots, such a lovely area 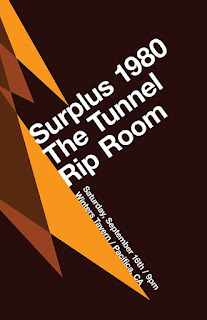 Posted by Mark Pino On Drums at 4:29 PM No comments: 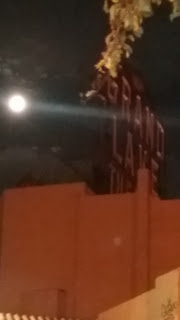 After a sweltering three day heat wave in the Bay Area, it felt really nice to be driving into Oakland on Labor Day evening under temps merely in the 70's. People were out, too. Often when I pull up to Studio Grand for a gig, folks have already scattered from the Grand Lake District for other spots. Not so last night, true, thankfully also, at Studio Grand.
M-KAT Ensemble had a nice little group of people to play for. We were grateful for that. We started our set off with yet another graphic score, entitled Sandbar Music. Its concept was inspired by looking at sandbars in Maine in August. I was fascinated with the way the elements of sand, water, light, and shape all share the same space but do not necessarily interact in any obvious way. Instructions on the score prompted the theremin, winds, bass, and drums to play according to that type of parameter. It seemed as though we were able to develop a decent improvisation from it. After that one, we did three more short pieces, the last of which, featuring Kersti's flute, really seemed to take flight in a cool way. Also of note was the strange Industrial-like timbre achieved from Thomas's bass melding with Andrew's theremin. M-KAT seems to have some kind of almost junkyard feel at times. This is cool to me: I say that we pursue it! I was relatively happy with my playing, as it seemed like I was able to dig in and intuitively feel my way for most of the 38 minute set.
After M-KAT, Andrew Jamieson and Charles Peoples III did an incredibly cool duo of voice and piano, utilizing meditation techniques and audience participation to get to some very evocative and subtle spaces. Those guys are great, seek 'em out.
A fun night in which to decompress from the previous days' stifling heat!
M-KAT will play in SF later this month!
Many thanks as always to Oakland Freedom Jazz Society. Fernando rocks.

Below: M-KAT Ensemble sets up; drums 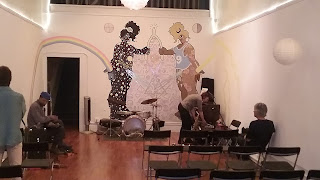 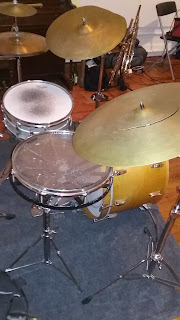 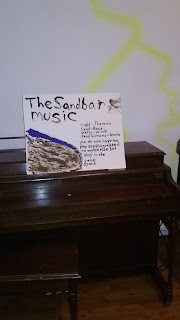 Above: The Sandbar Music graphic score, acrylic paint on paper

M-KAT Ensemble this Monday in Oakland! 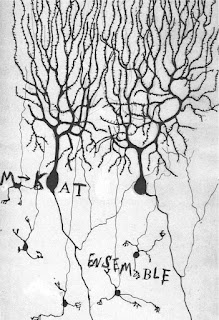 Hopefully some people will go! We'll be there, anyway.

Posted by Mark Pino On Drums at 6:45 AM No comments: