January looks to be pretty busy. Two to start.... 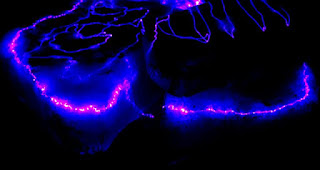 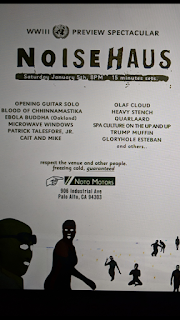 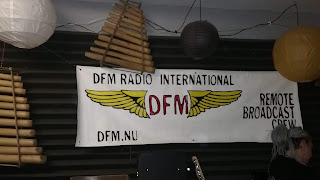 Minus one because, sadly, Jack Hertz got caught in some terrible San Francisco mid-rain storm traffic and was not able to make it over to dAS and Ninah's studio for our Dead City Shaman set. Such a bummer! The three of us soldiered on, and I was plenty pleased with our two sets.
The first set featured a great, long loop from Ninah, as well as her flutes, trance harmonium from dAS, and me tweaking out on a digital delay pedal that was hooked into a contact mic and placed on my roto toms. In all of my years of playing, I've never really used that sort of set up. I went kind of crazy on it. Just really enjoyed those repeated sounds. We got into what felt like some really cool British-style Industrial areas, with a lot of electronic buzzing and waterphone percussion as well. That was all totally fine with me. A good mixture, for sure.
After a break, our second set lead off with bowed waterphone solo. At some point Ninah and dAS joined in and we got a really delicious mixture of squirrelly electronic sounds and rolling roto tom rhythms. This part of the evening lead to some really fine, shamanic feelings if I do say so. I felt pretty ecstatic, anyway.
Things went by so fast at Chakra Chimp Research Kitchens, as they always seem to. Such a fine way to the end the year's performances. I just wish that Jack could have made it across the Bay Bridge. Stay tuned for a re-do this coming Spring.
Happy Holidays everyone.

Below: dAS and Ninah doing their things; my gear (with raincoat, it was pouring) 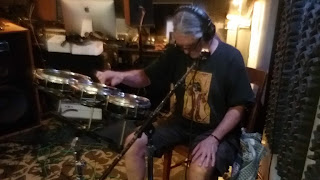 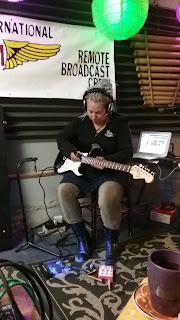 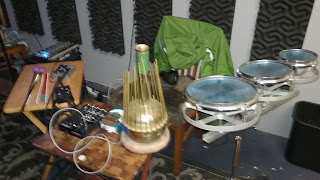 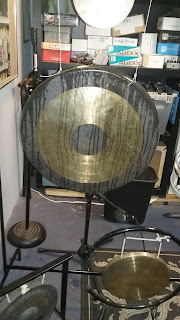 Above: I forgot to mention that dAS got out the gongs. Yes, I was a happy camper.
Below: UB Radio Salon #570 audio at Archive.org:

Posted by Mark Pino On Drums at 5:08 PM No comments: 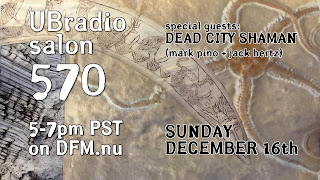 My last gig of this busy year kind of brings things full circle, seeing as that Dead City Shaman was an early gig of 2018, late January I believe.

Hoping to end this musical year in grand way with Jack, Ninah Pixie, and Das!
Posted by Mark Pino On Drums at 6:02 PM No comments:

Reflecting upon Saturday and Sunday's shows, the one thing that strikes me is how long I've played within the two groups that I was with. Ear Spray, five and one half years; Crow Crash Radio, seven. It helps that neither of them rehearse too much. They definitely stay interesting that way. I used to love rehearsals, but as I age they get harder and harder to retain any interesting factors. Man, that sounds jaded! Urgh. OK, let's be enthusiastic about said shows, shall we? 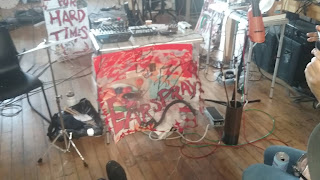 Ear Spray-Noisebridge Hackerspace, San Francisco; 12/8/18
I very nearly didn't even make it to this show. Weirdness on BART found me sitting on a stopped train for a long time, several minutes away from 16th/Mission station. Thankfully, I made it to Noisebridge a bit before 12PM, the sharp start time for Godwaffle Noisepancakes events, simultaneously bumping into Carlos, who had also been delayed. Turns out that there were other delays as well (is Mercury still retrograde?), so I was able to hook up my very simple rig of one cymbal, contact mic'd, to Carlos's mixing board in plenty of time to do our set. The set started out with Ann on solo electric cello, an instrument that she's getting quite adept at coaxing Noise out of. Carlos and I joined in after what seemed like a good amount of time. We had planned out a 20 minute set, made up of four  movements, each five minutes long, that would arc to a crescendo and then stop, with a small sound leading to the next movement. This plan went pretty well until we we reminded that our set had to be truncated to make up lost time in light of a hard 2PM stop time. Our set came to kind of a stumbling, jumbled halt, which felt kind of lame. The rough recording shows us interacting what seems like an effective way, with plenty of silences along with some nice, jarring noise, especially from the electronics and lone cymbal. Hopefully we'll have this one up at Bandcamp soon, because it seems worth sharing. Sorry that we went a bit long, Grux.

Below: such a simple rig; Carlos setting up in a rush 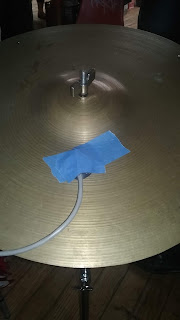 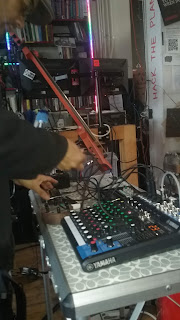 Below: Ear Spray video, by and courtesy of Ann! Thanks Ann! 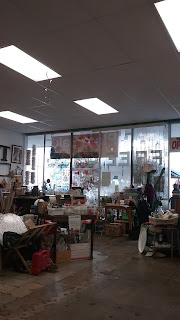 Crow Crash Radio-Free Oakland UP!, Oakland; 12/9/18
No delays presented themselves for Crow Crash Radio's Sunday afternoon gig at Free Oakland Utopian Project. Indeed, I got there really early and found some good Samba LP's in the free bin. How does one say "SCORE!" in Portuguese? We set up the afternoon's proceedings so that Angel Archer and Crow Crash would alternate short sets, and this plan worked beautifully. Brian Lucas and Sheila Bosco cooked up some really great Psychedelic Ambient pieces that were quite inspiring to play after. Crow Crash presented one new tune, Uncle Sleep, which seemed to go over well, in a first set of longer, droning numbers. It's got a fun groove to try. Our second set had Brian Strang playing his resonator guitar as we went for a bit more of a Country feel. I enjoyed using brushes throughout both, save for some mallet work to begin the first one. At the end of the afternoon, Angel Archer and Crow Crash Radio combined to play a freaky 20 minute jam that reminded me of early Hawkwind, not a bad result at all. Upon leaving, I asked Free Oakland UP's Jocelyn Maggait how she did with the day's fundraising activities. She replied that did alright, so the day was a double win for me.

Below: my old faithful Ludwigs at Free Oakland UP! 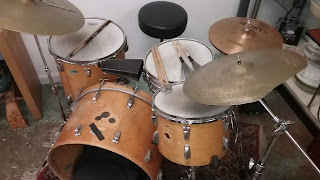 To get back to my initial thoughts, it's tough to believe that I've played with Crow Crash Radio and Ear Spray for so long. Both of these humble projects soldier on, in the face of pretty much blanket indifference and non-recognition. I don't really mind, as they continue to prove themselves to be fun and fulfilling, even on a "weekend warrior" type of schedule. We'll see where they end up playing in 2019 I hope.

Posted by Mark Pino On Drums at 5:08 PM No comments:

OK, after a bit of a quiet November, I'll be ending the year with a few shows this weekend! 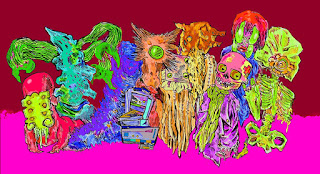 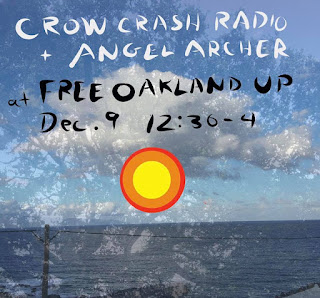 It's nice to be playing in this busy time of the year!

Posted by Mark Pino On Drums at 6:35 PM No comments: