Playing this Sunday on KPFA! 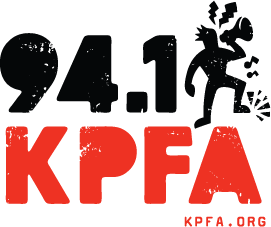 We will play until midnight, ring in the New Year, and then play for another hour. Expect Electro-Acoustic madness to ensue!

Posted by Mark Pino On Drums at 5:01 PM No comments:

Many thanks to Charles Smith, Outsound Presents, Amy Reed, and CJ McCaslin.
Posted by Mark Pino On Drums at 8:59 AM No comments: 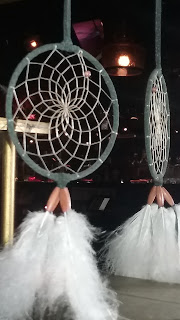 Having been an El Cerrito resident for several years, I am very familiar with the Ivy Room. I can't say that I ever spent any time there before last night, and that, even as there have several reportedly great Improvised Music shows there of late. Seems as though I'm always at a rehearsal or gig when they happen. My first performance with Radical Medicine Theater Movement International provided me with my first chance to hang out and play there.
A cool space, too, with a decent stage, good sound system, and homey vibes. The Ivy Room seems like a winner.
For the performance, Decoy Gallerina, Miguel Garcia, and me played four distinct pieces, all made up of music, poetry, and dance. The uniting theme for them was a theme of protest against the treatment of protesters at Standing Rock and the current political paradigm. especially President Trump. I'm not a particularly political person myself, especially when it's come to my music, but I am a big admirer of Decoy's art, and as such will gladly support her in her statements. Freedom of speech is very important.
We essentially played four short, 15-30 minute sets, all meant to be connected, but broken up by other performers' pieces. This flow felt a bit disconnected to me, but it was cool to hear other musicians sing and play. I felt as though our best sounds were achieved earlier in the evening. By night's end, I was really tired and probably showed it in my playing. Still, our last set featured a sound that I've dubbed First Nation Grime, a Punk Rock/Electronic hybrid that features great flute playing from Miguel and manic dance moves from Decoy. Actually, all of the music for this set blended electronics and programmed percussion with singing, dance, and my acoustic drumming, done on my old reliable and increasingly banged up 1970's blond Ludwig. I'd say that overall, the set was a bit jittery, a "first show together" kind of feel, with nerves sometimes getting the better of all of us, but a nice manic energy pulling us through the experience.
A fun, creative night, especially in light of being surrounded by Decoy's great visual, performance, and spoken art and Miguel's deeply creative sound creation. 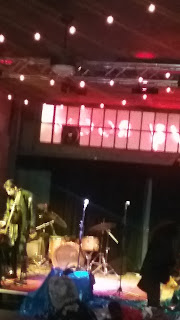 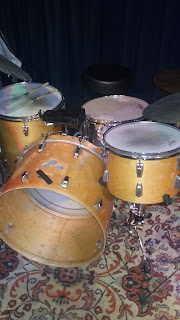 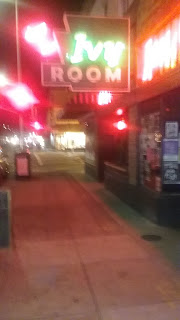 Above: Cold lit Ivy Room, 42 degrees and dropping
Below: cool sculptural assemblage by Decoy Gallerina, whose creativity knows no bounds 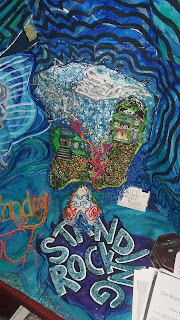 Below: Decoy and Mark (photo courtesy of Claude Palmer, thanks, Claude!) 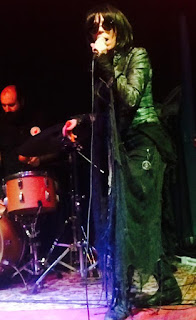 Posted by Mark Pino On Drums at 8:01 PM No comments:

Playing this Thursday in Albany! 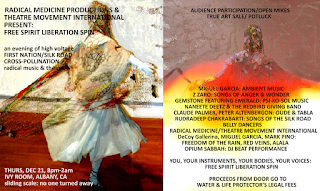 This Thursday, 12/21, I will be playing with Decoy Gallerina and Miguel Garcia at the Ivy Room in Albany CA. The event will be a benefit to raise money for people that remain imprisoned after protesting against the Dakota Access Pipeline last year.

It's been almost 15 since I performed with Decoy, and I'm really excited about renewing this valued collaboration.

Posted by Mark Pino On Drums at 9:54 AM No comments: 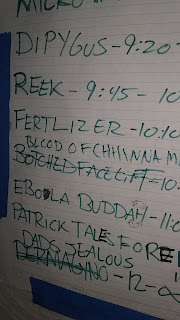 After a really quick trip down to Palo Alto from Richmond, a minor miracle in light of the insane traffic patterns that currently reign in the Bay Area, I found myself inside of the Garage, being blown away by several POWERFUL Noise and Grind acts. It was a pleasure to share a bill with all of them. Just great impact all around.
ebolabuddha began our 25 minute set in the Garage (by the way, the place is quite literally a garage, with cars up on lifts and in various states of repair), freezing in the cold December air. I started off reading from a college text about Medieval heresies, which was fun. It seemed as though we didn't get a ton of audience buy in, or maybe I just didn't hear people reading. Not that that seemed to matter to me. Within a few minutes I was at the beat up NoiseHaus trap set, beating out what I felt was some kind of homage to the now departed Sunny Murray. The guitars of Steve and Lorenzo were great, noisy and out there, with Tom's alto sax scrawl up atop them and Eli's bass moves shaking below. It felt energetic, even though I was somewhat bummed about having to try to navigate a beat up, falling apart set of drums while dealing with frazzled nerves. Things stayed pretty much in this one quite jacked up sonic zone, apropos for Noise, at least in my opinion. We ended with a two minute blast beat and a manic rant from Mr. Weeks. Good times, albeit somewhat odd for me, emotionally, as I'd behaved kind of like a dick to a slam dancer in audience a bit earlier. Apologies to that dude, I just freaked out when your elbow hit me in the stomach.
A humbling evening on many levels, for sure.
Glad to have taken that ride, though.

Below: beat drums, and The Shining, which was being broadcast simultaneous to the NoiseHaus set 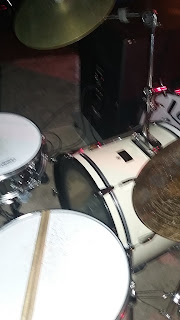 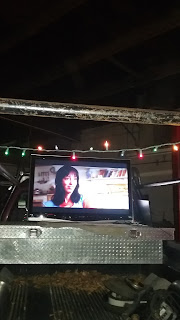 Posted by Mark Pino On Drums at 2:29 AM No comments: 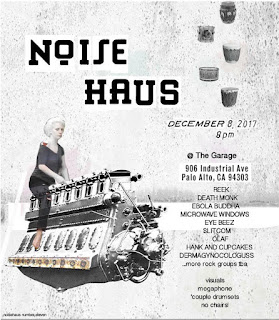