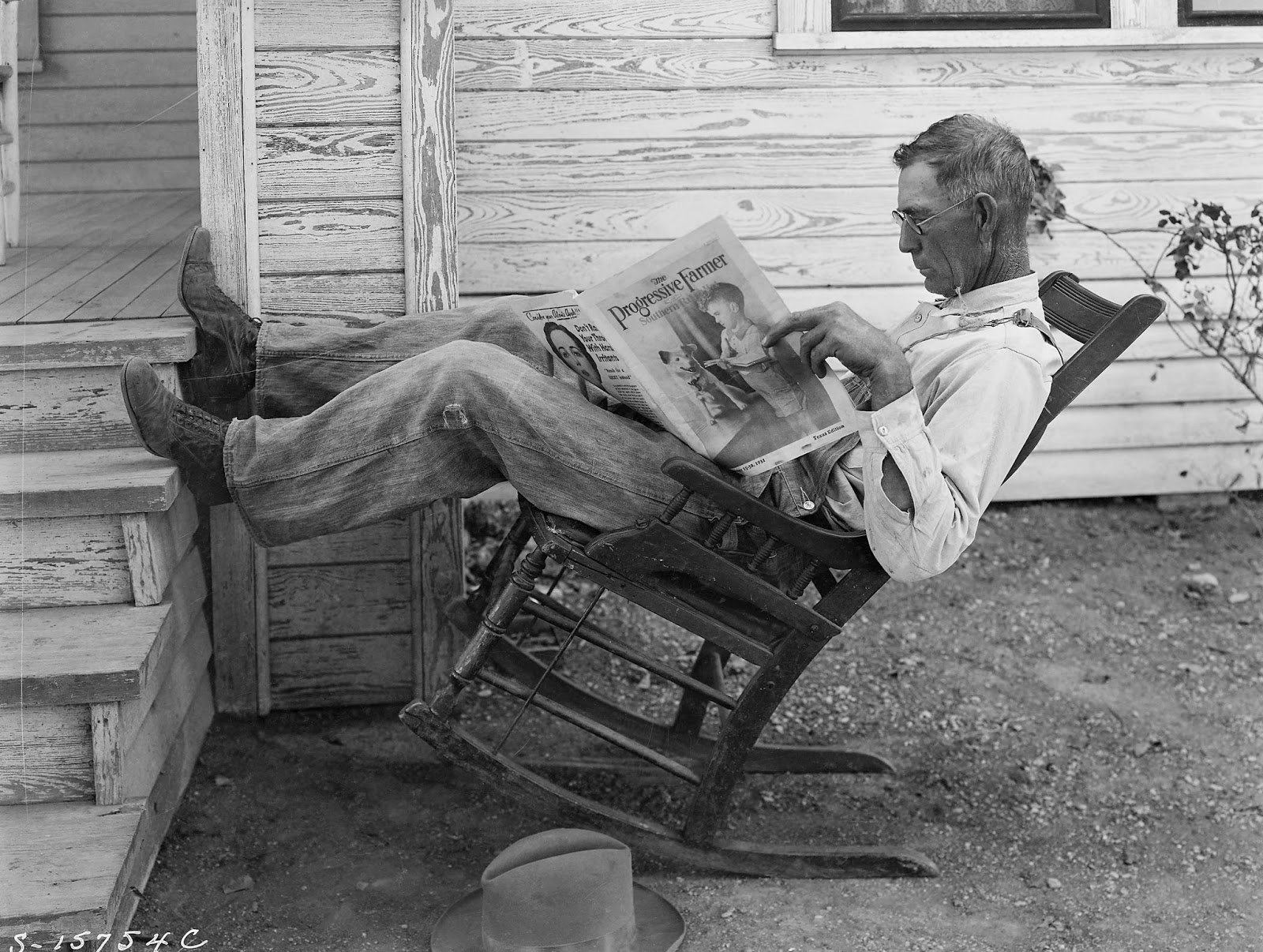 My partner in Kosmiche, Andrew Joron, has recently become a very close neighbor in El Cerrito. We convened last week and recorded a bit!

Congratulations to Andrew and Rose on their new house!
Posted by Mark Pino On Drums at 5:34 PM No comments: 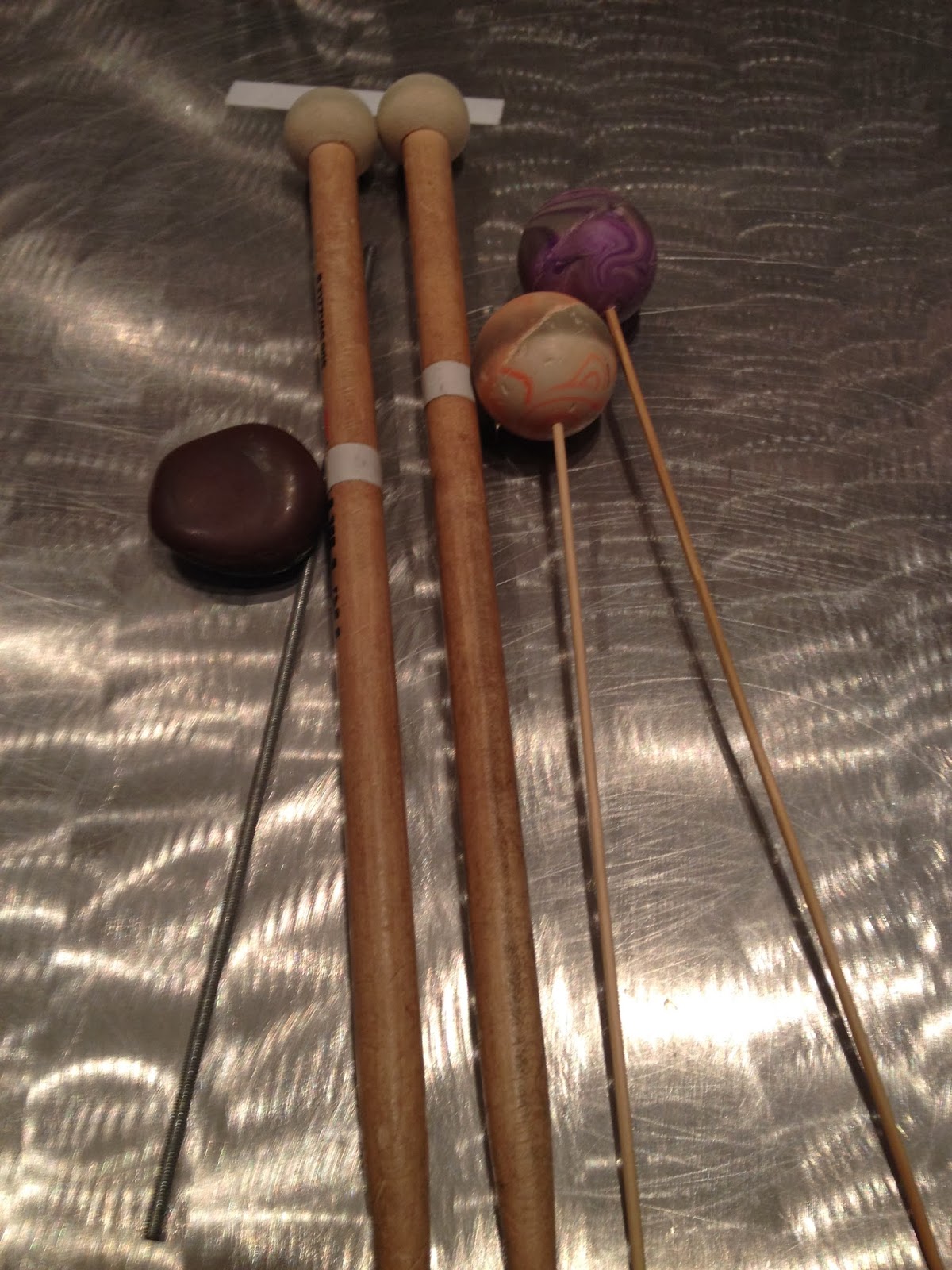 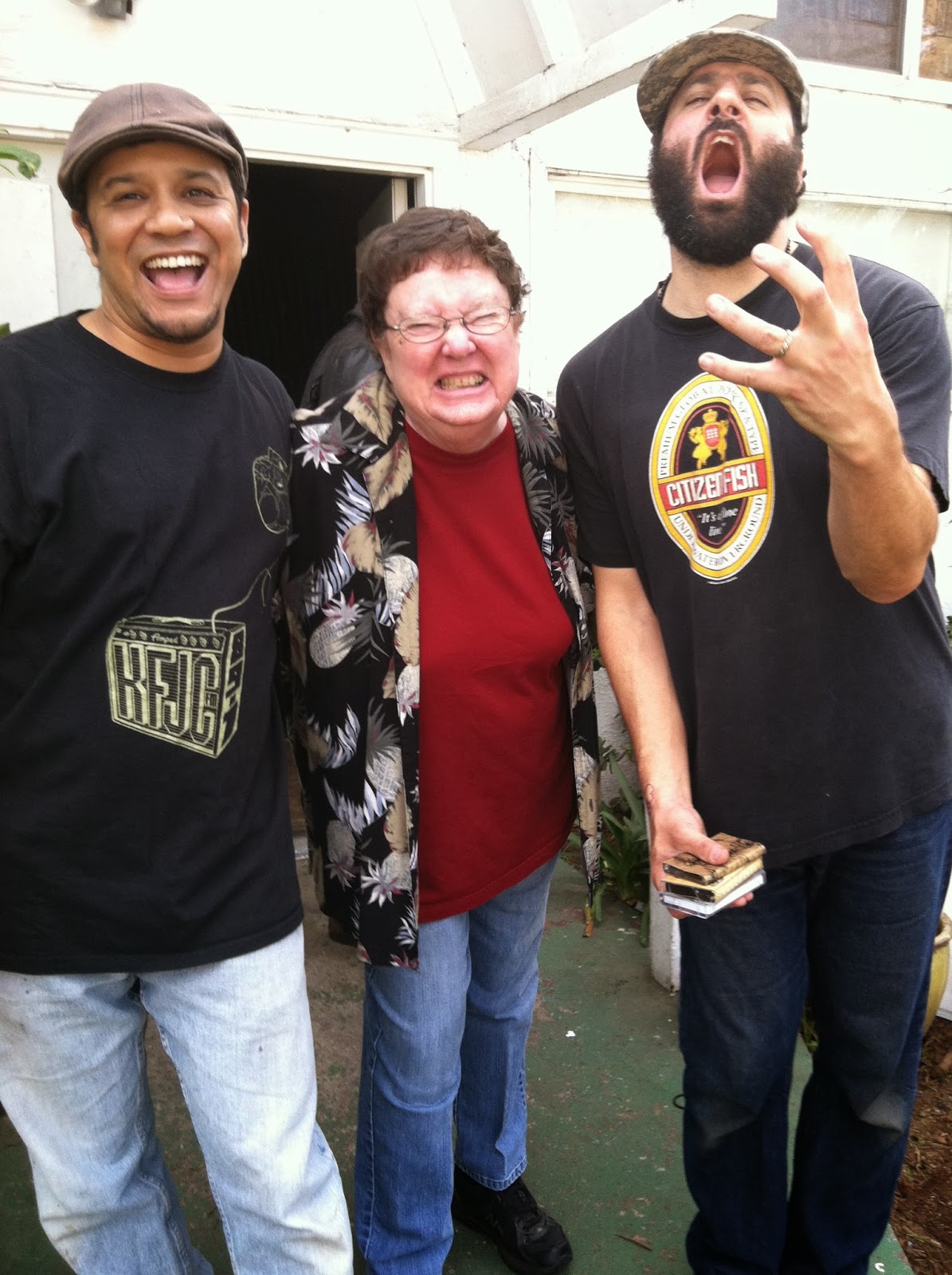 You just gotta love Grux's Godwaffle Noise Pancakes series. Damned if the thing doesn't always draw people, and real down to earth freaky people at that. Just so great!
Anyway, Earspray did about nineteen minutes of our somewhat noisy trio action, filling up Life Changing Ministry's GROOVY space (go there for a show if you live in Bay!). I stuck mostly with the Nunn Plate, only playing one bowed cymbal a little bit.
Things felt fine to me. I am really beginning to hear the odd beauty of Ann's singing/screaming, and Carlos does neat stuff with his cheap keyboard and custom pedals. All of the other bands were cool, too. And, yes, pancakes. Mmmmmmmmm....... 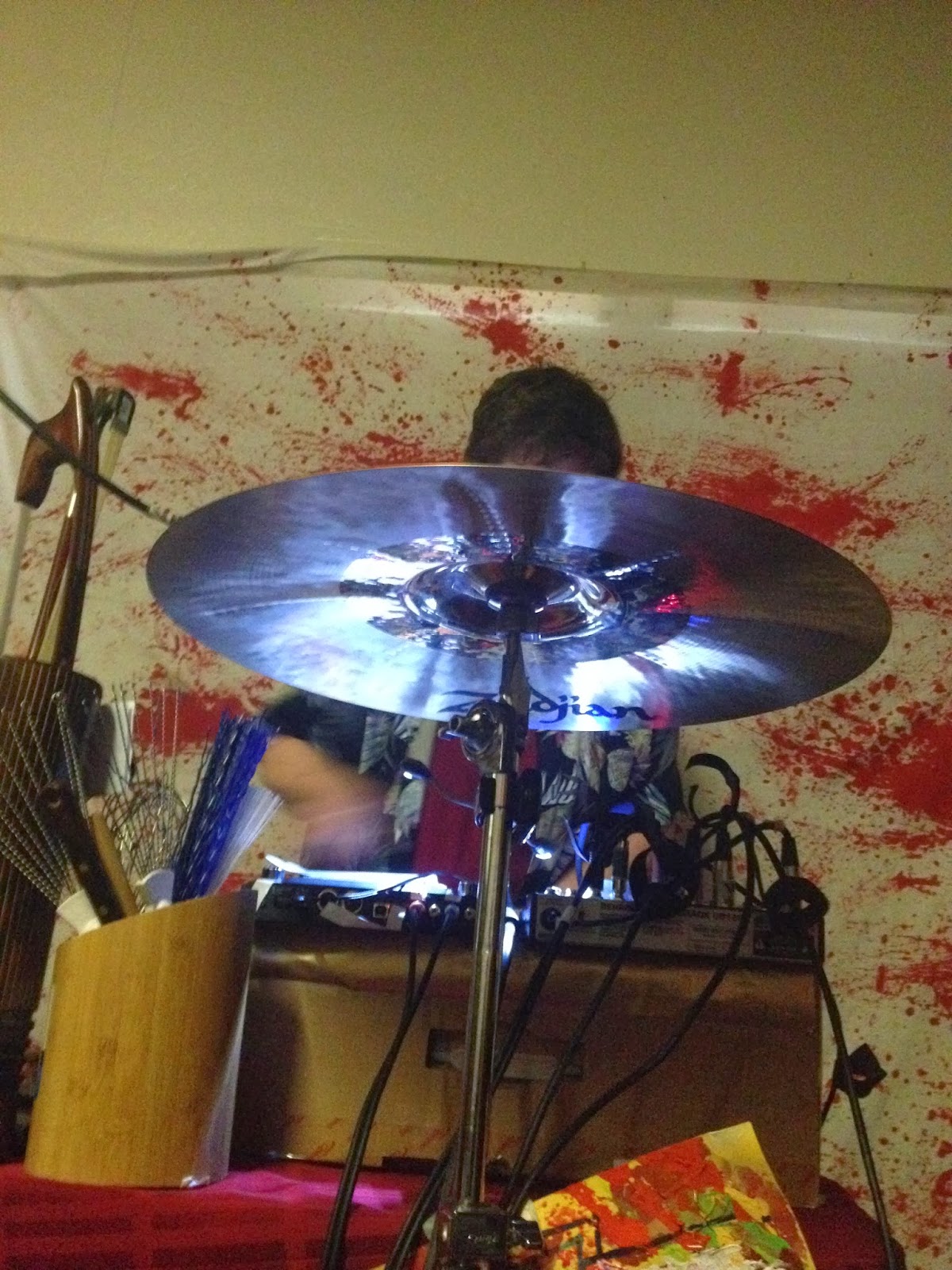 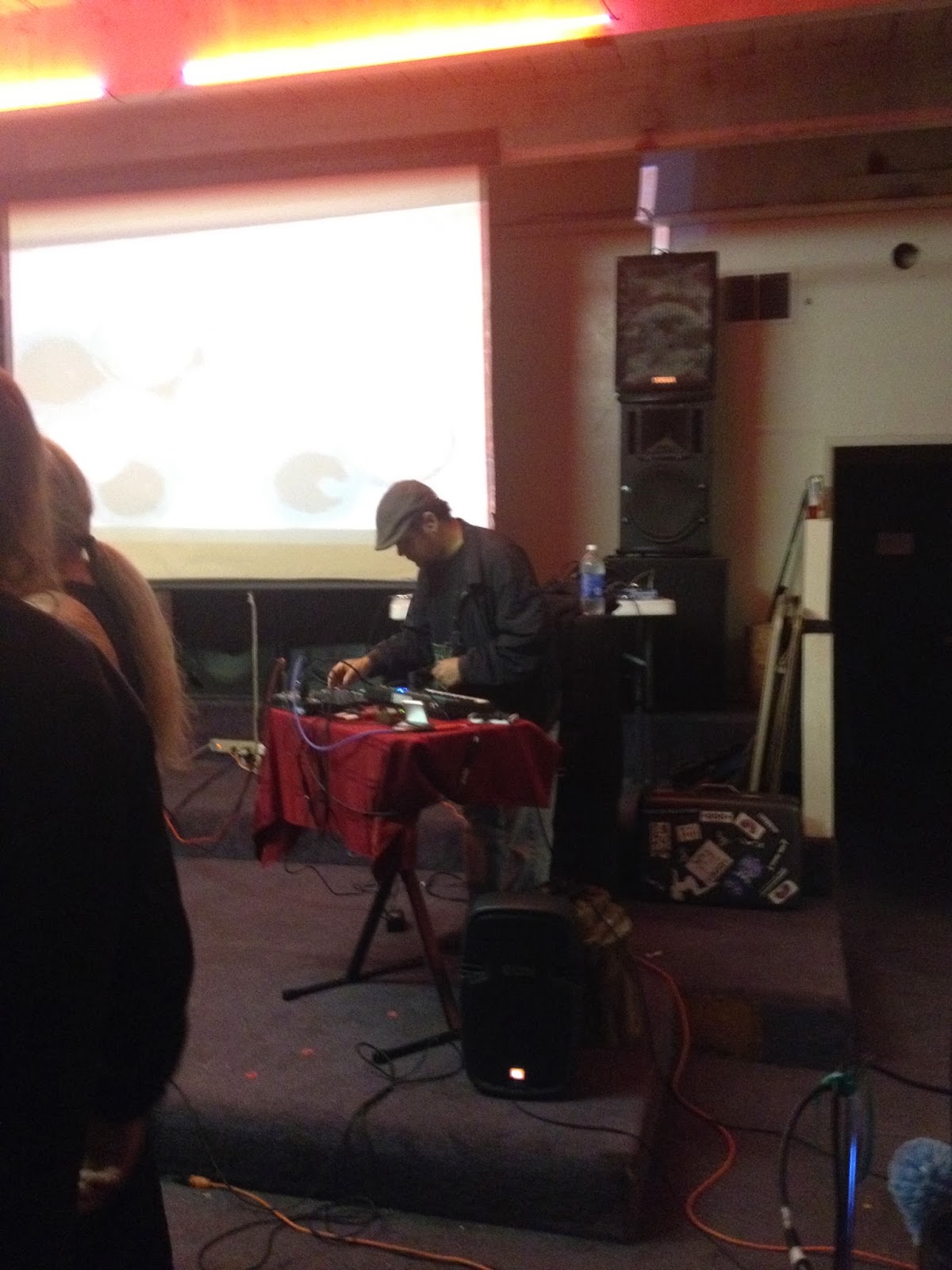 Below: me and a cool Life Changing Ministry t-shirt, yeah, I bought one! 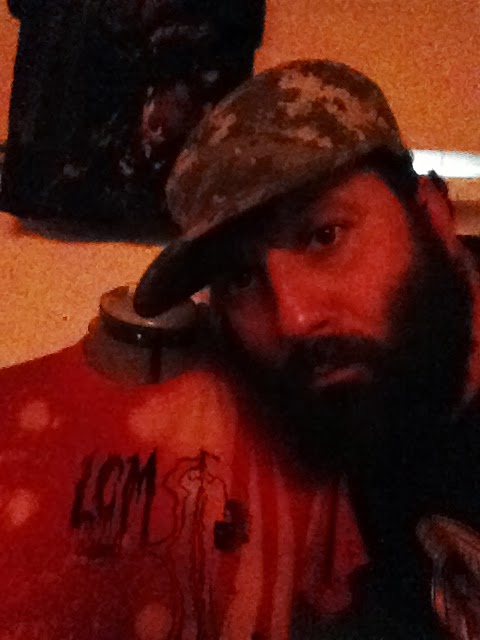 Below: video, courtesy of roseman127! Thanks!

Posted by Mark Pino On Drums at 5:19 PM No comments: 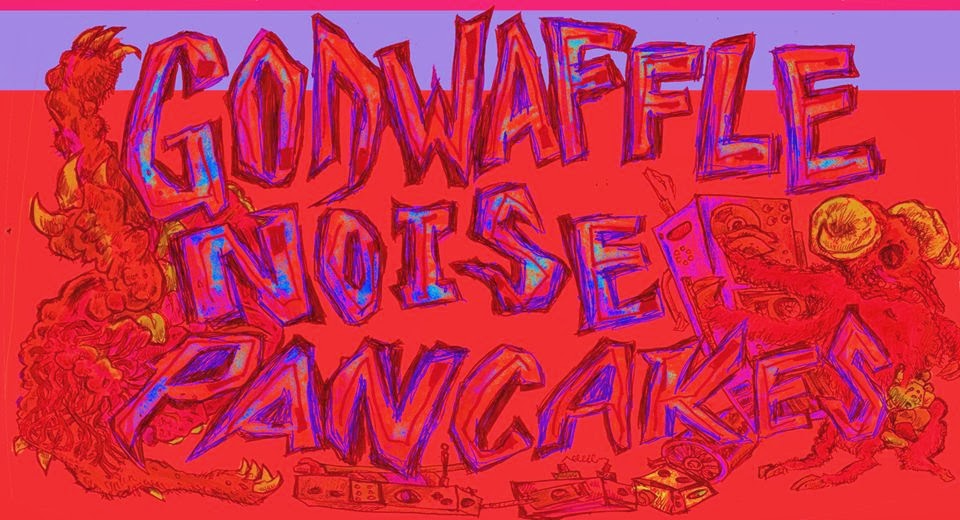 I'm looking forward to playing again with Earspray, this Sunday, 1/26! The show will be a Godwaffle Noise Pancakes event at Life Changing Ministry in Oakland.
The show starts promptly at noon, and LCM is located on 8th St. at Harrison in West Oakland.
Also on the bill will be Liver Cancer, DemonSleeper, Slusser, and Together!
We've been practicing, and I'll be sticking to the Nunn Plate exclusively for this one. See you there!
Posted by Mark Pino On Drums at 8:27 AM No comments: 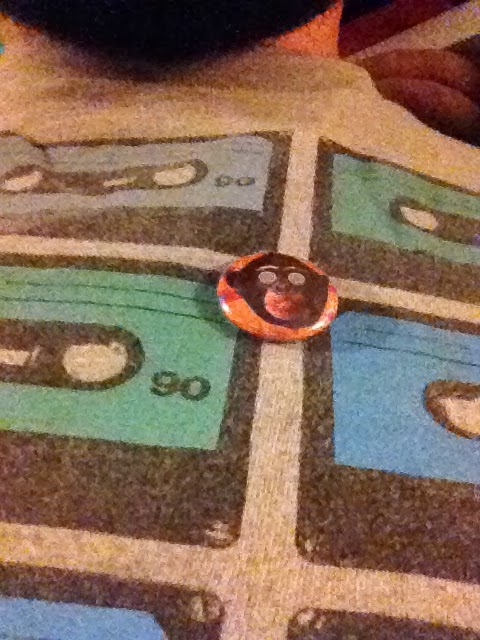 It was great fun to be involved in UB Radio Salon's 314th broadcast! Das informed that he and Ninah have never missed a Sunday since the Salon's inception!
I played a stripped down, somewhat lateral version of the Cloud Kit, augmented by Das's WALL of gongs. That was fine.
It being the birthday of Edgar Allen Poe, I read works by him, along with Michel Foucault (on madness) and Nick Blinko (on Poe).
Sheila also had a birthday yesterday, so we ate cheesecake during the break in celebration. 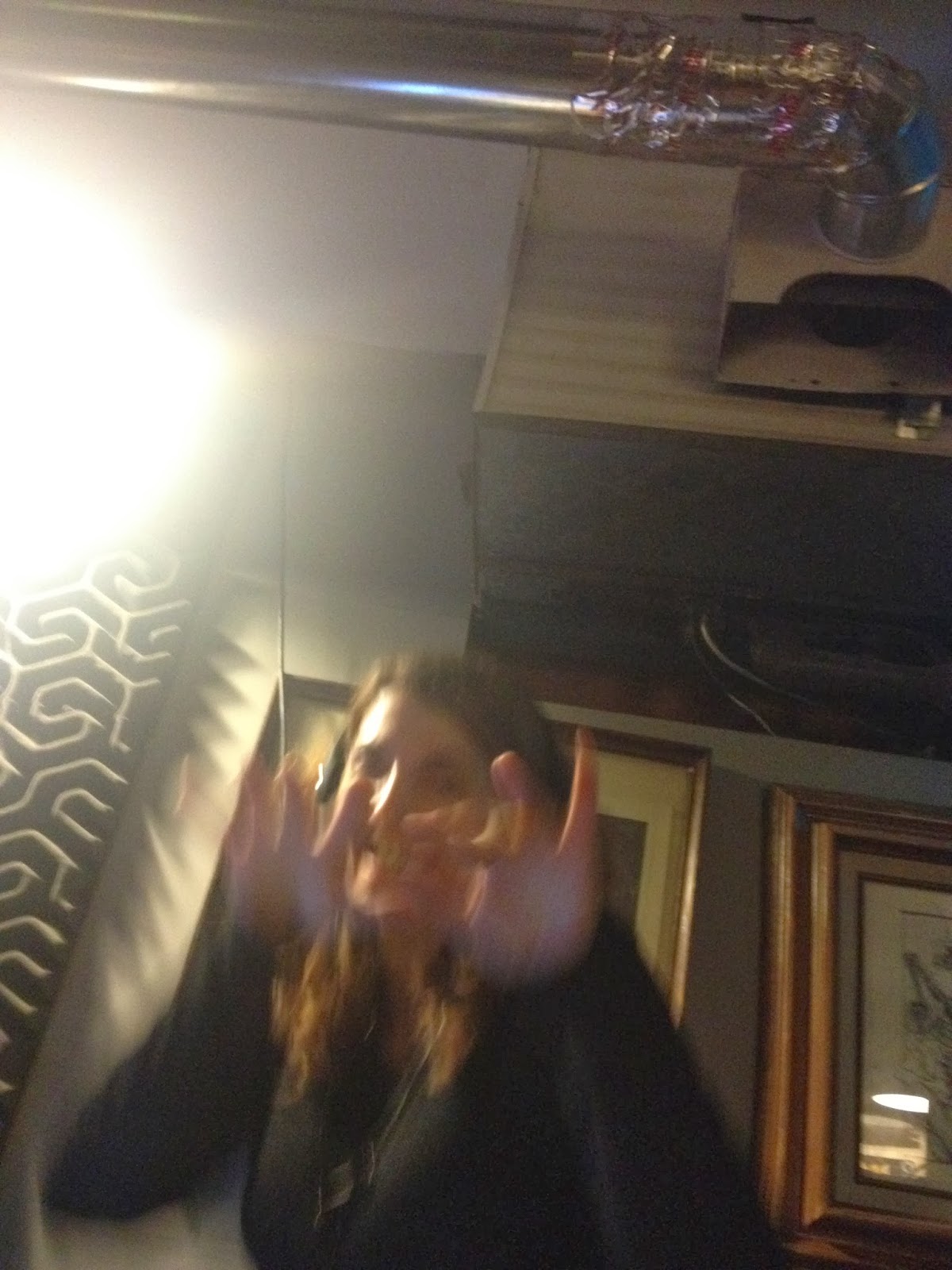 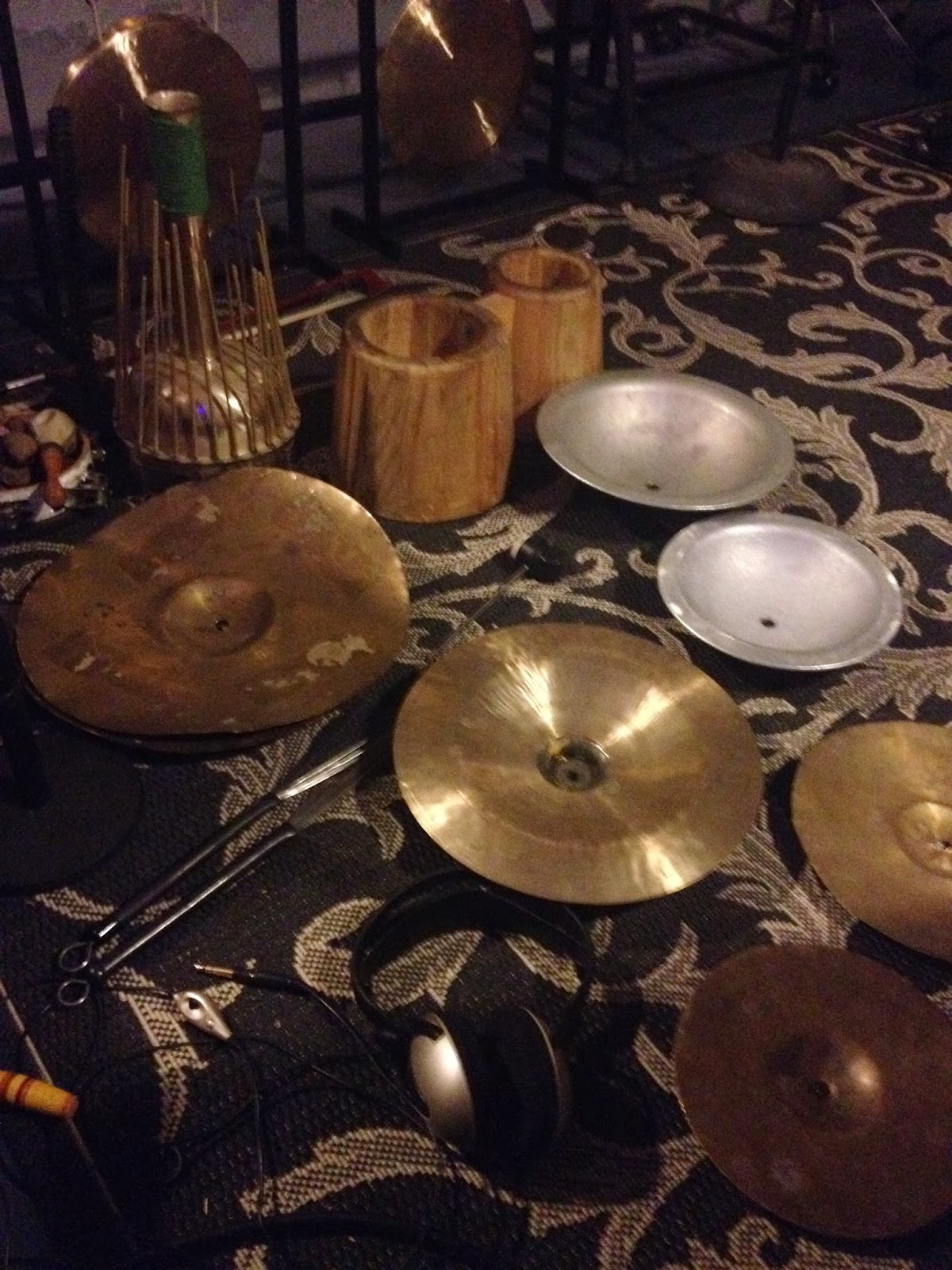 The music went well, especially the first set, which went to some really nice, broad passages, ending in a group chant of "The Conqueror Worm". Cool stuff!

Below: My Happy Place 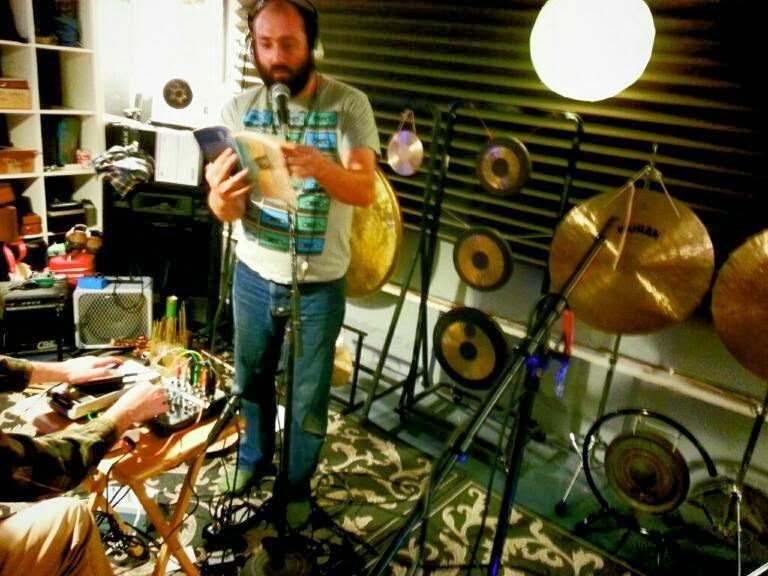 I was a bit bummed during the second set, as I misread a piece of the Raven. Drats!
All in all, a great, tripped out time! 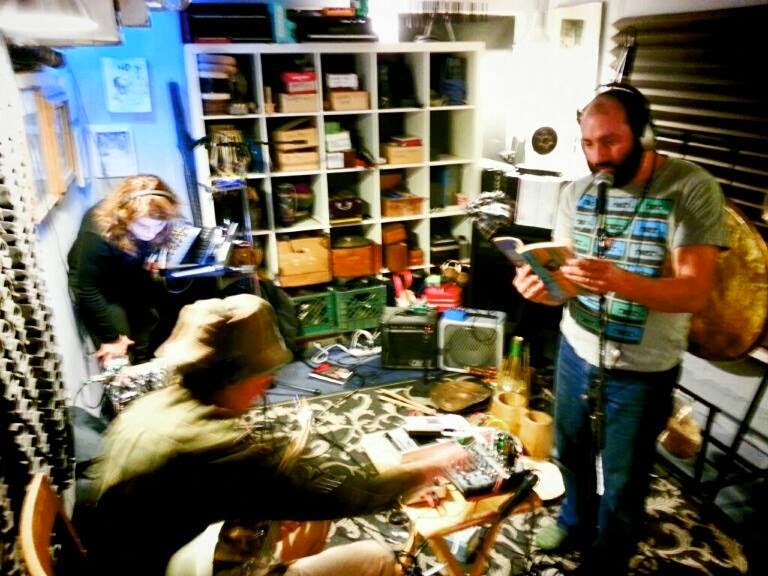 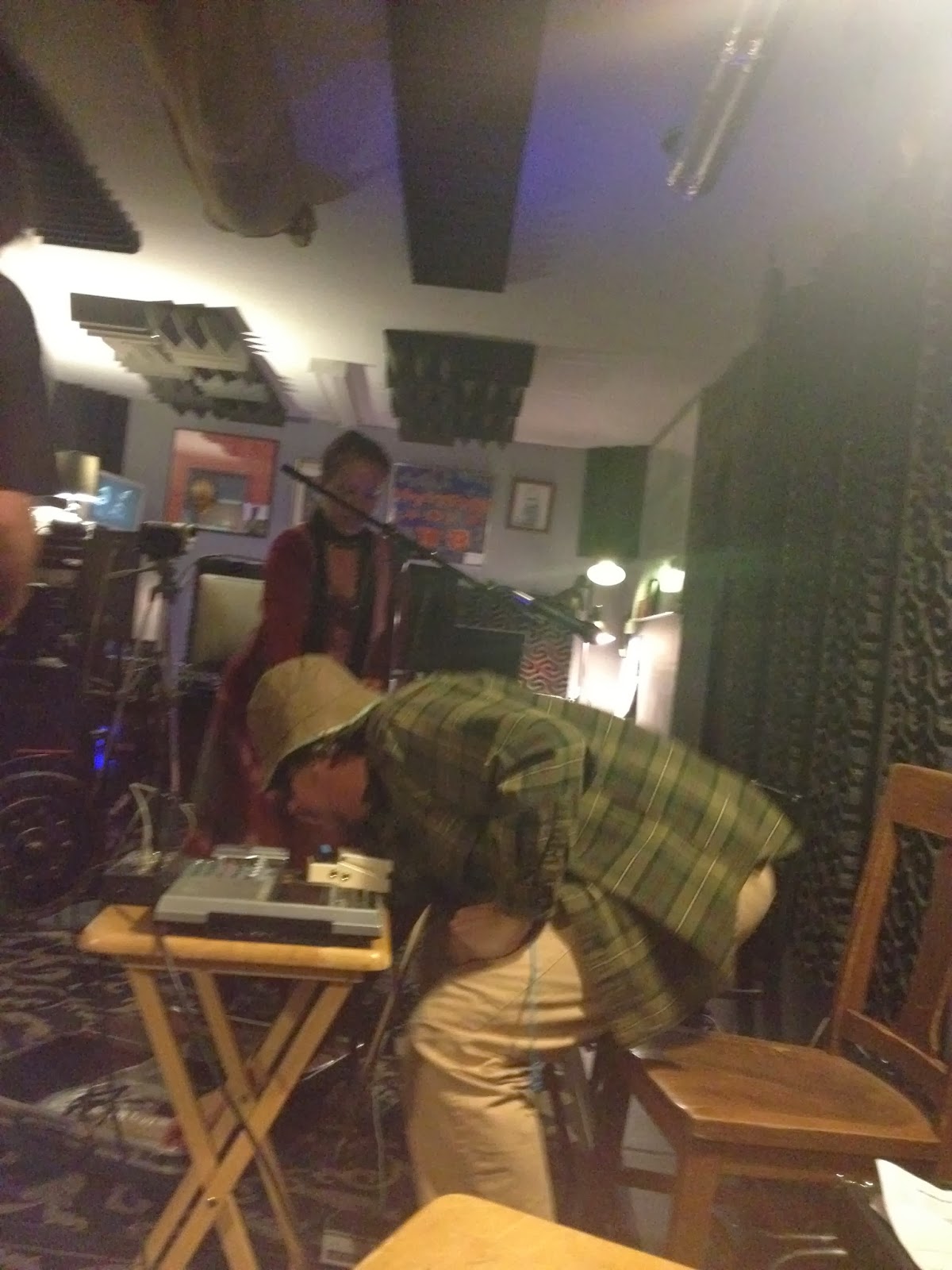 Posted by Mark Pino On Drums at 8:20 AM No comments: 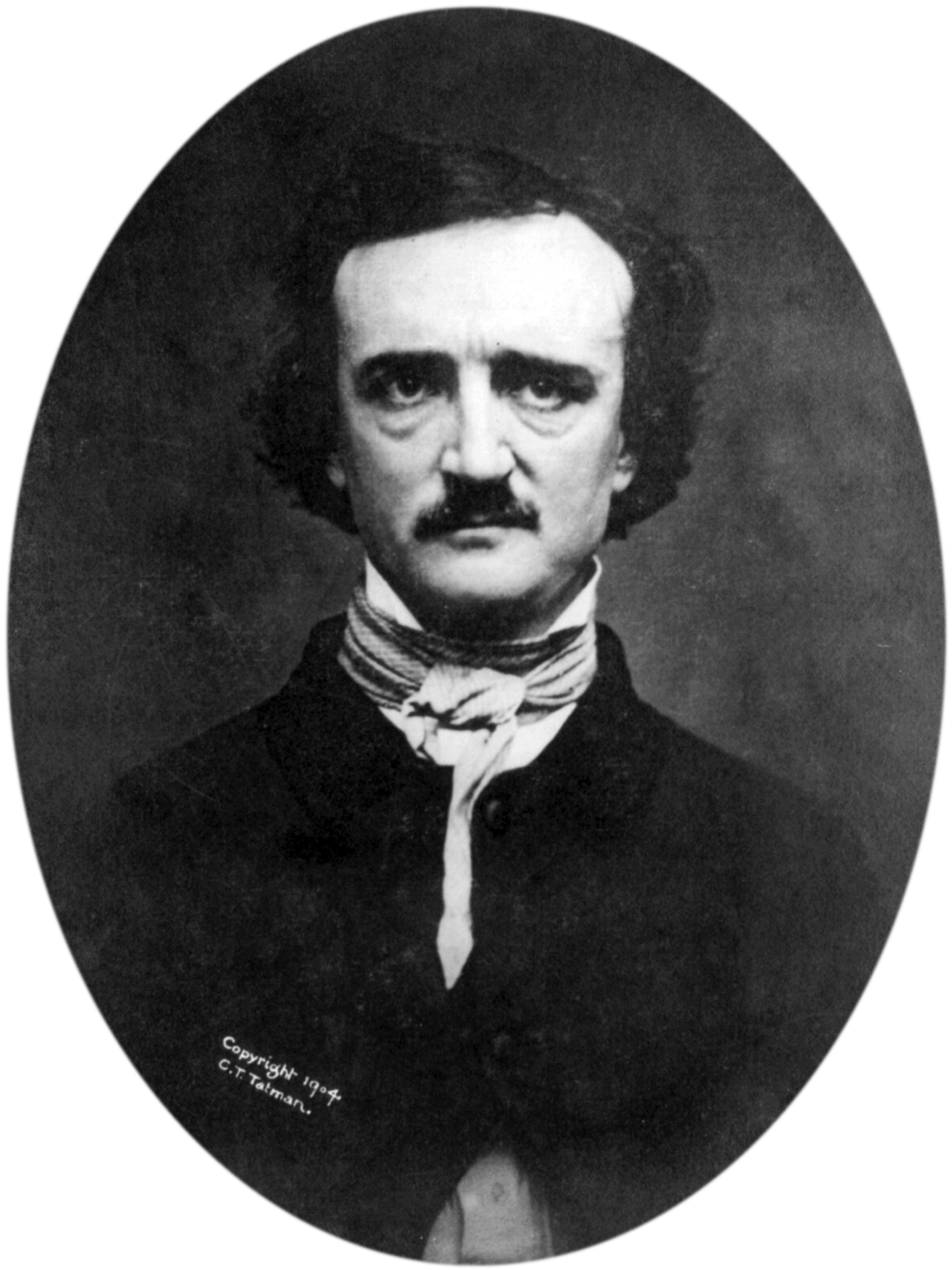 See you on the interwebs!
Posted by Mark Pino On Drums at 2:48 PM No comments:

This footage, shot by White Light Prism, was filmed at Harmonia in Sausalito, CA 12/6/2013. 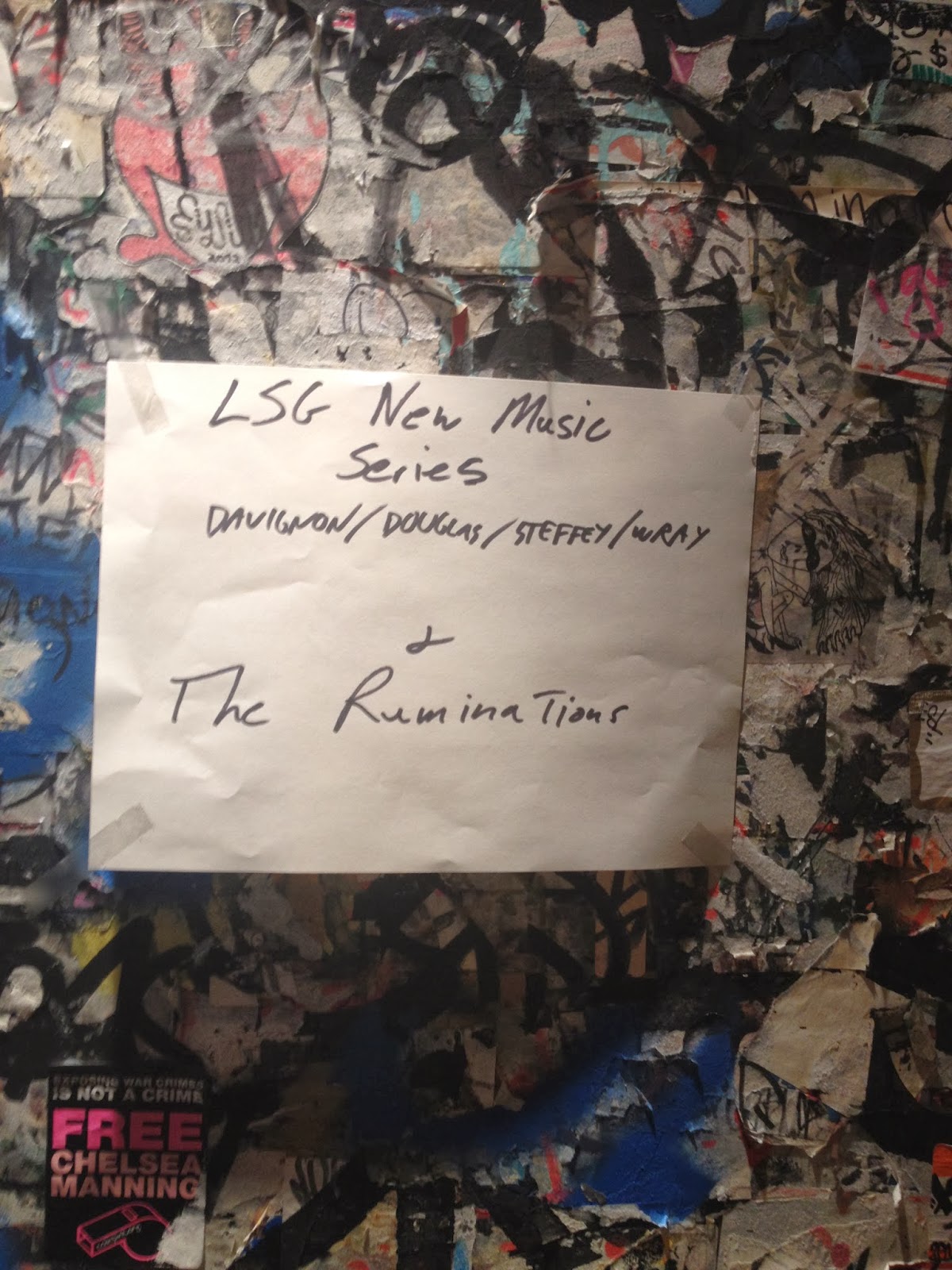 Last night I was very excited to get back to the Luggage Store for the debut of Ruminations, a recent brainstorm of Rent Romus.
Matt Davignon's quartet, featuring Anna Wray, Daniel Steffey, and David Douglas started off the night with their great electronics/percussion alchemy. They played well spaced and well paced, taking me into strange mental regions. Their last piece was particularly cool, having a quality of a street festival percussive march! 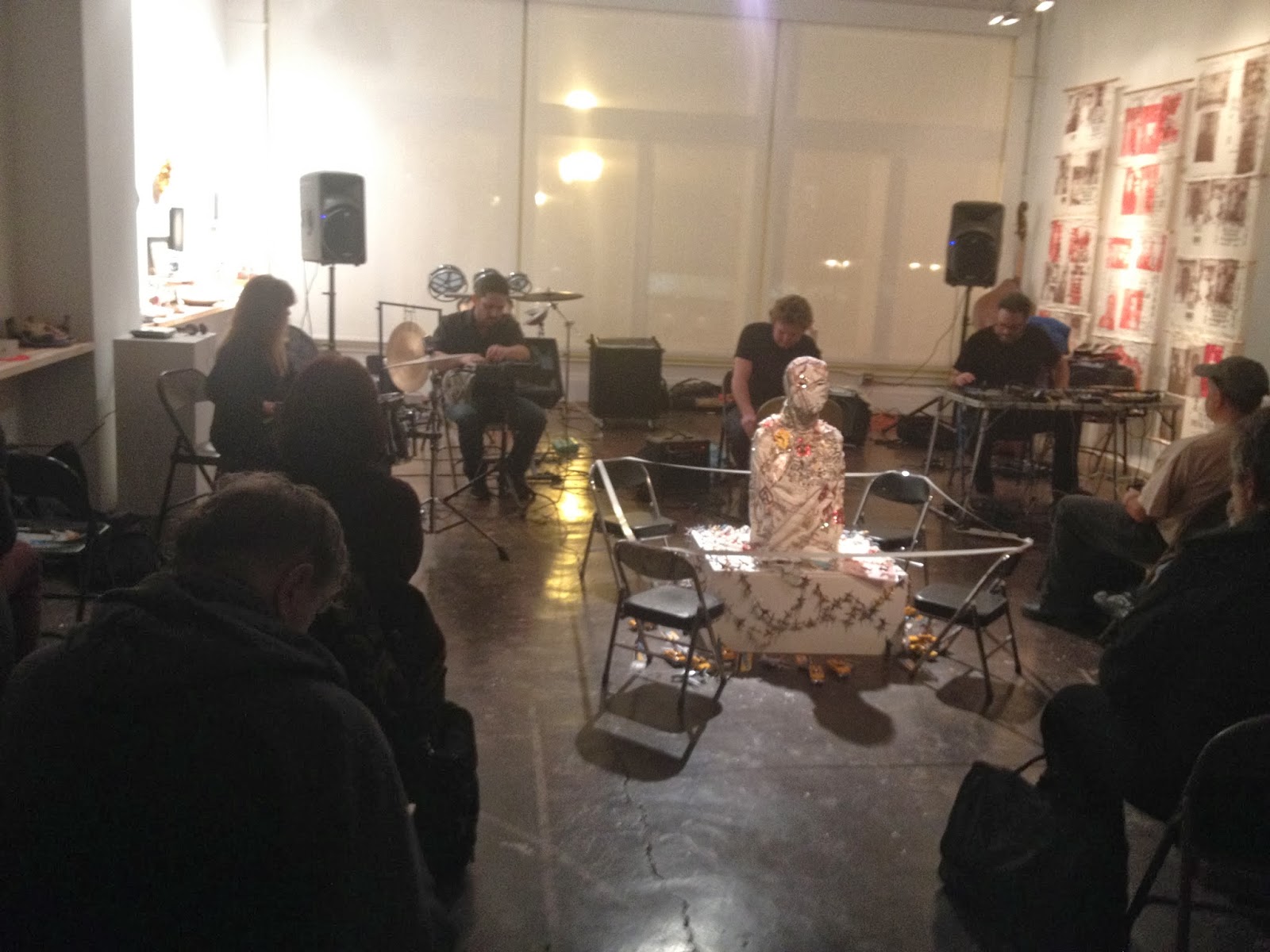 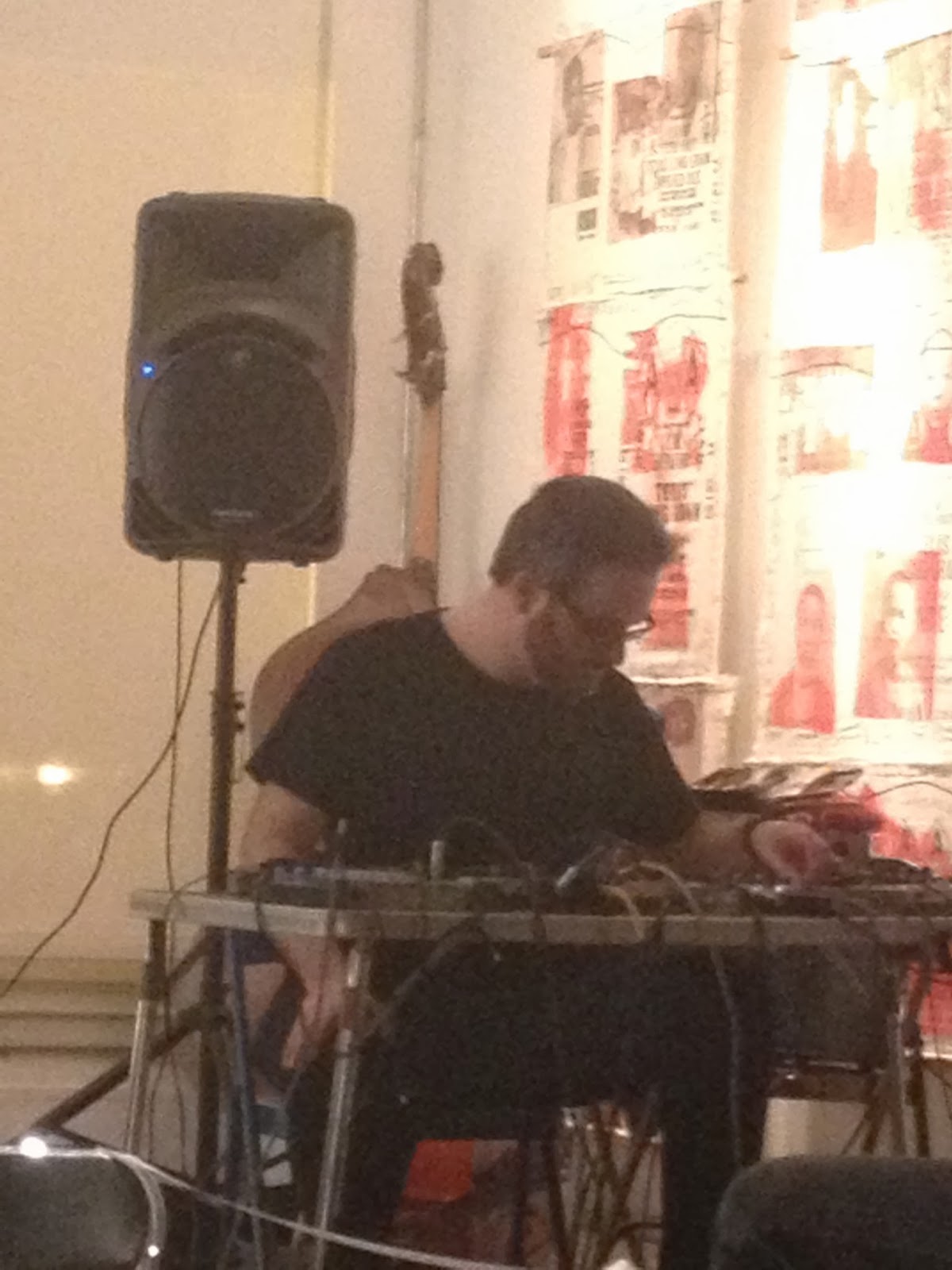 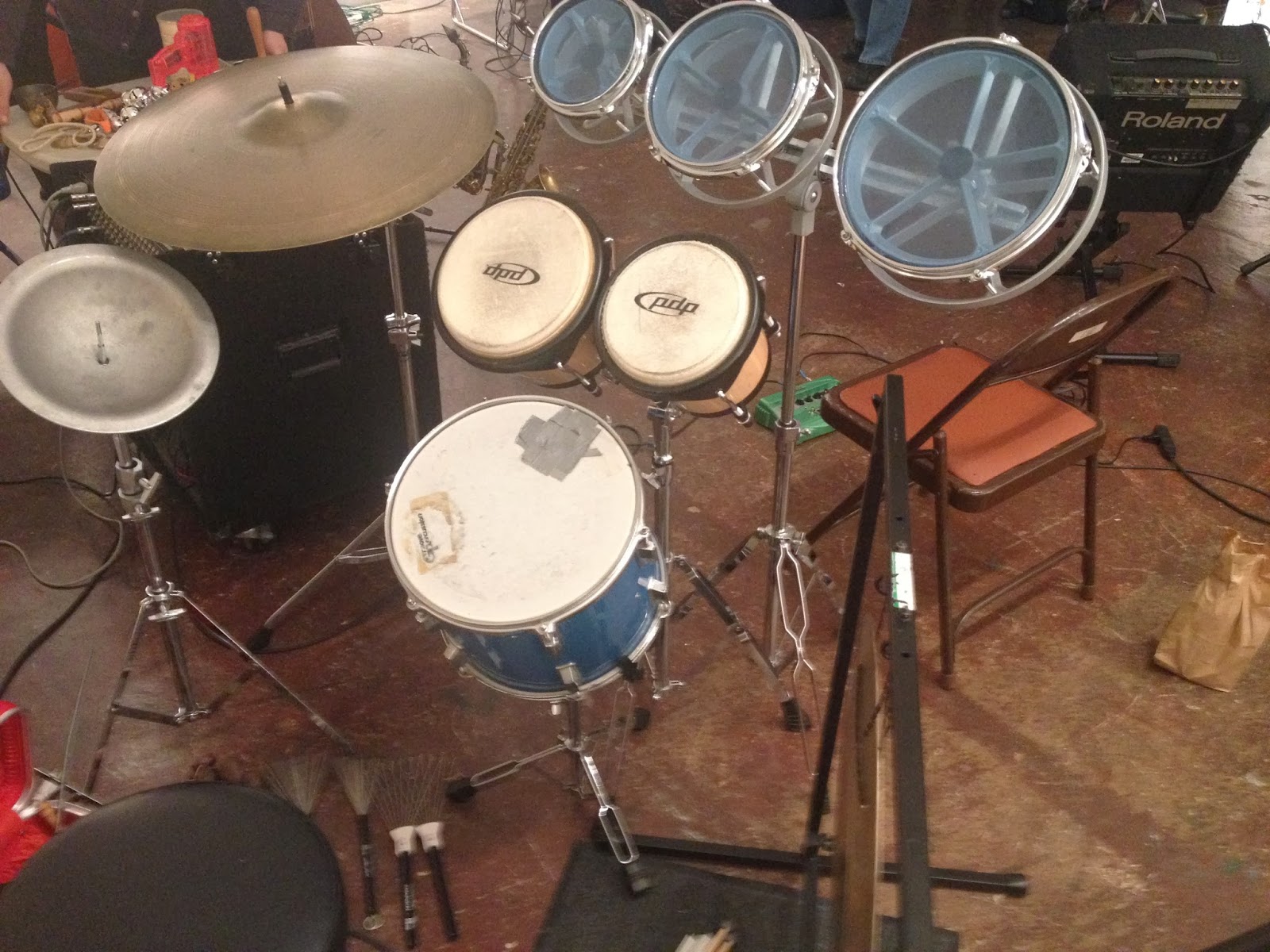 After the briefest of pauses, Ruminations began our set. The lineup featured Rent on winds, Markus Hunt on bass, Christina Stanley on violin, Bob Marsh on cello, and myself on percussion. I was stoked to be playing with such great players, and I feel like things gelled pretty nicely. Rent's main qualifier to us in rehearsal was "I like endings, let's make sure to have them as part of our improvisations", and I felt that we stuck to that parameter, along with playing pretty interactively. The piece Burn It Down, one minute of blasting as intensely as possible, left me breathless! All told, I'd say that we played about seven pieces total.

Below: Ruminations photos by Matt Davignon and CJ Borosque. Thanks! 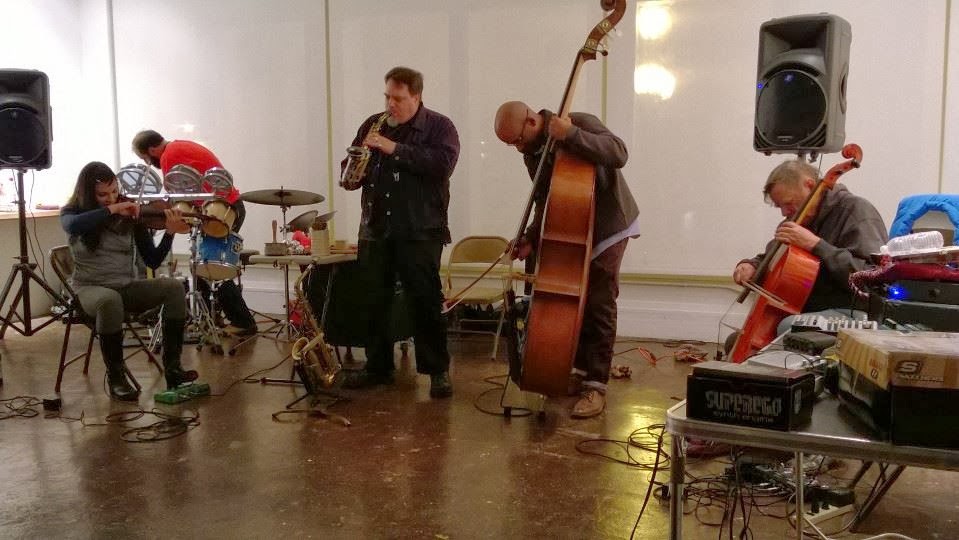 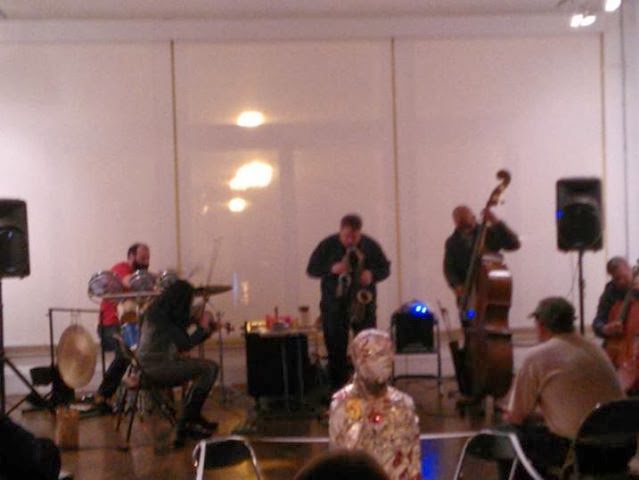 I sit here a few hours later, savoring the memory of such a fun gig. What a great way to start the New Year!
Posted by Mark Pino On Drums at 5:59 AM No comments: