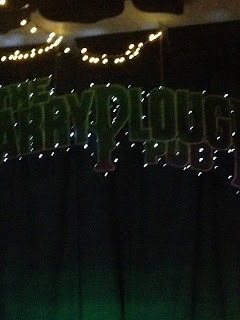 Not a ton of pics taken by me last night. I was sick with a cold, and felt just barely there.
It took a bit of time for Surplus 1980 to get our engine going, as Steve was using a borrowed bass rig; that, and a lack of sound check. Still, I felt like we managed to get to a nice, rockin' energy after a song or two. As mentioned in the preview for this show, it had been a long time since I stood on the Starry Plough's stage. I'd forgotten how spongy it is! A real pub feel!
Highs from our set for me were a swift 99 Is Not 100 and a chunky Ed Saad. A couple of biffs here and there, but, all told, not a bad set, especially since I felt sick as a dog! 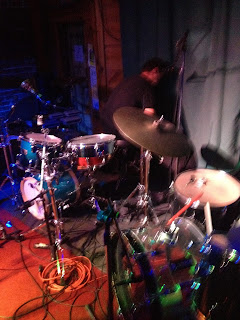 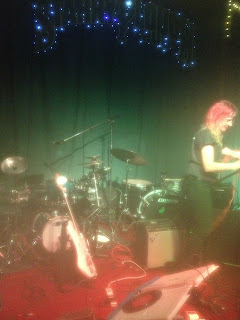 Thanks to Qualia and Oceanography for getting us on this bill. Next Surplus 1980 show in June!

Surplus 1980 will play this Saturday at the Starry Plough! 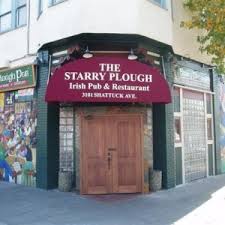 Totally short notice here, but Surplus 1980 will play this Saturday in Berkeley! Details

Also on the bill will be Oceanography and Qualia.
I haven't played the Plough since 2006 or so, and I'm stoked to get a chance to play there in 2016.
If you're in the area and want to rock, please consider attending!

Posted by Mark Pino On Drums at 5:10 PM No comments: 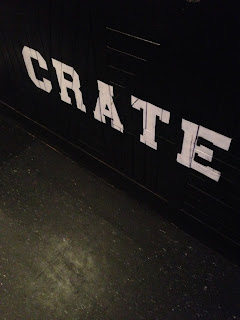 This show was bittersweet for me. Sweet, in that I felt like it was the tightest set that I've yet played with Surplus 1980. None of the discrete mistakes that occurred during our Hemlock Tavern show popped up, and it just felt rock-ingly crazy and powerful. I was able to hit some of the more subtle dynamics in the tunes, which are very important to Surplus guitarist Bill Wolter; I definitely see the band as being a loud Rock band, but have come to see the logic in Bill's conception of shaping sound and dynamics. Anyway, I felt like we achieved a good balance of the two last night. Bitter, in that we only played four songs! A five-band bill on a Monday night necessitated the brevity, so I totally understand and agree with it, but, damn I wanted to keep going! Oh, well, hopefully our next show will allow at least forty five minutes or so! 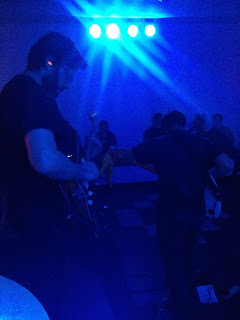 Posted by Mark Pino On Drums at 4:21 PM No comments: 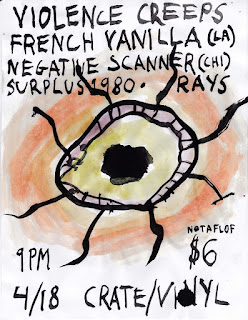 Also on the bill will be Violence Creeps, French Vanilla, Negative Scanner, and Rays. If you're in Oakland on Monday night, please stop by!

Posted by Mark Pino On Drums at 7:26 PM No comments: 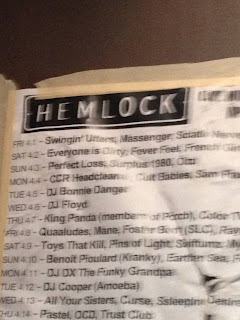 Usually, a booked show for a Sunday evening is an invitation for disaster; what workin' folks are going to be at a club at 11PM on a Sunday night, waiting for a band to play? Thankfully, the organizers of this show were smart and scheduled it as an early starter. The first band, Otzi, played at 7PM sharp.
Surplus 1980 were last on the bill, but we were able to hit at about 9. Owing to the sensible start time, we actually had some enthusiastic audience members in attendance.  We seemed to play to these folks, too. The energy was high, Moe! was ON (the man has fans!) as he danced into the crowd and banged on any available surface, including guitars. Everyone seemed focused and ready to play. Melne fought off her recently acquired cold, Bill was his usual enthusiastic self, and Steve, having literally shown up right at our start time, was seriously on task. I felt pumped up, too, having been pretty inspired by Perfect Loss and Otzi.
It's funny: I've now played Ornette Coleman's "Theme For A Symphony" twice at Hemlock Tavern! Along with last night's Surplus rendition, Barney Cauldron played it when we opened for Greg Ginn and the Taylor Texas Corrugators in 2009.
A few clams were made: I biffed a transition on "99 Is Not 100" and cut off a verse on "Failure of Commitment". Sorry, folks. That said, the new tunes are getting really solid, and the overall energy seemed fantastic and powerful.
A totally sweet gig, all the more so for its thoughtful planning. I know, how Rock 'n Roll, right? 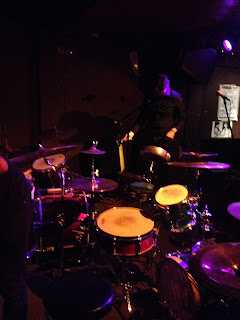 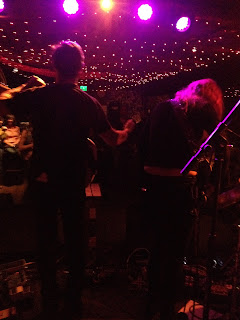 Above: Moe! admonishes the crowd that our bass player is on his way!
Below: Surplus 1980 (minus Steve Lew, out of frame) live, photo by Matt Herman, thanks, Matt! 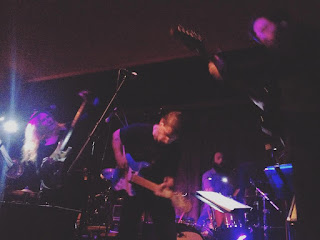 At the end of the night I received a compliment from ace drummer Jordan Glenn, which was very sweet icing on the cake, indeed. Thanks, Jordan. Also, big ups to Perfect Loss drummer Karl for sharing his kit with me. Thanks, Karl.

Posted by Mark Pino On Drums at 6:01 PM No comments: