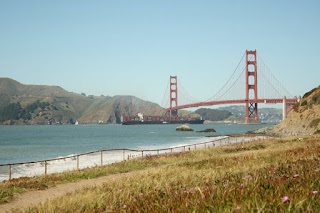 First up:
Saturday, 10/1, ebolabuddha will be playing at the all-day Gennie Jamz V event.
This event seems like a pretty loose affair, but Eli tells me that it's lots of fun, and basically occurs underneath the Golden Gate Bridge. Details: 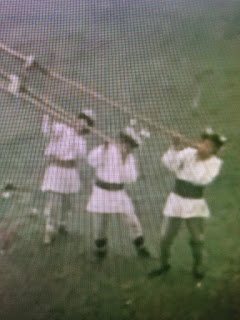 Next, on Sunday 10/2, Failure Cock will be playing Norcal Noisefest XX! We're rehearsed and ready, as far as I can tell. This show is jam packed with Noise/Harsh Noise/Experimental music, and is highly recommended!

Perhaps I'll see a few pals at one of these shows! It's going to be a ruckus weekend....... 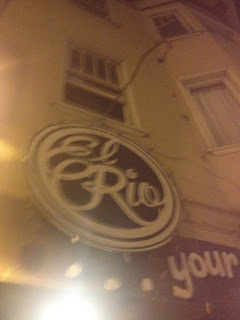 After seeing the bustling nightlife on display at El Rio, I can say with certainty that San Francisco is most definitely not losing ALL of its youthful exuberance. Tons of young people were enjoying this venerable joint's cool patio and funky interior.
I can also say with certainty that the live music portion of their evening was largely unimportant to them: most stayed away from the stage area. Having stayed and participated in that movement, I know that I had a fun time.
Watching and listening to Smokers with their tight two guitar Punk Rock and Apogee Sound Club's cool weird and funky Punk was awesome.
As for Surplus 1980, I felt like the set was pretty darn good. The arc of the set order had a really good feel to me: starting with a somewhat challenging number (Morale Is High, an old Mute Socialite tune), then proceeding to the more upbeat stuff and ending on a slamming note with the fast ending of A Motivated Song About Procrastination was nice. It felt really nicely ordered. After lengthy conversations about sound separation and dynamics, I chose to play most of the set with a pair of those weird rod drum sticks. Actually found a pair that feature somewhat thicker rods; I seriously hope that I didn't sound like a Jam Band drummer, as that is absolutely NOT what Surplus 1980 needs. A conversation with a guy out front of El Rio at the end of the night confirmed that, at least as regards the separation, that was good tactic. He mentioned that he was able to hear the somewhat intricate guitar interplay. Victory there, for sure.
This being a 2016 Surplus set, I did make a pretty large gaff on Failure of Commitment. I'm not sure WTF is going on with me and that one, but I am starting to feel like the Peanuts character that's always lifting the football before Charlie gets his kick in. Sorry Moe!
All in all, a fun, rockin' evening in the Mission. I'm glad to see that that sort of thing is possible.

Below: drums, lights,  guitars, and guitarists 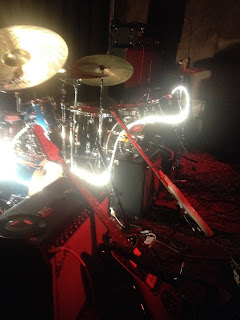 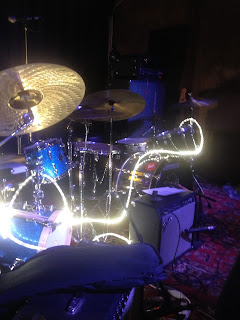 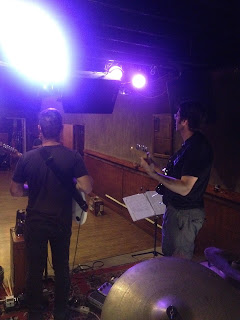 Posted by Mark Pino On Drums at 4:00 PM No comments: 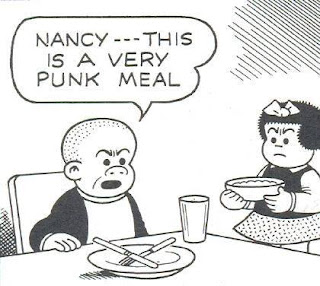 SF pals, come on out! 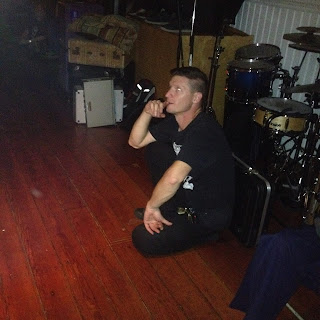 This one was the show the would not die. Originally scheduled for the Night Light, it was cancelled there due to an opportunity for that establishment to make some good money on a Pop Punk festival. Polly from Reconnaissance Fly managed to have the bill with them and Surplus 1980 moved to Oakland.Secret. We had already written it off, but happily agreed to have the show at the new location.
Reconnaissance Fly and the Clifford/Pasucci Duo were really good, cool sounds to start the evening off. Surplus 1980 took the closing spot. It took a while to get set up on the tiny stage of Oakland.Secret, and I fear that some nerves were a bit frazzled. We played an energetic set. There were mistakes and gaffs: at one point, Moe! declared it "Surplus 1980 On An Off Night"! Oh man. I have to cop to some clams, and was kinda bummed. I mean, I practiced a lot for this one! In one week, I'll have a chance to redeem. Good lord, please let that be the case.
Still, a version of Pigeon Obstacle Course was dead on, as was our take on Dancing In Your Head (Theme From A Symphony) by Ornette Coleman. Another raucous Surplus set, I guess.
It was a real pleasure to play Larry the O's beautiful Yamaha drums as a back line. Many thanks, Larry!
A fun, albeit flawed set. Argh!

Below: drums and head stocks 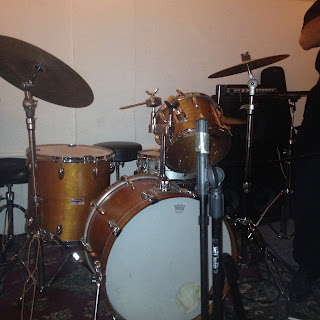 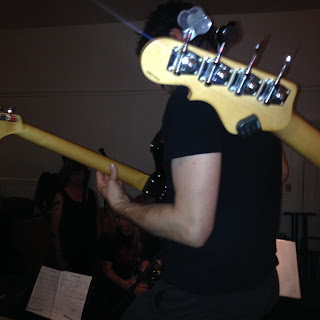 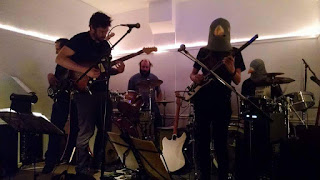 Above: Surplus 1980 starts off the set (photo courtesy of Polly Moller, thanks Polly!)

Posted by Mark Pino On Drums at 3:36 PM No comments:

It's to Outsound's credit that the major celebration for Vinny Golia's 70th birthday went so smoothly. It is also to Mr. Golia's credit that so many people would give up their Saturday afternoon and night to play. For me, it was pretty humbling to share the space with so many SF Bay Area improvisers. I saw friends, acquaintances and unfamiliar faces within the 70 piece ensemble that Rent Romus managed to gather for the show.
The rehearsal, starting at about 4PM, seemed to go really well. A humorous moment occurred when one player said that "no" to a solo cue from Vinny, to which our leader replied "...NO is NOT why you're here!" Well....yeah!
As for the performance, it seemed to start off pretty well, with some tightly played transitions and full/partial ensemble passages. Things seemed to get a bit muddy at certain points, and I sensed that Vinny may have been a bit frustrated with an emerging lack of dynamics: he appeared to be trying to cue certain sections to pay a bit more attention. What a tough task!
Despite that action, there were several cool spots during which duos and trios were able to interact, improvising off of pages from the full 26 page piece that had been written and sent to everyone (WOW!), while the rest of the group colored and supported.
At the end of the continuous two hour set, I was drained and incredibly thirsty. Everyone seemed happy and fulfilled. Hopefully this was especially the case for Vinny Golia. 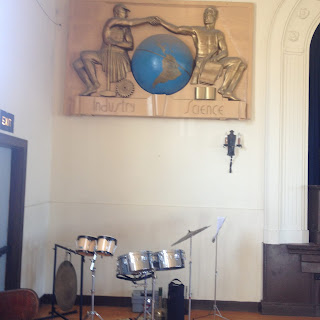 Above: my percussion rig, underneath my favorite frieze in the Bay
Below: the rehearsal: Vinny gives instruction 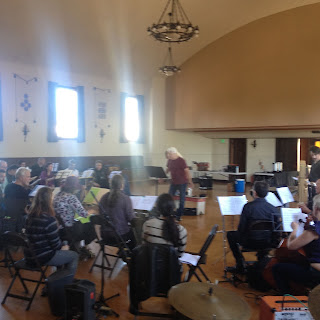 Below: the show starts 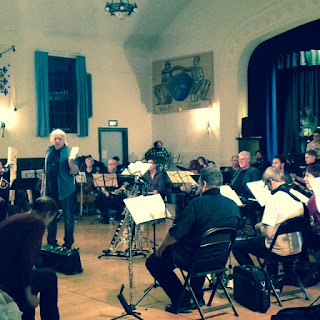 All told, it was a fun evening. Hopefully some type of recording of it emerges. 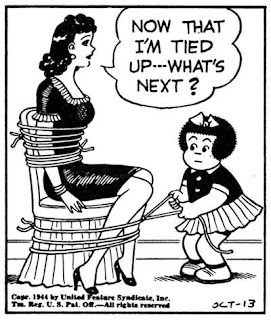 After a somewhat slow late summer for me musically, I'm happy to say that this weekend will be really busy.

First up, Vinny Golia 70+ Large Ensemble will be playing. I was invited to play drums, and decided to play stand-up percussion, much in the same way that I did in Rent Romus's Large Life's Blood Ensemble for the Otherworld performances of 2014-15. I suspect that this one's going to be pretty great!
Details here:
Sat., 9/17/16
Finnish Kaleva Hall
1970 Chestnut St.
Berkeley CA 94702
8-10 PM
$15

I know that there will be plenty of fun had at both of these gigs. Stoked!
Posted by Mark Pino On Drums at 3:33 PM No comments: 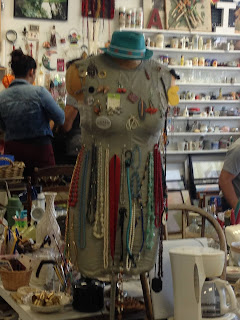 Crow Crash Radio seemed to have had a collectively fun time playing at Free Oakland UP! today. We have played there a bunch of times now, and we always enjoy Jocelyn's fun, funky, free stuff space. I really wish that we had recorded most of our two sets, as we stretched out into some really focused, psychedelic versions of a handful of our tunes. Brian was really enjoying this new pedal that he got, and I, having recently been reading about the Yardbirds in Ugly Things Magazine, was obsessing over the Rave Up. I played accordingly, trying to push and pull the forms that we were dealing with. It seemed as though this generally worked: again, I'm sad that we didn't record.
I also had a really good time watching people come and go. These kinds of gigs are really good for people watching. You're right there as people walk past. Smiling children, sullen teens, puzzled older folks; they all come in and look around at the myriad stuff within Free Oakland UP!'s confines.
Hella good times in East Oakland!

Below:
Brian and drums 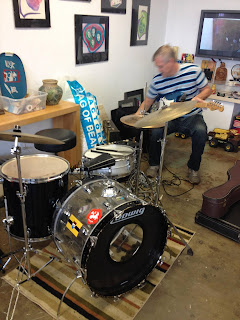 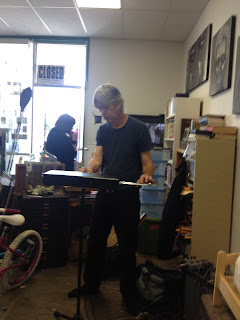 Above: Andrew getting ready to explain his theremin.....again.......

Posted by Mark Pino On Drums at 6:54 PM No comments:

Crow Crash Radio at Free Oakland UP! this Sunday! 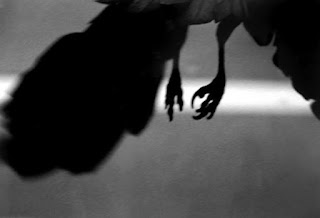 East Bay pals, come on over!

Posted by Mark Pino On Drums at 9:46 AM No comments: