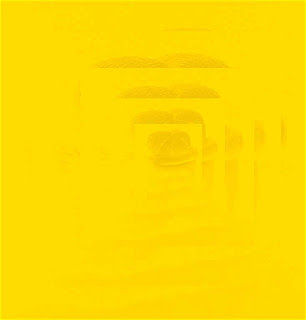 OK, off to rehearsal now! 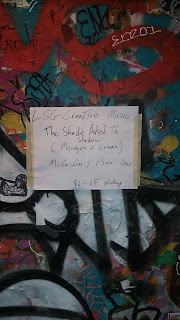 On account of a wicked cold that's currently attacking my immune system, it was pretty tough to schlep over the bridge to SF for last night's Luggage Store Gallery show, the debut of CJ McCaslin and my duo. However, after a really inspiring set from the Shade Asked the Shadow, I most definitely felt up to playing.
It seemed as though we did indeed get our play on, too. Although the set felt a bit short to me at 27 minutes or so, we got into some pretty cool soprano sax/drum set Free Jazz call and response action, with some pretty ripped arpeggio from CJ. It felt like I was able to keep pace with her fast pacing during that action, and managed to get some looser, more Bluesy licks in during the sax's quieter moments. These sax/drums duets were accompanied by two all-percussion pieces, which, to me, had the sound of John Cage's percussion stuff. Hopefully they approximated that complexity, too. I actually, off the cuff, dedicated the first one to Mr. Cage.
It was cool to play to a supportive, albeit small-ish, audience within the intimate space of the Luggage Store Gallery. As always, thanks to Outsound for getting us on to one of their bills.

Below: CJ sets up, drums, and another "moody" 6th @ Market shot 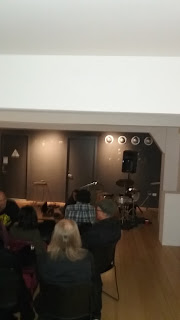 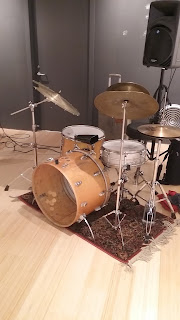 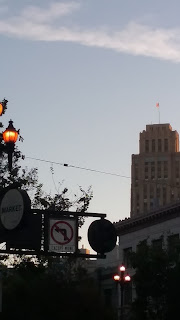 Posted by Mark Pino On Drums at 5:05 PM No comments:

I am happier with this piece than I was with the last one, at least as far as my playing goes.
CDP plays next Monday at Make Out Room, SF!
Posted by Mark Pino On Drums at 7:08 AM No comments: 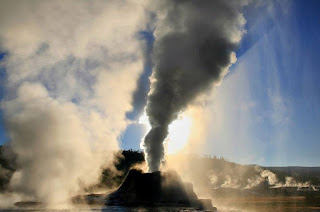 I'm looking forward to this duo exchange!
Posted by Mark Pino On Drums at 6:05 AM No comments:

Pure Finder vs. Skull Krusher live at Luggage Store Gallery 3/16/17 up at Archive.org

Infinite Plastic Internal live at the Stork Club 10/18/2014 up at Archive.org


My vocals on a cover of Nico's Julius Caesar (Memento Hodie) are not the greatest, but that's OK I guess. My last show with Jim Ryan before he left the Bay for D.C. He is missed.
Posted by Mark Pino On Drums at 9:04 AM No comments: 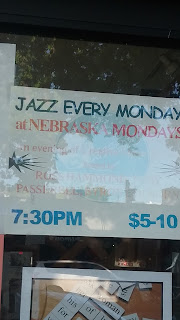 After a breezy, sun dappled ride up to Luna's Cafe in Sacramento on I-80 East I was in a fine mood. This part of California is so electrically green right now! Gotta love that. It was also cool to see the snow capped mountains in the eastern distance and that Nut Tree Plaza is making a real comeback. Man, how I love this place.
I'd been looking forward to Cartoon Justice's set at the venerable Nebraska Mondays for a while. Mika, Kersti, Eli, and myself all manged to get there in time for a quick set up and a timely start. Our set consisted of four pieces, two of which we'd rehearsed: these were grooved, pattern based songs, inspired by Ornette's Harmelodics and Miles's Free Funk. I felt pretty comfortable on them, rockin' out at times but trying to mesh energy with dynamics. I guess that Mika's guitar got a bit overpowered, so maybe I still need to work on that. We did one shorter improvisation where I stuck to brushes and a mostly Blues feel; at times I felt lost, but Eli guided me back with his bass tones. We finished with a longer improv that featured the multi-talented Tony Passarell on some great soprano sax flights that intertwined with Kersti's alto in neat ways. It seemed as though Cartoon Justice got to our ideal sound, one that I've termed Shamanic Jazz. Sadly, no one recorded, so those now belong exclusively to the Akashic Record. 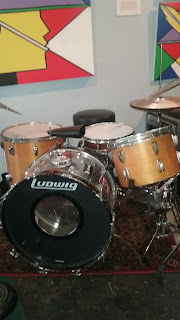 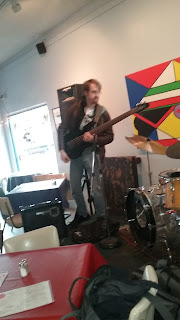 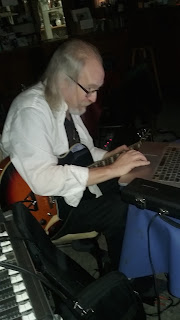 A few days back, Tony Passarell contacted me and asked if I'd be up for subbing for 4th World's drummer Martin Birke. Obviously, I took him up on the offer. It was great fun to try to fit in with this cool group's Ambient-flavored Improvised Music. I enjoyed locking in with bassist Paul Relvas as he got to know a really nice new fret-less bass. Also cool was guitarist Stephen Sullivan's textural playing. At times we achieved what I felt were some rad ECM-type sounds. Once, I looked over at Stephen's pedal board and it was at a setting called "Scuba Diver"! I found that funny! Diver down!!!
Along top of this rhythm section, Tony played cornet, soprano, percussion, and generally lead the band into various sound zones. Tony's talents are endless, and it was a real pleasure to share a stage with him.
All told, a fun night of musical activity in the always chill Luna's Cafe. Many thanks to those that stuck around and listened.

Below: live shots by Russ Tucker. Thanks, Russ! 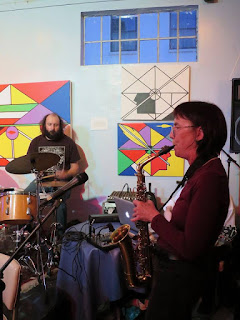 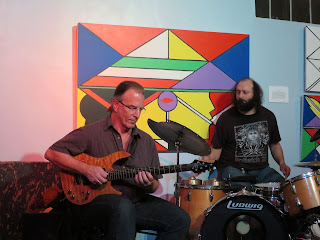 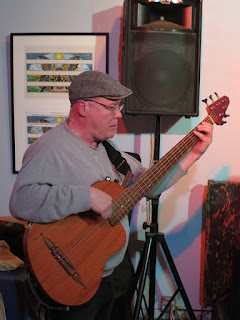 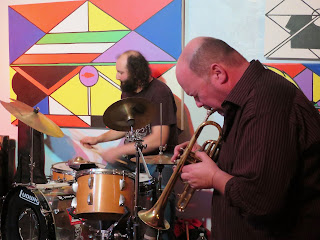 Barney Cauldron live at 154 Gallery SF CA up at Archive.org


The crazy homeless guy that helped us out on a version of The Shah Sleeps In Lee Harvey's Grave: priceless.
Posted by Mark Pino On Drums at 1:31 PM No comments:

Ovipositor live at 23 Club in Brisbane CA up at Archive.org 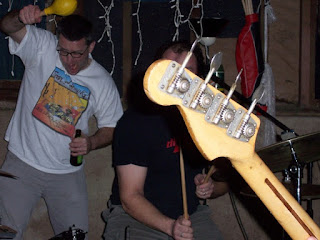 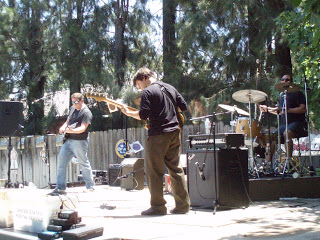 I have blogged one song from this set before, but have always wanted to post the entire set.
No vocals, as the 23 Club had no PA at the time for some reason. Ovipositor as an instrumental group....not bad!


Gary Piazza has this one up at his page, too, but I wanted up on mine.
Thanks Gary.
Posted by Mark Pino On Drums at 4:22 AM No comments:

Cartoon Justice with Bob Marsh, Crystal Pasucci, and Gretchen Jude up at Archive.org 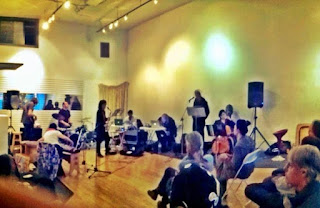 Right before this set, I got a call from a prospective employer: did not get the job. Did steal softly, though. Good memories.

Posted by Mark Pino On Drums at 3:08 PM No comments:

Cartoon Justice this Monday in Sacramento! 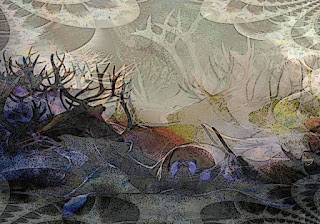 We have been looking forward to this gig.

Posted by Mark Pino On Drums at 7:07 AM No comments:

Ovipositor live on KDVS 2005 up at Archive.org


This was one of Matt's last gigs with Ovipositor. I feel that at that time, after several local shows and a short tour up to Bellingham WA and back, our sound had really gelled.
Surely the mutual affection for the late lamented Jason Batzer remains.
Posted by Mark Pino On Drums at 9:49 AM No comments:

Cosmists live at Luggage Store Gallery 2/4/16 up at Archive.org

After this set, Joe Lasqo had some really nice words for me.
Posted by Mark Pino On Drums at 11:33 AM No comments:

Alphastare vs. Infinite Plastic Internal live audio up at Archive.org

I recall this being a fun show. Jim and I spent several weeks rehearsing for it.
Jim now lives near Washington, D.C. with his wife Millie. He's playing regularly at Rhizome, along with leading a Gilles Deleuze discussion group there! Go Jim!

This was Cosmists first live show, Nov. 2012 at Studio One in Oakland CA.
The mood of the evening was incredibly manic as I recall. This seemed to have to do with the Presidential election that was mere days away. My, how things have changed.
Cosmists were a fun band for several years.
Thanks to Andrew Joron and CJ McCaslin for taking that ride with me.
Posted by Mark Pino On Drums at 9:06 AM No comments: