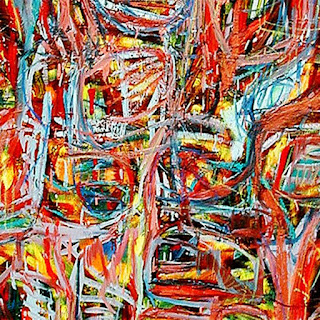 Tomorrow night at Gold Lion Arts in Sacramento, I'll have the honor of playing with Brandon Evans Large Ensemble! REALLY stoked to have another shot at Brandon's compositions! HELL YEAH!
Details here:

This is going to be great!

Posted by Mark Pino On Drums at 6:25 PM No comments: 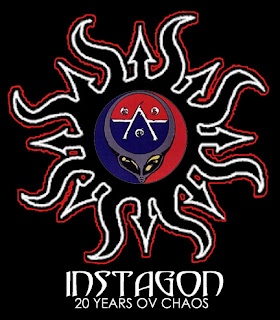 I'm happy to say that I'll be playing with Instagon this Monday in San Francisco! Details here:

Also on the bill will be the mighty Tri-Cornered Tent Show and God Dog from Davis!
As always, I look forward to participating in Lob's ongoing musical experiment!

Posted by Mark Pino On Drums at 4:56 PM No comments: 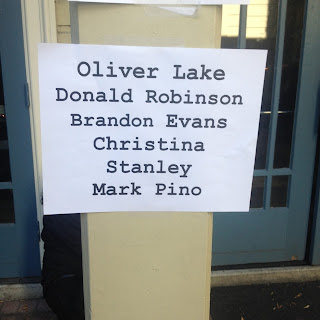 Now that this gig has come and gone, I have to admit to be feeling a bit bummed. Not that it wasn't enjoyable and rewarding, as it certainly was on many levels; it's just that now that all of the hard practicing I did for the damn thing won't be quite as necessary, I feel slightly out of steam. Ah, well, I'm sure that it'll pass.
Did I mention that it was an enjoyable gig? Yes, for sure. Let me speak a bit to that. After arriving to Community Music Center, Brandon Evans and I spent a bit of time chatting about life and such before going over his chart for the show. Made up of about twenty motifs that fuse colorful Western notation with personal, esoteric signs, the chart seems to me to be less a solid territory and more of a matrix within which to get joyfully lost!
There were definitely times during our forty-five minute set in which I did feel slightly uncomfortable, but, per our soundcheck/rehearsal and pre-gig talks, that is a big component of the overall idea. That said, I also felt, at times, to be sublimely connected with Christina and Brandons' playing. Hopefully they, and the audience, heard things that way, too. The interaction felt good to me, maybe even a bit more than good. The score most assuredly was a bulwark for me, at the more "lost" moments. There was never really any time during which I felt the absence of some sort of musical possibility.
The most frequent feedback that I got was "..intense!" Seems OK to me!
It was also really cool to hear Oliver Lake live again. His duo set with Donald Robinson was beautiful.
Many thanks to Brandon, Christina, Rent Romus, and all of the wonderful Outsound staff. You all are fucking amazing.

Below: Brandon sets up for the run down, Christina's rig 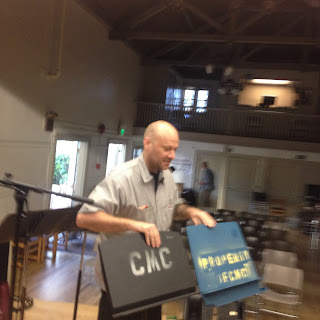 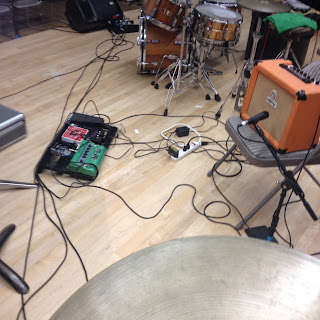 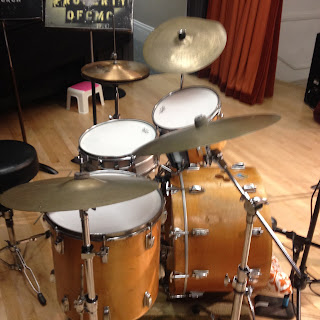 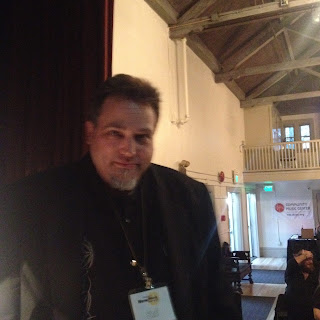 Below: Evans/Stanley/Pino Trio, in action. Photo courtesy of Charles Smith, thanks, Charles! 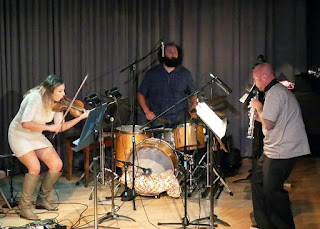 Posted by Mark Pino On Drums at 3:57 PM No comments:

I'm very excited to be playing in a trio with Brandon Evans and Christina Stanley this Thursday, as part of the 2016 Outsound New Music Summit!
The concert will take place at Community Music Center in the Mission District of San Francisco.
Full details here:

I am thrilled to be on a bill with Oliver Lake and Donald Robinson as well!
If you're in or near San Francisco this Thursday evening, please consider attending this show!

Posted by Mark Pino On Drums at 5:45 PM No comments:

Cosmists Ontological Printing up at Bandcamp 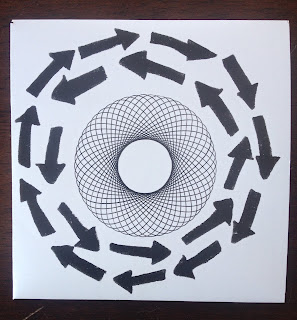 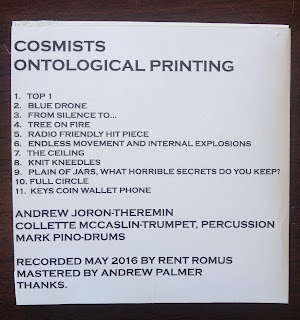 Cosmists first physical release, Ontological Printing, is done, and is available!
If you read this post, and would like to order one, please leave a comment.
I hope to have the bandcamp digital version up within a week or so.
Hooray!

Posted by Mark Pino On Drums at 6:41 PM No comments: 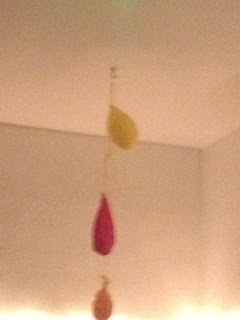 I guess that in some ways last night's show at Oakland.Secret was second fiddle to the events going on in society, even for those that played or attended. The space is right across from the 980 ramp on which several thousand people blocked the evening traffic as a reaction to societal upheaval and its attendant killing. Indeed, as I waited for the music to start, I talked with people that watched as 880 and 980 backed up, and additionally spoke with my wife, who told me about the sniper casualties in Dallas. Bleak news, all around, and I felt those vibes for sure.
Surplus 1980 played a six song set. Some renditions felt really great, and a few felt wobbly. At one point during 99 Is Not 100, it seemed as if everyone was playing a different part. I've pondered that in the hours since the show. It never gets easier to have that experience when playing linear music, but, as I've aged, I've found it easier to feel unstressed by it. Sometimes things collapse! The energy certainly was high, and, thankfully, we managed to play around the gaffs. Hopefully all other members of Surplus 1980 can have a more philosophical perspective, too. It seems as though Question After Ended Question was played almost perfect, and Ed Saad and Motivated Song About Procrastination also seemed fine. Again, the energy was high, and this, hopefully, obscured some of my sloppiness.
Playing once more with bass player Tom Ferguson was particularly fun. He OWNED it. Powerful, man!
My favorite part of the evening occurred when this woman starting yelling at Mel, telling her how kick ass she was. Instant surrealism!
The other bands, Dantel Hood and Cash Pony, were fucking excellent. It was a real pleasure to see and hear them. Many thanks to Cash Pony drummer Gabe for letting me use his beautiful old kit and cymbals.

Below: Drums, and Tom F. up close and personal 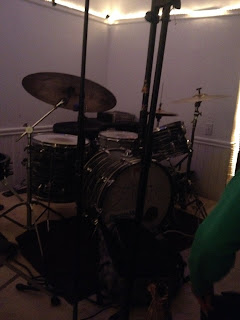 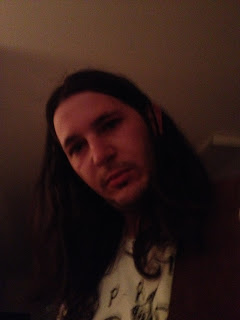 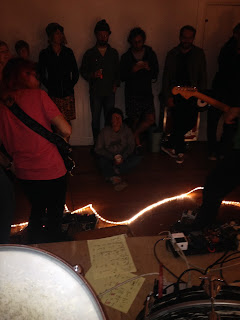 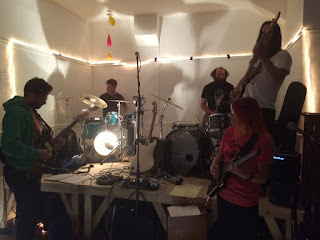 Posted by Mark Pino On Drums at 3:43 PM No comments: 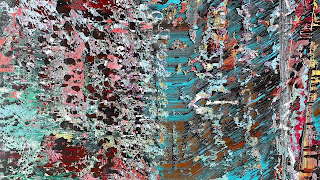 Surplus 1980 will play this Thursday, 7/7, at Oakland.Secret. Also on the bill will be Cash Pony and Dantel Hood.
Details:

Posted by Mark Pino On Drums at 5:02 PM No comments:

These clips were filmed at the last Ovipositor show, Hemlock Tavern SF in July of 2010. A few days afterward, Colin and I had a huge falling out, which has never been resolved.
Ovipositor was a fun, creative band for about 6 1/2 years, and then not fun for about six months.
One door closes, another opens, one and all...

Recorded in Berkeley, CA 6/4/16, Berkeley Arts Festival Building.
Thanks to Amanda for sharing this!
I just wish that my reading skills were better. Something to work on.
Posted by Mark Pino On Drums at 3:44 PM No comments: