Many thanks to Brandon for doing post-production on this!
Posted by Mark Pino On Drums at 9:56 AM No comments: 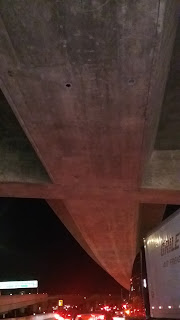 During a long slog across the Bay Bridge, ebolabuddha member Plague and I had an extended conversation about audio engineering, aesthetic choices, and historical perspective. Really good stuff. During the silent parts of the ride, I thought about our appearance at Music City as in essence being some kind of ritual act. Not so much a show, but more a small group of people in a room together, focusing intention.
After finally making it over to Polk and Bush, Eli, Lorenzo, Steve, and Jaroba were there to welcome us. We pretty much started our sound ritual right away. Things got kind of crazed. Jaroba led us with some trance baritone sax sounds, Steve and Lorenzo played spidery riffs on acoustic guitars, Eli pounded a bass drum, Plague wore a chain, I played a floor tom. All of this was, of course, accompanied by us and few other people reading from assorted texts. I stuck to my beloved Ovid.
Things got crazed and odd, that's for sure. I recall beating the tom tom with a shaker, which gave me a cut on a finger. I recall Plague chanting about a deceased frog. I recall Eli shouting out texts. Good times!
After a while, Eli signaled us to stop. We stopped. The overhead lights came on. Our ritual had ended. Driving home, Plague and I listened to Funk on KFPA and I drove without regard for the rules of the road, at least on the streets of SF. Perhaps my intentions had been rewarded with some kind of grace.

Below: gear used, and a mystery photo snapped inadvertently 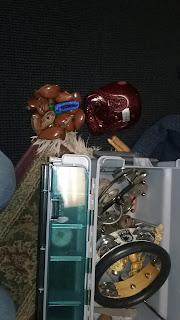 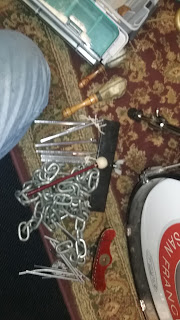 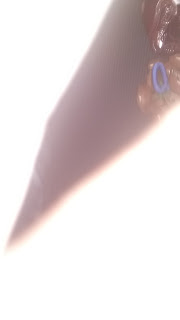 Posted by Mark Pino On Drums at 8:34 AM No comments:

ebolabuddha this Friday in San Francisco! 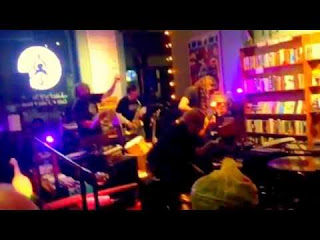 ebolabuddha starts the show at 8:30, semi-acoustic set with shitty flutes.
Bring a book!
Posted by Mark Pino On Drums at 5:46 PM No comments: 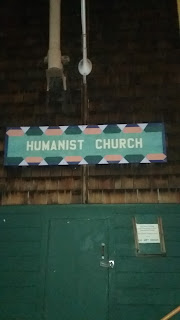 This Surplus 1980 show was a private event, a birthday party for our pal Polly. Hence, no preview or advertising.
Set at Oakland's Humanist Hall, a building that I've driven past many times over the years, it was an enjoyable party, with really fine vegan food, board games, spirits, and just generally cool vibes. Former Surplus 1980 bass player Steve Lew showed up: he beat me at Scrabble. No surprise there. Dude's a PhD.
As for our set, it was a bit truncated, with only Moe! on guitar songs. I got to play a sweet Yamaha set, courtesy of master drummer Jordan Glenn. Thanks Jordan!
I was really happy with our sound. Even with no soundcheck, we managed to rock out pretty well. Temporarily Present seemed particularly well played. Along with our songs, we put in two really kind of bad covers, just to keep the mood light. I can't mention them, as there seems to be a slight worry about certain members losing a bit of street cred. Needless to say, I laughed a lot while playing some pretty corny tunes from the Pop cannon. During this segment, Moe! destroyed a children's size plastic drum kit. It was funny to see him stabbing the heads and throwing that doomed piece of plastic around.
A better way to spend a Sunday evening I wouldn't be able to find.
Many thanks to Polly and Jordan. 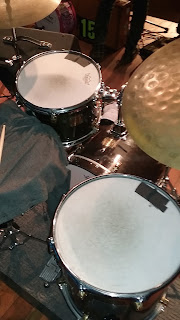 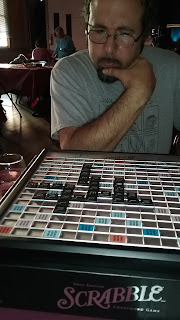 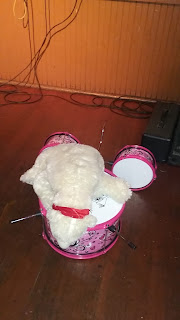 Above: sacrificial drums
Below: Surplus 1980 at Humanist Hall (photo by Thomas Scandura, thanks Thomas!) 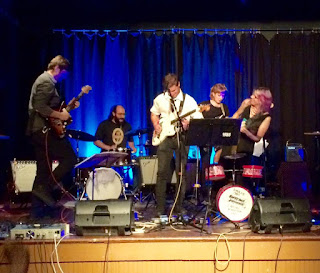 Posted by Mark Pino On Drums at 5:15 PM No comments: 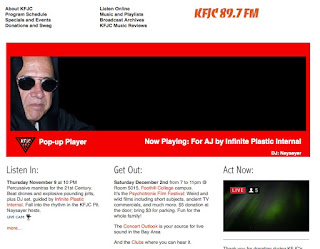 After a lovely drive down 680 from Concord, during which I admired the post-rain storm mixture of later afternoon sunlight, rain clouds, and East Bay Hills (rainbow underneath Mission Peak, hell yeah!), I found myself ensconced within KFJC's Pit for the makeup session of Infinite Plastic Internal's delayed live broadcast from June of this year.
I had been planning the set up for this session for the past month or so, diagramming the placement of drums, electronics, gongs, flutes, and vocal mic for the latter. Thankfully, Eric, Frank, and the KFJC staff of engineers were at their usual accommodating level; what a great group of people. Eric mentioned that I was one of the more punctual acts to arrive that he could remember! I was raring to go, that's for sure. Again, there had been several months for planning.
The set was guided by a visual score that I'd drawn, in which the electronics would start "thin" and proceed to grow more "thick". On top of that, I placed intermittent bursts of gong, flutes, drum set, and space. A recent conversation with tenor sax master Josh Allen had me also integrating the clock: five minute intervals were placed in the score, and I used the clock to willfully pace the set and its actions. Many thanks to Josh for sharing his theories on that. They really helped me to integrate conceptual and physical pacing within the set.
All of this preparation and conceptualizing lead to my desired 45 minutes of Infinite Plastic Internal drone and freak sounds. As the sounds started, I felt relaxed and focused enough. Things seemed to unfold and emerge at a good pace. I was particularly happy with the sound of my old Ludwig bass drum, along with screws dragged across the rims of the 18" roto tom. Smaller hi hat cymbals were used as well, which helped to reduce some of the "shimmer" that I get from my left foot when playing free drumming with wider hats. That seemed to make the drum set sound a bit more clear. The electronics also felt really good. It was cool to feel and hear their oscillations and random mixtures. It's my hope that this came across to anyone that may have been listening.
It seemed as though it was a successful Infinite Plastic Internal musical ride, after which DJ Naysayer interviewed my for 30-35 minutes, which was fun and interesting.
KFJC: the Gold Standard of radio. 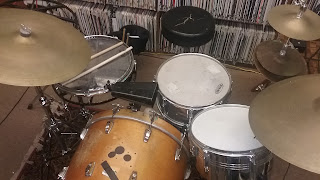 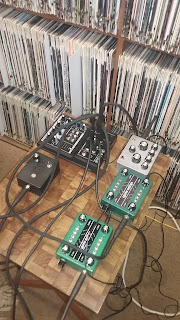 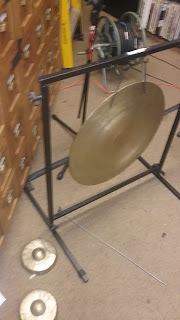 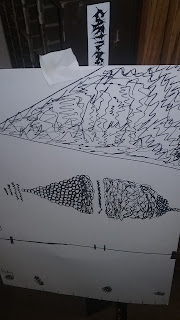 Above: visual score
Below: interview selfie 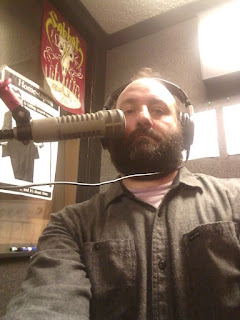 Posted by Mark Pino On Drums at 8:07 AM No comments: 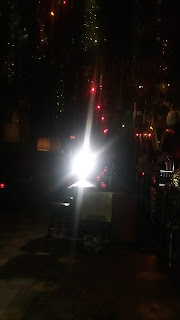 Sadly, no traditional walk around the Mission last night before the show. It was cold, albeit tremendously clear, so I opted to just park and get into the Make-Out Room and check in with Mika, Kersti, Thomas, and Jaroba. I must say that as I trolled for parking around 22nd St., I did get in the usual reflective mood re: changes in SF and myself. The City remains a beautifully odd place. It also seems increasingly alien to me, but I guess that I've gone over that ad nauseum.
With Cartoon Justice bass player Eli away on vacation, Mika pulled in Thomas Harrison Jr. to join in, along with woodwind player Jaroba. We did not get any time to rehearse, aside from a short email exchange which contained samples of the pieces that we'd decided to play for Make Out Monday. Things took a bit of time to gel. It seemed as though the first five or six minutes of our 42 minute set were spent poking in and out of each others' sounds, trying to establish some kind of vibe or groove. After a bit, I feel as though the total group, Harmelodic sound which we aspire to had begun to emerge. Some decent, grooving 6/8 Jazz Latin stuff on Spirit Aligned Truth lead to me taking a brief solo. That felt nice. We followed with a North African-inspired piece and ended with the relatively Free Villa d'Ornette. Take a guess who that one is dedicated too.
As I mentioned Cartoon Justice is expressly Harmelodic in approach: we aim to play a group music, based on Blues feeling and melodic guitar sketches. All in all, I felt as though we were able to float to that desired space, creating the mood that was sought.
After our set ROVA and Rent Romus's Life's Blood were tremendous. How cool to play on bill with so many great musicians.
Many thanks to Timothy Orr for letting me use his beautiful drums and cymbals!

Below: Kersti and Mika set up; mysterious T. Harrison Jr 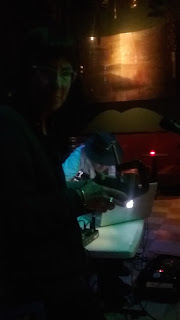 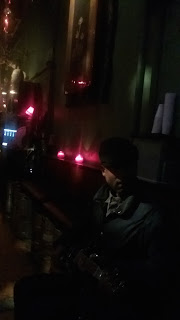 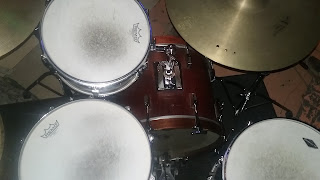 Posted by Mark Pino On Drums at 5:57 PM No comments:

Shards music up at Bandcamp!

Due to other bands using Shards as their moniker, George Earth and I decided to use "SF Shards". That said, it'll always be Shards to me. 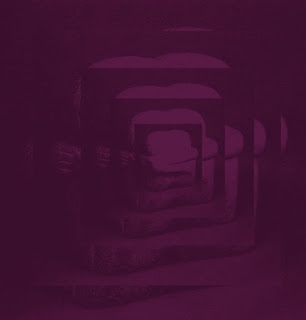 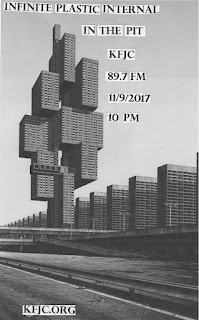 Next week is lookin' good.

Posted by Mark Pino On Drums at 5:33 PM No comments:

New digital tracks from Norcal Noisefest XXI up at Bandcamp!

Big ups to the Norcal Noisefest crew!
Posted by Mark Pino On Drums at 6:27 AM No comments: