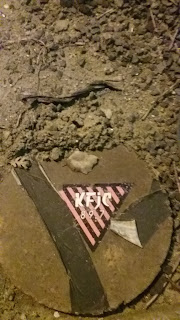 Spring time after good amounts of rain is my absolute favorite time in California. My drive down 280 to KFJC on the evening of 3/29 gave plenty of pretty spring views. The hills appeared emerald, the air was clean. Lovely.
Jack Hertz and I had decided on giving our duo the Dead City Shaman a few weeks back. Jack grew up in Maryland, I spent time in Virginia, and we both had formative musical experiences in Washington D.C. Hence the name.
We both arrived to KFJC a bit early, and were able to have our gear set up quickly for Grower and the engineering staff. A bit after 10 PM, we started to play. Our set unfolded with a nice slow pace, me on waterphone, Jack on synths and processing. After a good wait, I switched to electric m'bira, in much the same manner as our Luggage Store gig in January. Things started to loosen and roll, but remained spacious. Jack started to throw in vocal samples, sliced and diced on what turned out to be a simple iPhone app. At this point in the set, I started to feel trance-ed out. The blue light in the Pit surely helped here, when paired with the sounds we were generating.
Things got wild, and we played and played. All told, our set lasted almost two continuous hours! Balafon paired with shakers, flutes paired with synths, any and all manner of electronics processing occurred as the sounds fed into Jack's loop machine. There were times when I stayed silent, simply letting Jack's synth sounds drift over my consciousness. Thankfully, I was always able to drift back in and play some more.
After a brief interview with Naysayer, we drifted out into the parking lot to the sound of frog calls in the still warm night air. Other than their sounds, it was quiet. Beautiful.

Below: Jack and gear; Jack and me in the interview room 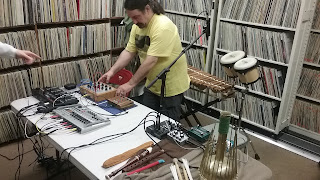 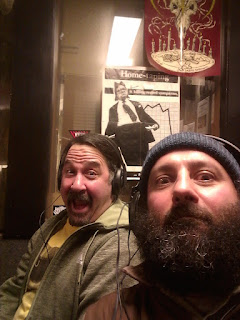 Posted by Mark Pino On Drums at 8:17 AM No comments:

Playing with Jack Hertz this Thursday on KFJC! 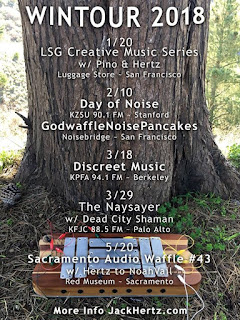 Posted by Mark Pino On Drums at 7:00 AM No comments: 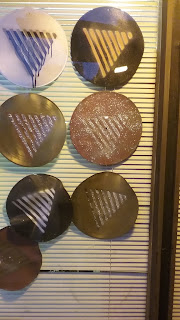 As is always the case, I was really excited to be playing at KFJC's Pit last Thursday night. Surely, Andrew and Brian were too. We're so lucky to guests on Naysayer's show! Crow Crash Radio sometimes go months without opportunities to play, and KFJC's far reach is a real boon to us as far as getting our sounds "out there".
Accordingly, we planned out nice, long set, and placed newer ideas with older tunes side by side. At 10PM, we began to play. The first set went pretty close to an hour in length, with most songs stretched this way and that. A cool loose feeling prevailed, usually the case with Crow Crash. We're not really ever in a hurry to "play it right". We just let things unfold. I had fun exploring a somewhat larger kit; hell, even a China cymbal was included! I even got to take a short drum solo! A high point of the set for me occurred when we realized a completely improvised piece, led by Brian. How I love walking into new musical areas. Andrew seemed particularly happy at points. He's going through some stuff currently, and I hope that the act of playing music made his spirit a bit more free.
After a short break for an interview with Naysayer, we hit again, whipping through some quick versions of about four or five songs. Although it was nearing midnight, and fatigue was setting in, it felt as though we had good focus. Tightness added to the looseness!
KFJC still rules. Many thanks to Naysayer and the KFJC crew for being so damn great.
Crow Crash Radio will play in SF in a few weeks!

Below: drums!; Brian and Andrew set up 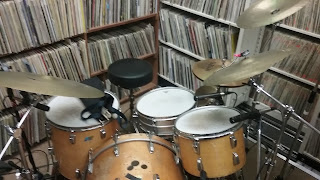 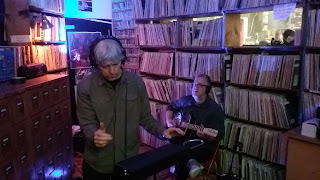 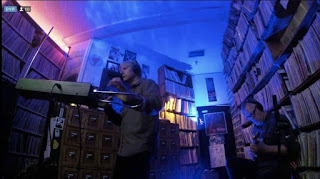 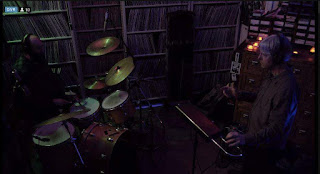 Above two photos: screen grabs by Rose, thanks Rose! 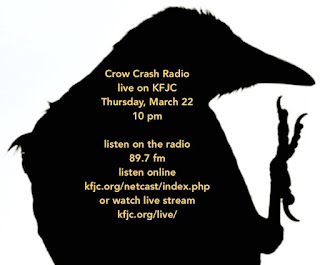 Crow Crash Radio will be playing in the Pit at KFJC tomorrow evening, 3/22!
Tune in here at 10 PM Pacific Time:

We'll be playing recently written tunes, along with some older ones, too.
Posted by Mark Pino On Drums at 6:34 AM No comments: 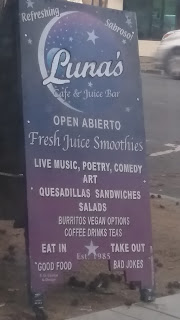 Last night's show at Luna's was supposed to feature, along with Sacramento Fusion band Exigency, Brandon Evans and myself in duo. Sadly, Brandon had fallen victim to this winter's horrendous stomach flu bug, and had to back out. After scrambling for a few hours, and at one point basically cancelling, I heard from multi-instrumentalist and all around great dude Tony Passarell that he'd be able to sub for Bran.
A really lovely, rain free drive up 680 and 80 had me marveling at lovely flowers and the green sparkle that makes California so magical in March. Seeing the snow capped Sierra foothills east of Sacramento upon my approach was great, too.
Seeing as that Evans and I had planned on using a composition that I'd worked out, Dream Etude, I figured that Tony and I should do the same. A quick confab with him, in which he transposed my simple melodic line pretty easily, and off we went. We started with a cool rubato exchange, per the sheet music, which led to some quicker melodic/percussive exchanges. Tony and I have played together in duo before, so I figure that there may have been a bit of back and forth probing going on. Our pace picked up after a bit, eventually leading to me busting out some spontaneous poetry. It felt Beat to me! What can I say, the Spirit moved me. Tony was really gracious about leaving gaps for my un-mic'd words there. Really sensitive playing. Quickly thereafter, we mixed it up, me on brushes and Tony wailing. Free Energy! Yeah!
A bit later, and we got into some short punctuation with scraped drums/cymbals and staccato tenor bursts, on which Tony utilized electronic enhancements on his tenor sounds. This passage had me switching to gong and wooden flutes, where I felt shamanic as all get out. Tony laid out and let me do it there, before joining back in for some more tenor/traps mixing, a bit more readily rhythmic this time.
After about thirty minutes, Dream Etude ending. Tony suggested that we play one more, which I should start with a drum roll. I obliged happily. We burned for about five more minutes on a tenor madness tip, Tony really laying it all out, and done.
I have to say I felt really good about our set. The only bummer about the evening was Brandon Evans missing out, but Tony subbed really elegantly. Many thanks, Mr. Passarell!
Big ups to Billy of Exigency, for letting me back line with his beautiful Yamaha kit. Thank you, sir.
Sacramento is lucky to have Luna's Cafe.

Below: live shots by and courtesy of Russ Tucker, thanks Russ! 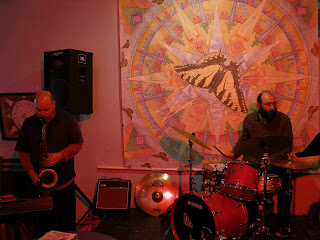 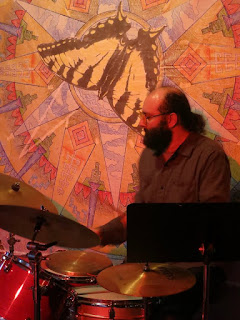 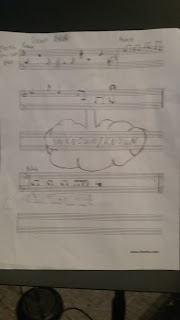 Above: Dream Etude, my first written composition since 1994. There will be more....

Posted by Mark Pino On Drums at 5:45 PM No comments:

Posted by Mark Pino On Drums at 6:23 PM No comments:

Playing in duo with Brandon Evans this Monday! 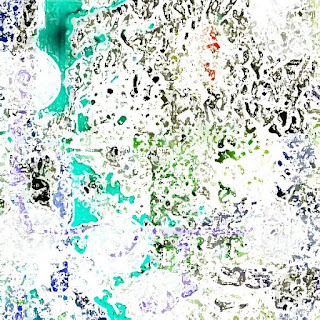 Posted by Mark Pino On Drums at 6:06 AM No comments: 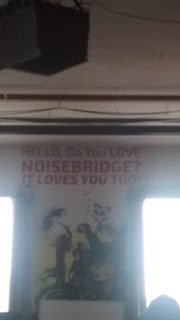 It had been way too long since Failure Cock played live before today. Lack of opportunities and scheduling conflicts kept Scarp, Eli, and myself away from it for quite some. I felt really glad to be remedying that as I headed over to the Mission in somewhat gloomy weather on BART, my entire rig, consisting of a Styl-O-Phone and delay pedal in a backpack. What an easy commute.
As is usually the case with Godwaffle Noise Pancakes shows, the set up was somewhat frantic and jittery, with the PA arriving a few minutes before show time. All systems go after a bit of trouble shooting, thankfully.
Failure Cock played second on the bill, with instrumentation of bass guitar from Eli, shop vacuum cleaner from Scrap, and my stated rig. Eli brought really nice low end sounds to start, which paired with the scrawl from the Style-O-Phone as its sounds bounced out. Scarp got really cool banshee howls out of the vacuum cleaner, utilizing a great older mic. This was a really cool thing, and I was seriously delighted with it. It sounded like a damn Black Metal vocalist, wailing the Noise. So great. Eli eventually brought his "cell phone slide on bass strings" technique out for some glassy licks. Dude's just a great fit in Failure Cock, as always brings his best game to our sets.
As for me, I found the three octaves of the Style-O-Phone to be a blast. This limited, low tech synth is quite enjoyable to play. Alone, it wouldn't have cut it, but within the context of Scarp and Eli's sounds, it seemed to work pretty well. As always, I consider Failure Cock to be a band, and, as always, within a band setting it's advisable to leave some "out", to leave room for the other players' tones.
I'd be remiss if I didn't mention the cool community feel of the afternoon: a solid set of people showed up, hung out, talked, listened, ate pancakes, and just generally put forth groovy weirdo vibes. Pancake breakfasts aren't only for Masonic lodges, let's just say that.
I've heard that Noisebridge Hacker Space may be losing their lease. How I hope that that isn't the case. Hopefully there will be more Godwaffle events there, but the rumors seem to indicate that 3/10/18's one may have been the last there. Double bummer.
Big thanks to Grux and the Godwaffle Noise Pancakes crew: they are EXCELLENT.
Hopefully, there will be audio up at Failure Cock's Bandcamp page soon! 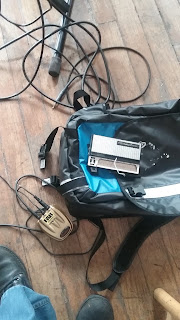 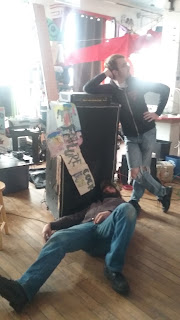 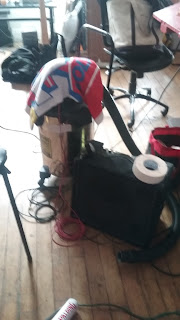 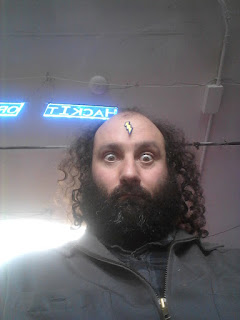 Posted by Mark Pino On Drums at 7:42 PM No comments: 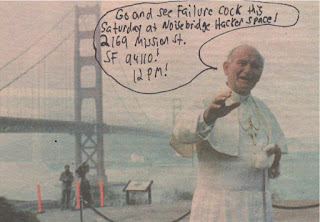 We're looking forward to it. It may be the last Godwaffle at Noise Bridge, though.

Posted by Mark Pino On Drums at 6:14 AM No comments: