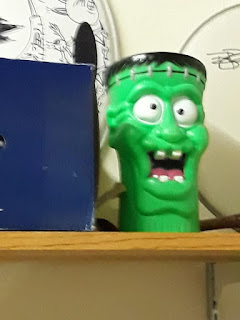 As I pulled up to Patrick's Place in Sunnyvale last Saturday night, I feared that I may have either been misdirected or had written down the wrong address. In my imagination, the place had been some kind of barn in an orchard. Turns out that that vision belongs to a Sunnyvale of 50-60 years ago. Instead, I found it to be a large garage tucked within a fenced off compound of several houses. I found myself wondering, once I'd gained admittance, if it was a campus of some sort. Never did find out, but that's OK, because the space is groovy and roomy, with plenty of room for a group like Feral Luggage, two drum sets and all.
After watching a fun Noise performance where a guy used mic'd hair clippers and pedals to get a nice squall going and a sweetly spacious set from David Leikam's new trio, Feral Luggage rearranged the back lines a bit and began ours. As has been the case, it's really fun and inspiring to play in tandem with Patrick Telesfore, Jr. He brings all kinds of energy to our sets, and this night was no exception. We got off on three pieces for a nice 45 minutes of Null Wave, with everyone going full bore into them. I recall looking over at Mika as he savaged his guitar strings while giving off this nice glare. Eli Pontecorvo held the drums together with his bass, and Kersti's sax flew atop it all. It was a blast to me, but I'm not exactly sure if it moved the people who were in attendance. Indeed, I saw a few people stealthily walk out while we jammed. Ah, well, I guess it ain't for everyone, as usual.
After we played, one audience member suggested that we go back to the Big Band model, where everyone keeps their own time while one person solos, but, hey, it's 2019 and that's not how Feral Luggage rolls.
As I walked to my car in the cool night air of Sunnyvale, it felt as though the entire evening had been one strange hallucination.

Below: sweet little back line kit, courtesy of Patrick's Place; Feral Luggage seem to be not imagined 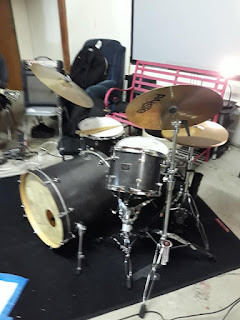 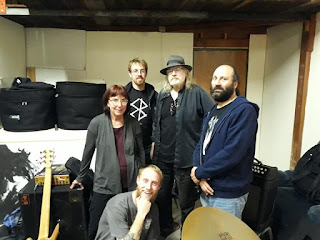 Feral Luggage will play in Oakland in December.

Posted by Mark Pino On Drums at 5:42 PM No comments: 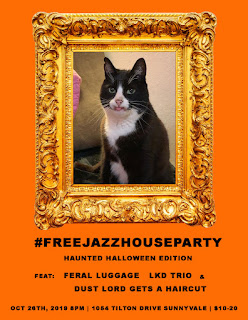 This will be Halloween show of sorts.

Posted by Mark Pino On Drums at 5:28 AM No comments: 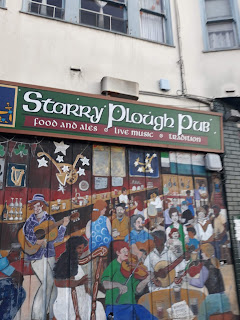 After a really disappointing record release show back in July, Surplus 1980 figured we'd try again, this time at the Starry Plough. It's a place where the band has played many times, when I've been the drummer and also before my tenure. It's known to Moe and his crew, which seems to provide some sense of emotional safety.
Before we even played, the evening's main treat showed itself to be the band Blank Square. What an impactful band! A really great blend of sounds, all moved by a killer rhythm section. I was blown away by them, and  hopefully we can play more shows with them.
As for Surplus 1980, we just barely got any rehearsals in, but that turned out to be alright. Our set had a pleasing intensity that was colored by maybe a bit of "wobble" as certain parts of the songs were remembered. As the only drummer for the band on the evening, I felt a bit of pressure to keep it all glued together. Thankfully, I only committed a few biffs. Everything seemed to roll well. It helped to have a good monitor mix, as always. I recall that at our last show there was no drum monitor. Anyway, Surplus played tightly, some people showed up, some people danced, and the entire affair was fun. Much better than record release number one by a mile.
It looks as though Surplus 1980 will be doing a very cool show next month, along with some neat work with an internationally renowned dance. Good things on the horizon, and hopefully we'll get a bit more rehearsal in!

Below: the only Surplus kit of the night; Moe S. has very strong opinions about Dubstep 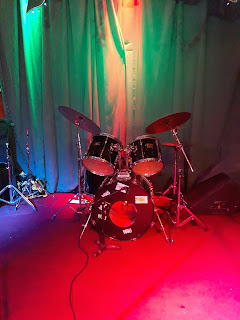 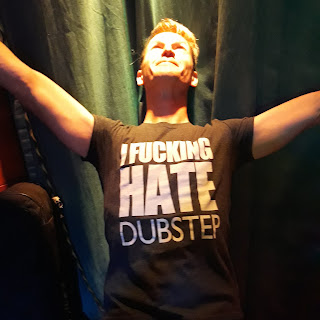 Feral Luggage live at Starline Social Club up at Soundcloud!

Posted by Mark Pino On Drums at 6:16 AM No comments:

Surplus 1980 plays this Saturday in Berkeley! 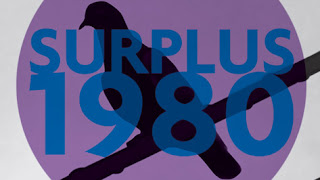 Surplus 1980 will be playing the Starry Plough in Berkeley this Saturday.

As always, looking forward to playing the music of Moe!

Posted by Mark Pino On Drums at 5:31 PM No comments:

Posted by Mark Pino On Drums at 5:46 PM No comments: