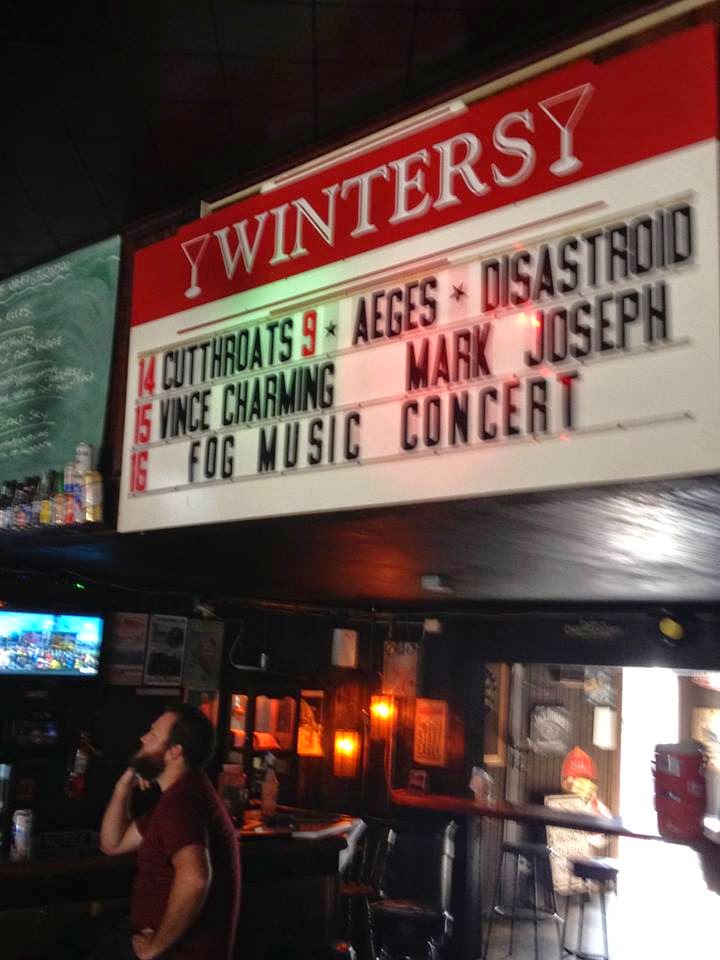 Driving over the hill to Pacifica from SF, I was reflecting on the oddness of a Noise band playing at an established roadhouse; the fact that Earspray was to play in the early afternoon on a Sunday made the proposition even stranger, but Jack booked us for the day's Fog Music Concert, and we took the gig, so, what the hell, right?
I felt like our set definitely got to some sort of strange foggy energy going. Not too many were in attendance, but another reflection that I had was that we're doing it because we like it; at least, that's the case with me!
Thanks to Jack for booking us at Winters! Sorry that our draw was, like, two people. Hopefully they bought a few beers!

Below: Carlos and Ann set up their Earspray rigs 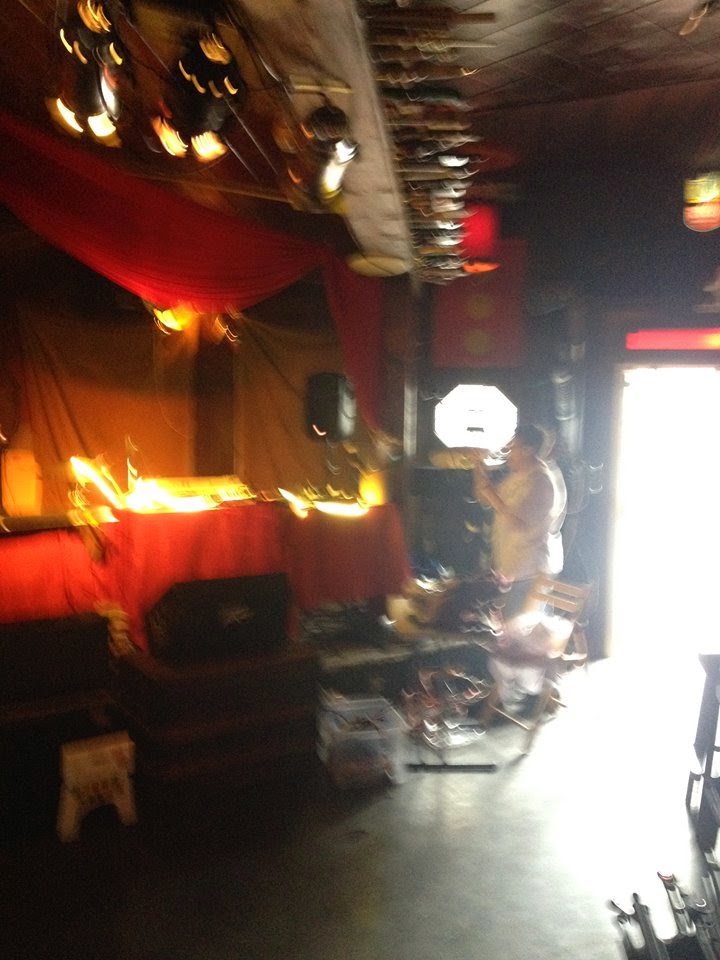 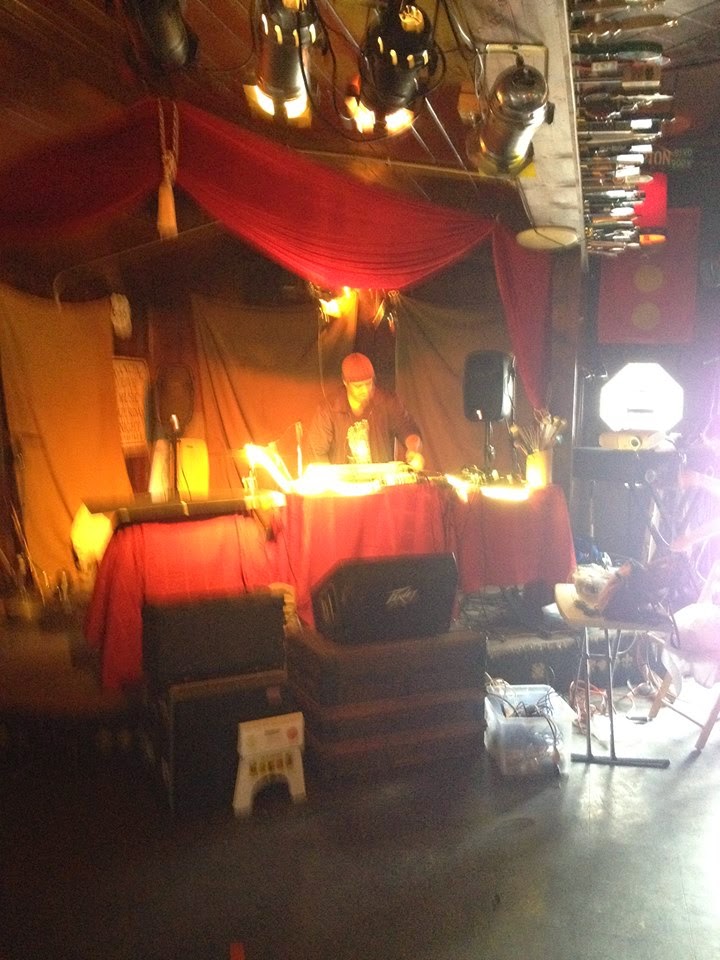 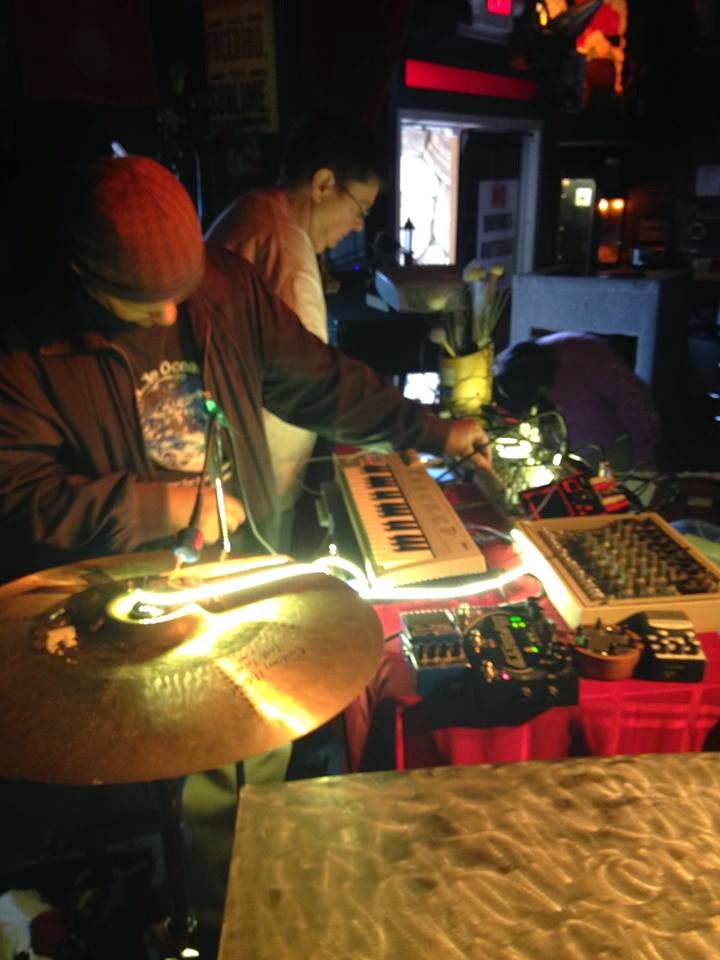 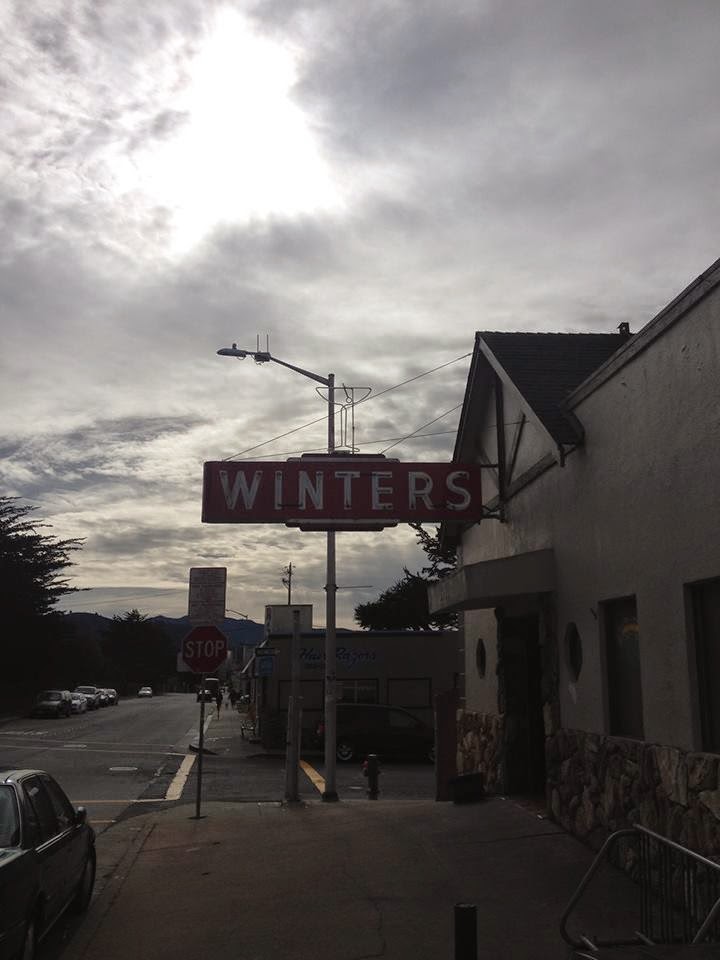 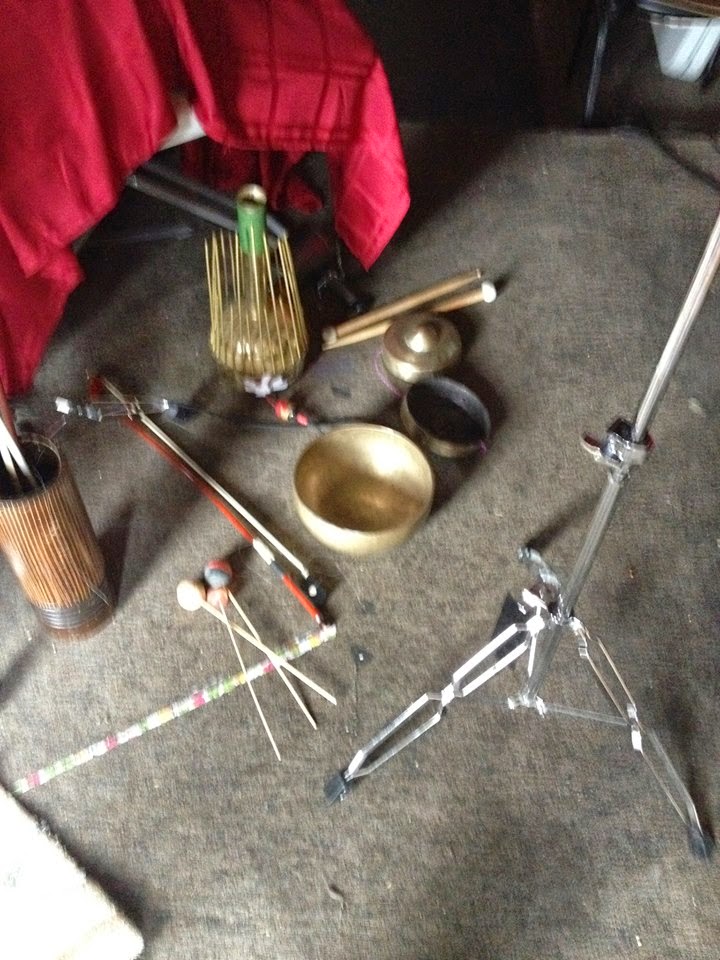 Above: my minimal amount of gear, I got some fog sounds!
Posted by Mark Pino On Drums at 6:37 PM No comments:

Earspray will play in Pacifica tomorrow! 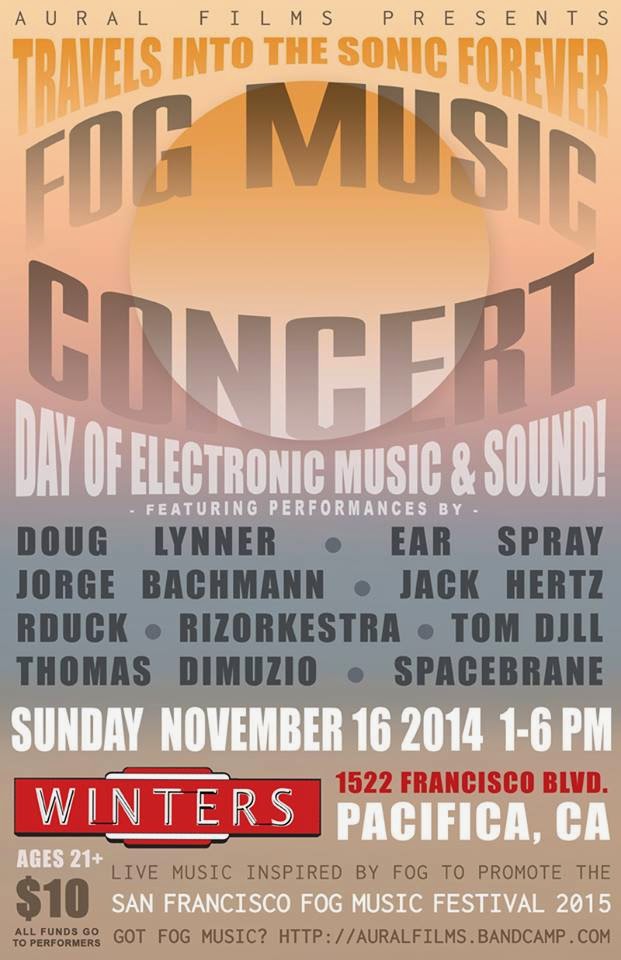 I'm looking forward to playing the Fog Music Concert at Winters Tavern with Earspray tomorrow, 11/16! You can probably tell what the theme for the show is!
We will be playing early, probably at 1 or 2 PM.
Winters Tavern is located at 1522 Francisco Blvd. in Pacifica!

Posted by Mark Pino On Drums at 8:28 AM No comments: 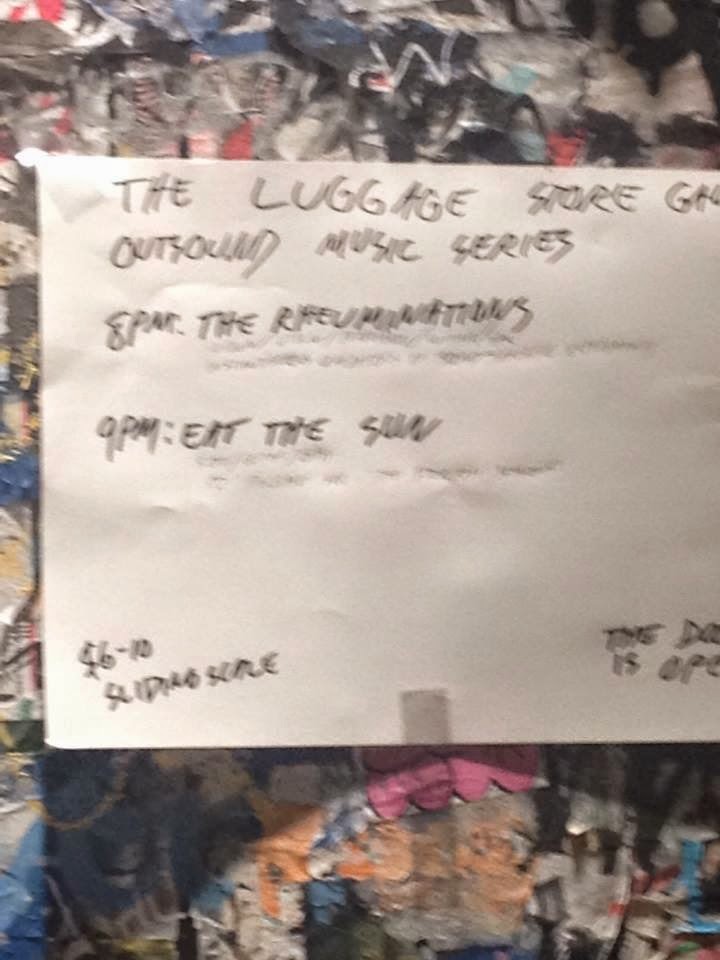 Due to aggravating traffic conditions both on the approach to SF and within the City, I showed up for this gig pretty spazzed out and rattled. I told new Ruminations members, guitarist Jakob Pek and violinist Gabby Fluke-Mogul that I'd play mellow, but that concept flew out the window and onto Market St. faster than you can say "new IPO". Don't get me wrong, there were times when I chilled it and let everyone else lead, but I definitely felt a kind of "take control" energy come over myself at times. Thankfully, Rent pretty much encourages that attitude, and I'm grateful to him and Christina Stanley for putting up with it. It was tough to her Jakob's guitar at times, sadly.
I also added a new twist to my improvisational techniques, in that I brought some graphic scores that I've been working on, for use if and when the ideas started to dry up. They ended up being ignored, as I found plenty of fuel from Rent, Christina, Gabby, and Jakob.
Needless to say, I had a blast with the Ruminations, new lineup and all! Eat the Sun were phenomenal. Jason Hoopes is clearly a rising star in the bass world.

Below: the horns of Rent Romus, and Christina Stanley in silver and gold light 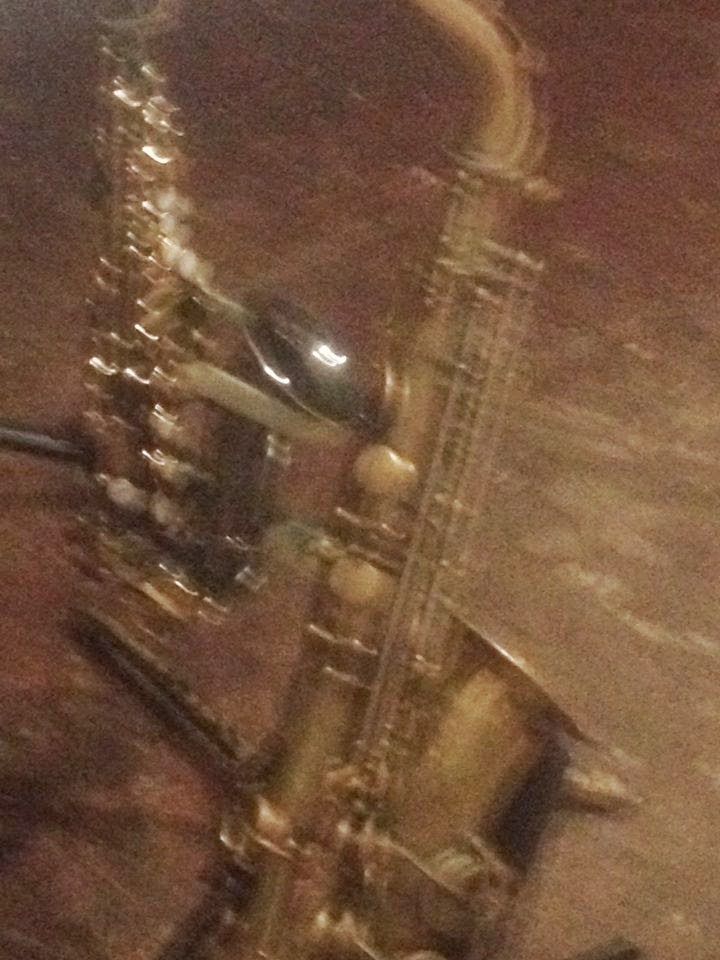 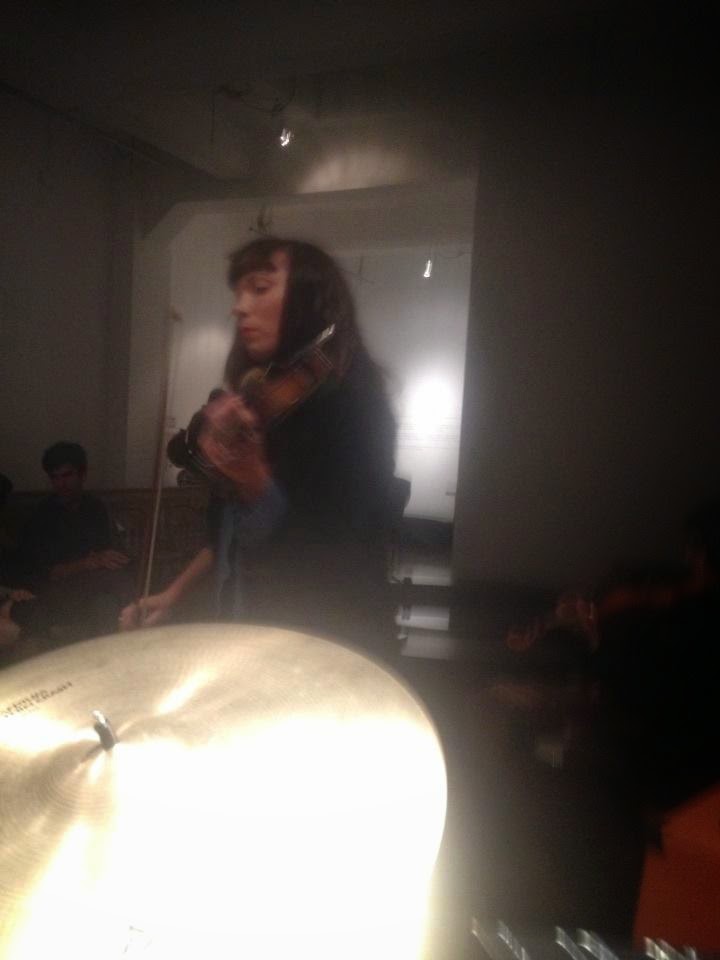 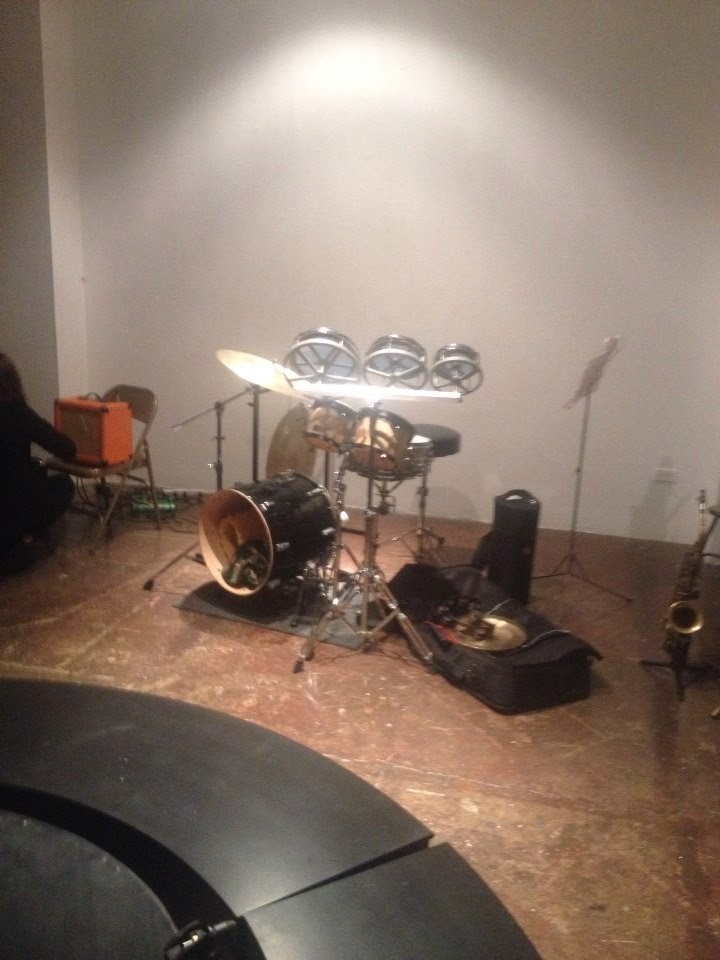 Above: Cloud Kit, Ruminations-style
Below: Graphic scores for "just in case" reference 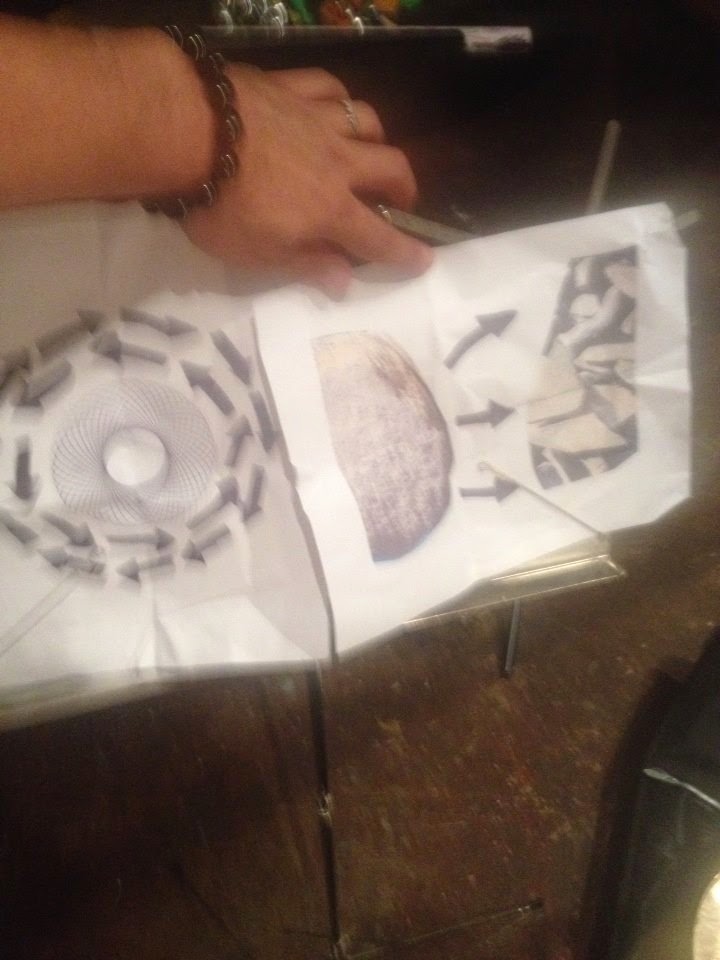 So happy to have been a small part of this process! Yeah!
Posted by Mark Pino On Drums at 4:17 PM No comments:

The Ruminations will play this Thursday! 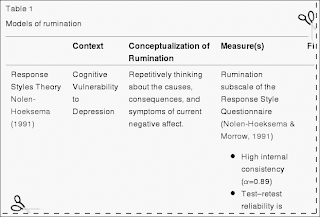 I'm looking forward to playing this Thursday with Rent Romus the Ruminations! We'll play at the Luggage Store Gallery on 11/13!
The Luggage Store is located at 1007 Market St. at 6th., and we'll play at 8PM sharp!
Hope to see some folks there!
Posted by Mark Pino On Drums at 4:08 PM No comments:

This footage from the Stork Club, Oakland CA 10/18/14.
Thanks to Alphastare for letting me sit in, and to Monica Berini for filming!
Posted by Mark Pino On Drums at 9:44 PM No comments: 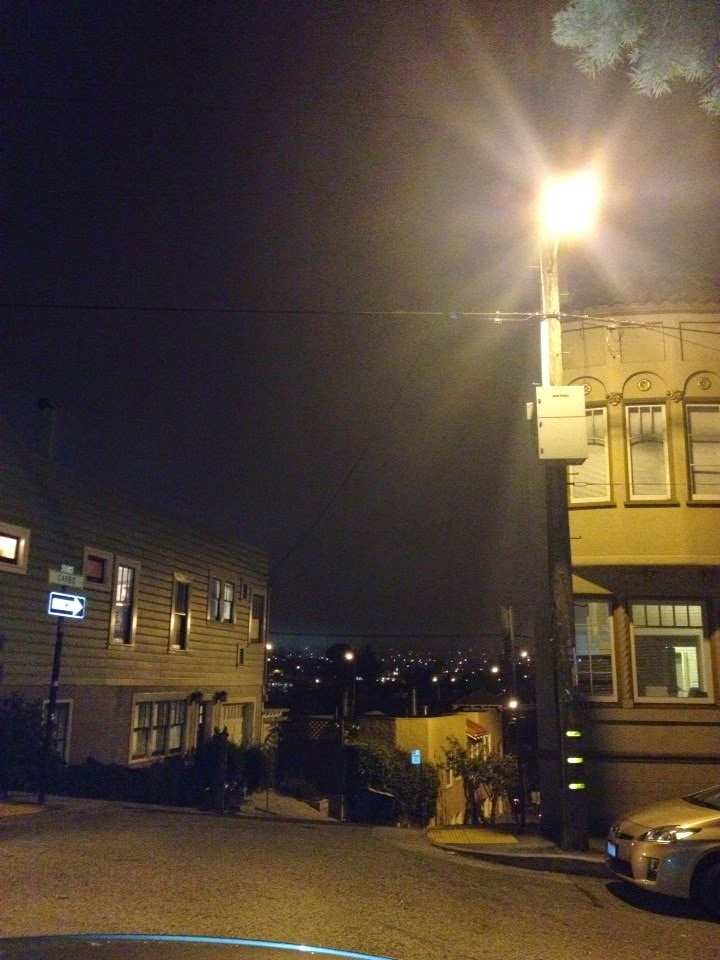 The men of Cloud Shepherd had a great time playing for the benefit of Poet David Meltzer last night at Bird & Beckett!
We played for almost thirty minutes, which, compared to recent shows, was pretty epic. It seemed as though we incorporated small duets into the two individual pieces that were conjured, but also had a lot of good full ensemble blasting.
It was great fun to hear the assembled poets pay tribute to David, and especially to see the man himself up and about in great spirits.
Many thanks to Rabbles for playing as well! Cool, low key, almost acoustic jams from their long lasting SF Punk/Folk ensemble!

Below: Cloud Shepherd set up and smile 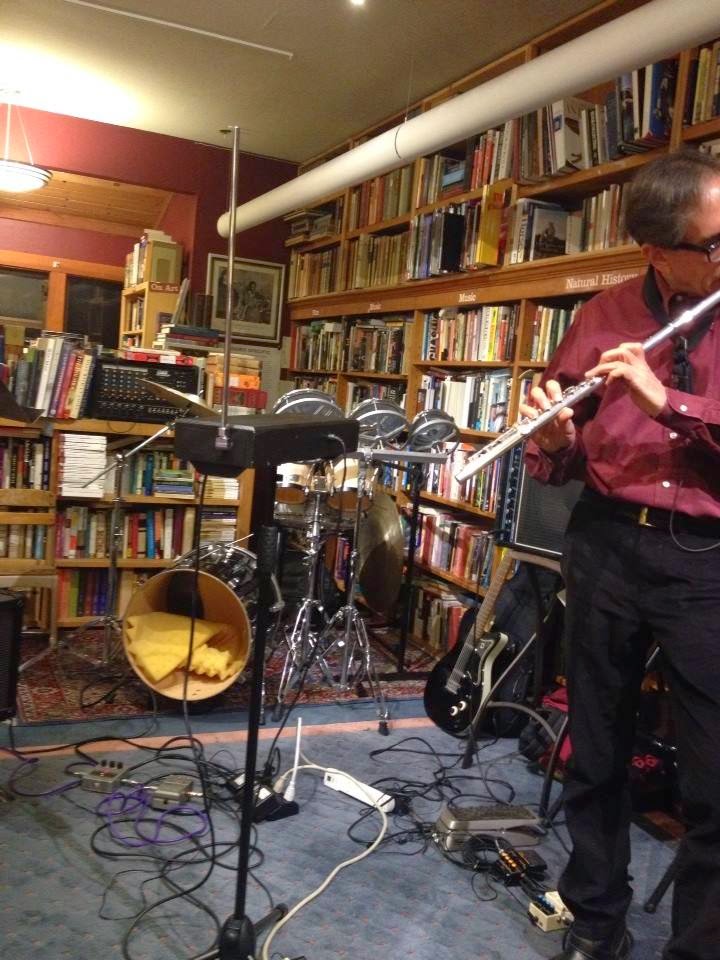 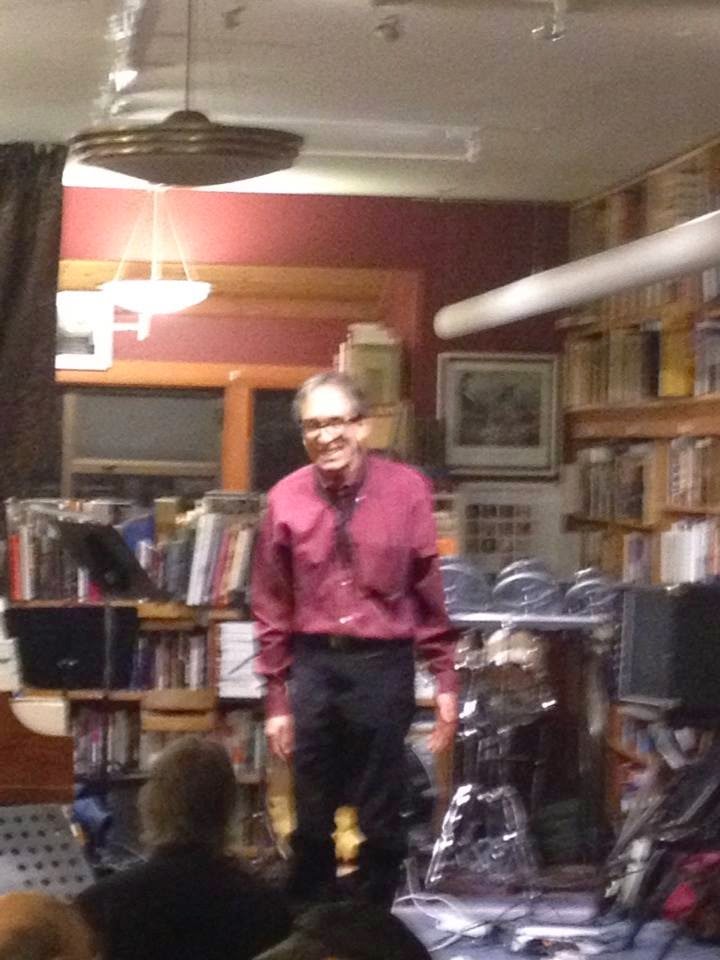 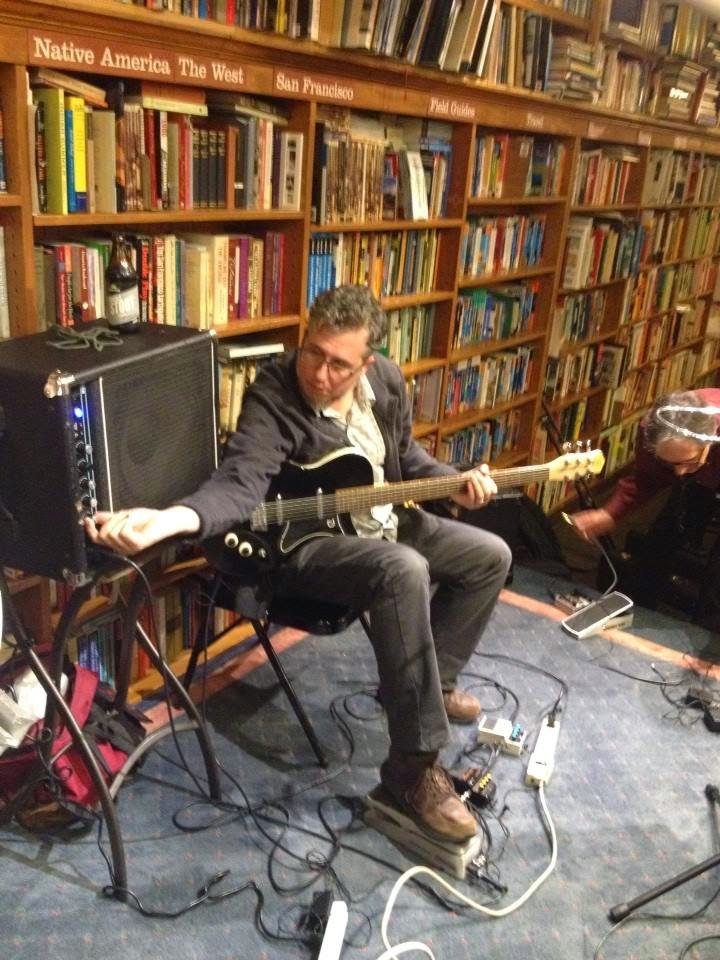 Above: Brian dials things in
Below: Cloud Kit and books, David Meltzer in a fine mood while Jamie plays on! 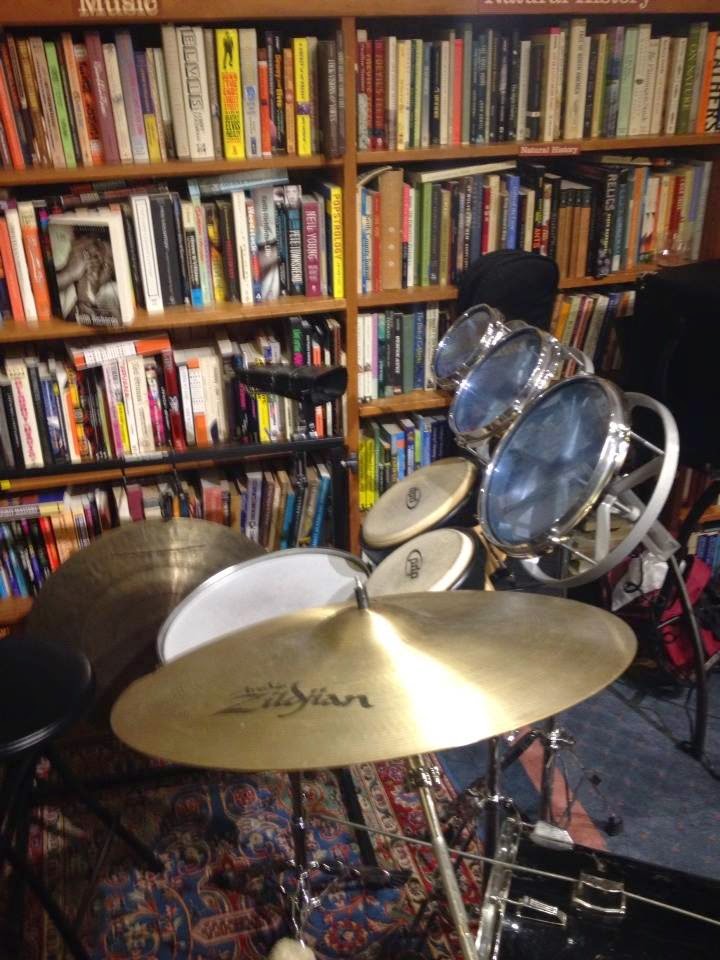 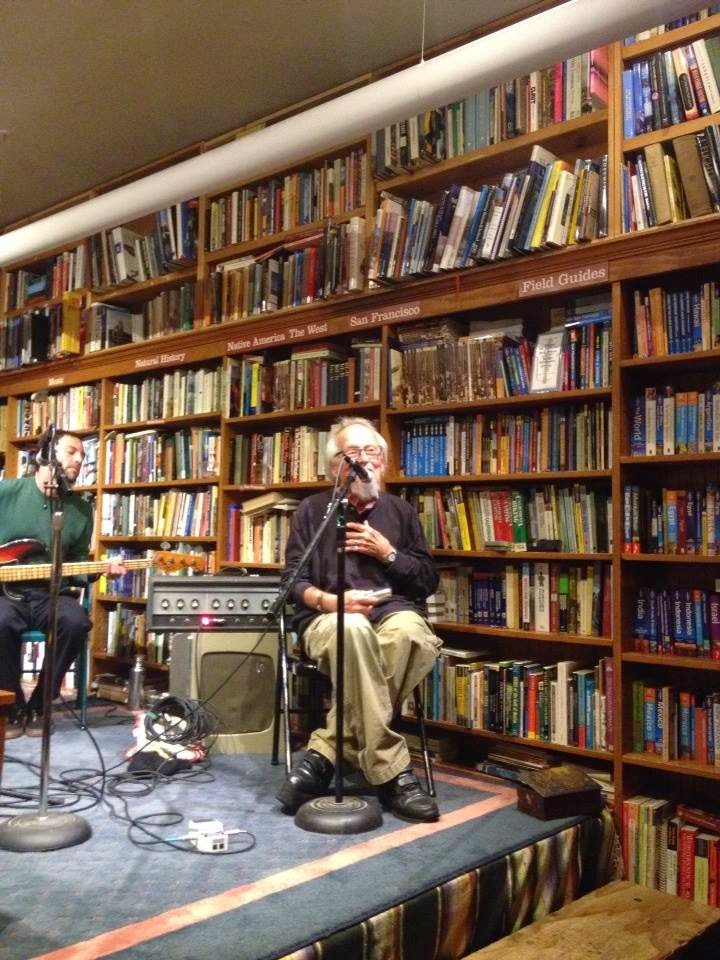 I hope that we raised a ton of money to help defray the massive costs for David's cancer treatments!
Posted by Mark Pino On Drums at 8:04 AM No comments:

Cloud Shepherd will play this Sunday! 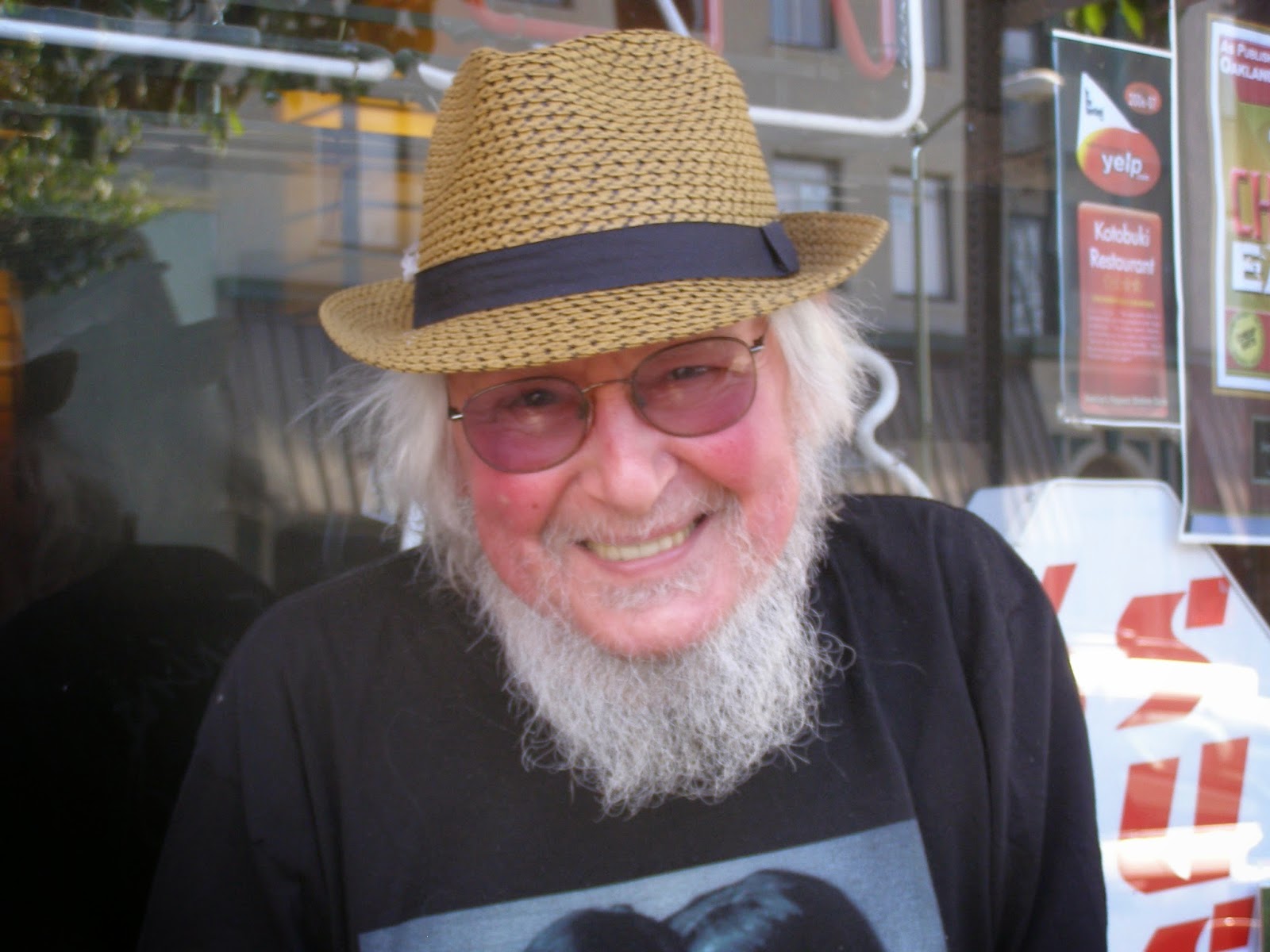 Cloud Shepherd is pleased to be playing a benefit show/poetry reading for David Meltzer this Sunday, 11/9/14, at Bird & Beckett Books in San Francisco!
Bird & Beckett is located at:
653 Chenery St.
SF CA 94131
The show starts at 7:30 PM. All proceeds go to David Meltzer's medical bill payments. A fun show for a very good guy's benefit!
Posted by Mark Pino On Drums at 7:24 AM No comments: 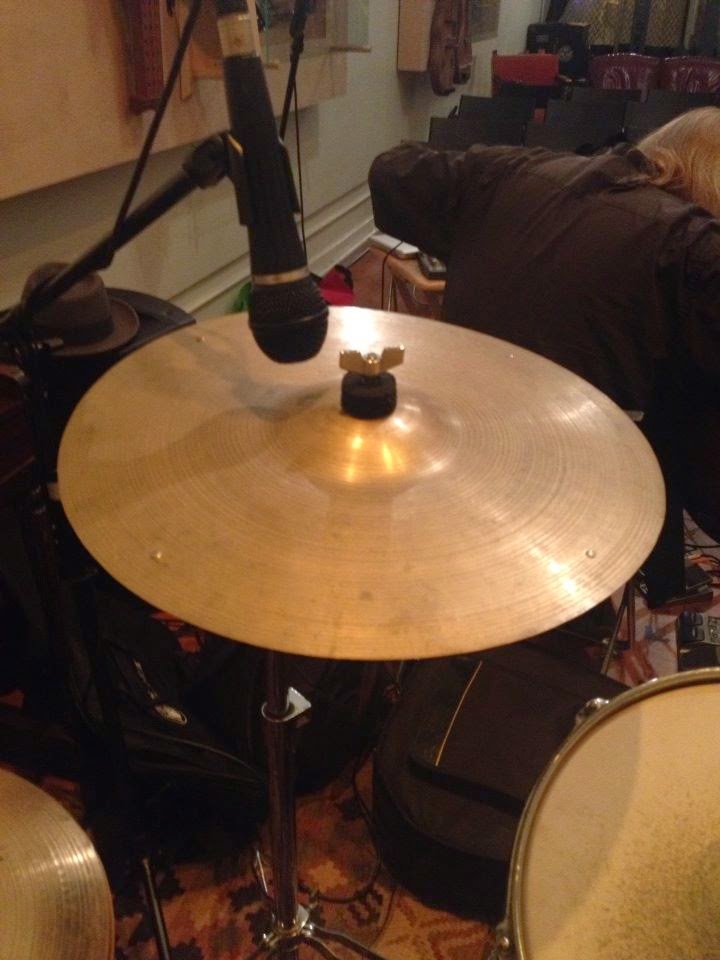 I was definitely stoked to be playing in the Grand Lake District of Oakland last night! So many years after living in that area, it felt like a cool homecoming.
Cool also to be playing with Mika Pontecorvo's Bridge of Crows! I very much liked being part of the eclectic mixture of personnel therein.
We played two pieces, both improvisations from sketches. The first utilized close mic'ing of cymbals and rocks, along with sax, clarinet, flute, guitar, bass, and electronics. Our goal was to simply let the sounds unfold within the envelope of electronic treatments created by Mika. It felt good! The second was a cover of James Blood Ulmer's Are You Glad To Be In America, Mika's statement about his feelings on current events. I've been an Ulmer fan for years, so playing that tune was a gas, even though I only knew we were doing it about five minutes into it!
Many thanks to Rob Pumpelly for letting me use his great, funky kit as a backline! His band with Karl Evangelista, Tracy Hui, and Nick Obando slayed!
Studio Grand and Oakland Freedom Jazz Society-do check them both out!

Below: Mika and Eli, father and son improv team 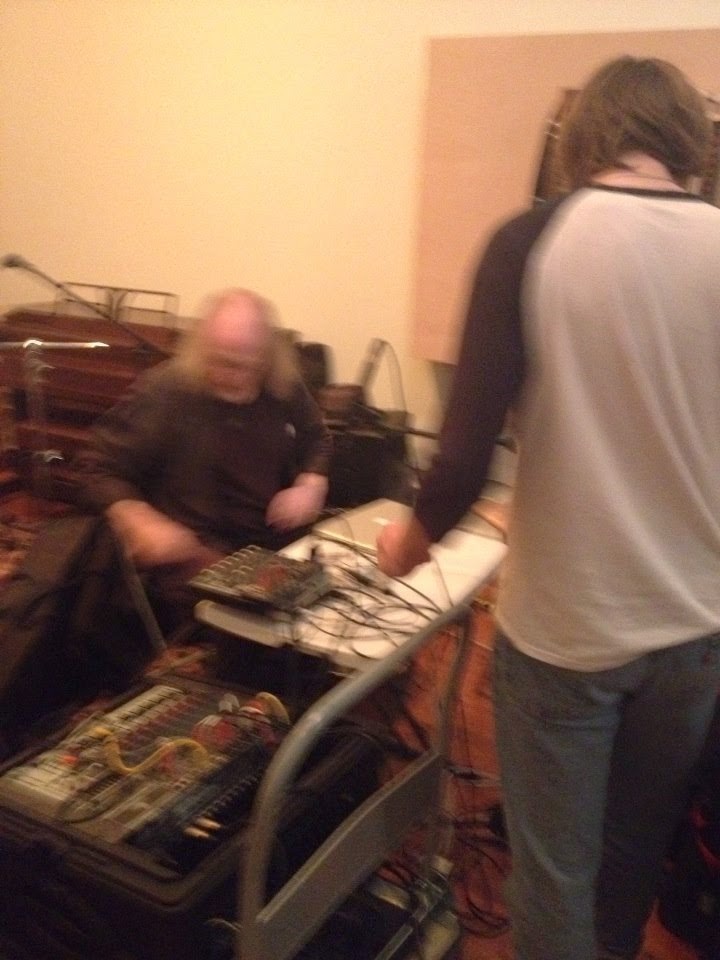 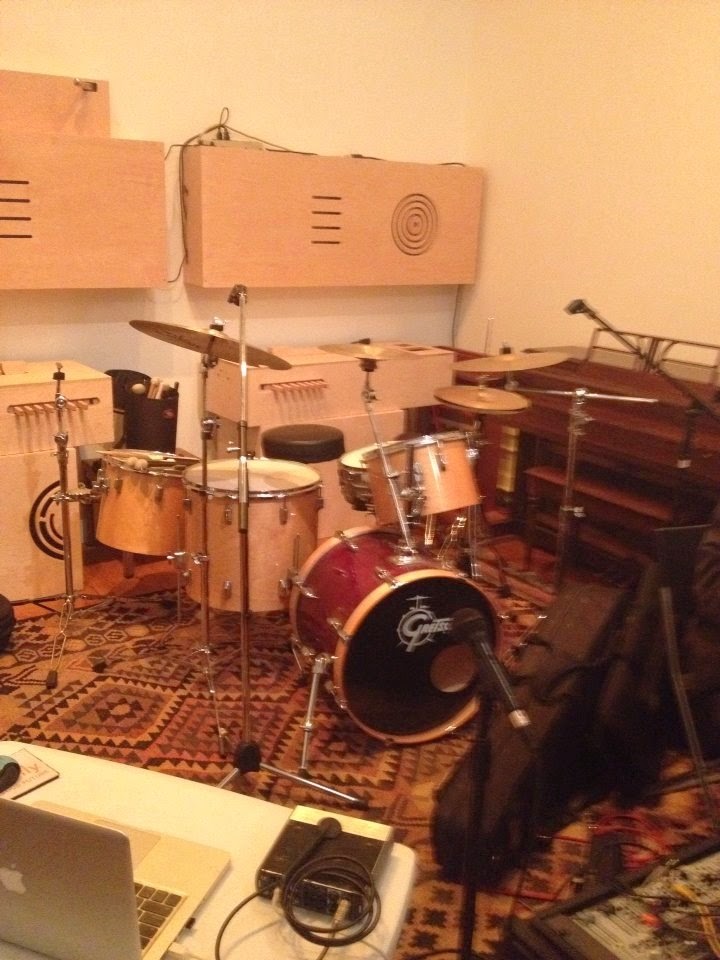 Above: funky old kit!
Below: Bridge of Crows full; photo by Russell Ward. Thanks, Russell! 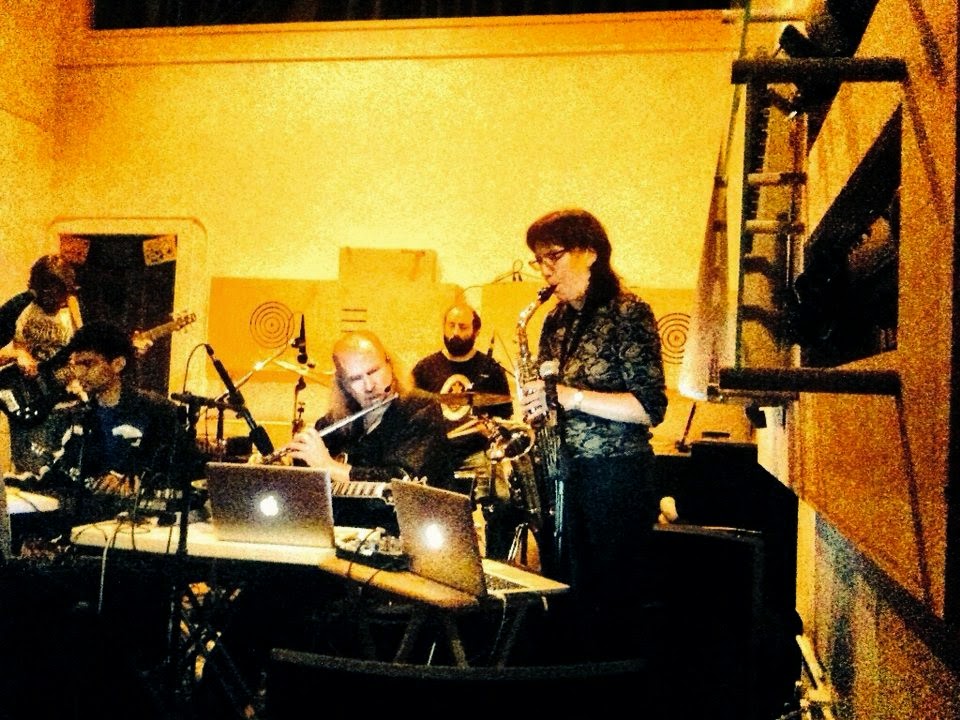 Many thanks to Mika, Kersti, Greg, and Eli of Bridge of Crows!
Posted by Mark Pino On Drums at 6:13 AM No comments:

I will play with Bridge of Crows this Wednesday! 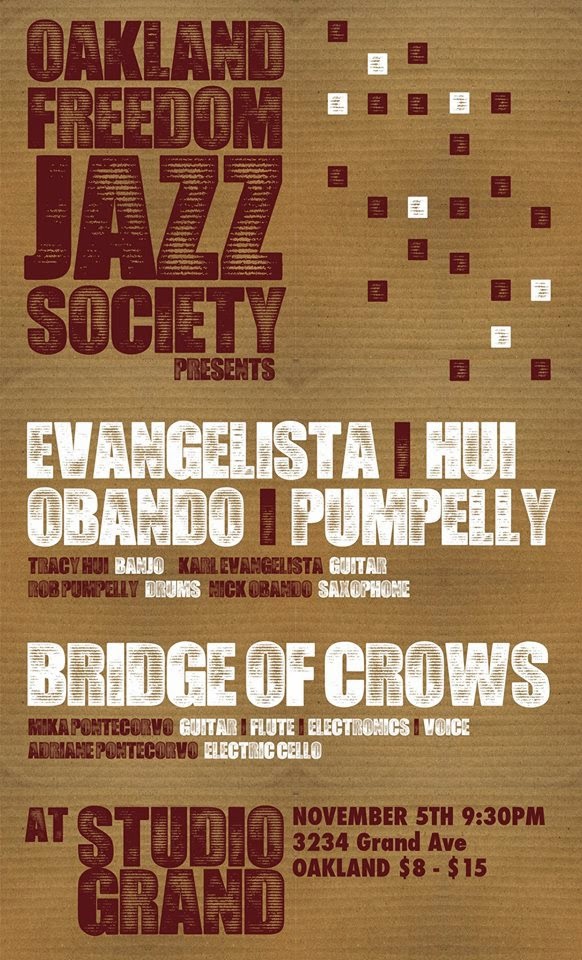 I'm happy and looking forward to be playing with Bridge of Crows this Wednesday, 11/5 in Oakland!
The show will be at Studio Grand, 3235 Grand Ave. We will be opening for the Evangelista/Hui/Obando/Pumpelly Quartet, and the admission fee will be $8-15 sliding. Bridge of Crows will play at 9:30 PM.
Oakland/East Bay pals, come on out! It'll be fun!
Posted by Mark Pino On Drums at 8:35 AM No comments: