I am sitting at this keyboard, battling a nasty cold. In terms of gig schedule, I guess that it's good timing as I have nothing on the calendar for a few weeks. It's almost as if my body knew that. Don't worry as you read this, probably ain't contagious anymore, just sneezing all over my keyboard. 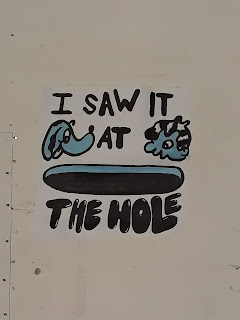 Surplus 1980-The Hole, Oakland CA; 4/19/19
This show was supposed to happen at the Dildo Factory, but due to some issues with the landlord there, it was moved over to The Hole. Literally located in a garage in West Oakland, The Hole is functioning as a very d.i.y. venue for local and touring bands. Pretty cool space, too, with a good back line drum set, sweet yard in the back, and a general lack of pomp. It's a down to earth place that sells La Croix and joints! Very cool. Surplus 1980 played first on a three band bill. Our set went pretty well as I recall, maybe a few clams here and there. I was pretty jittery, and bummed that there were no vocal monitors, but The Hole just isn't that kind of place, so that's to be accepted. Our energy seemed good. Watching the other bands, Pieces and Spring Breeding, was really fun. Awesome youthful energy and creativity from both. A fun night in Oakland!

Below: nifty little kit at The Hole; Surplus 1980 setting up d.i.y. style 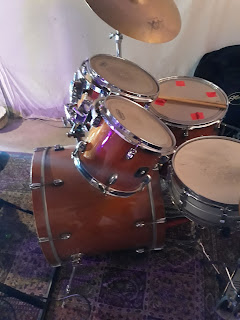 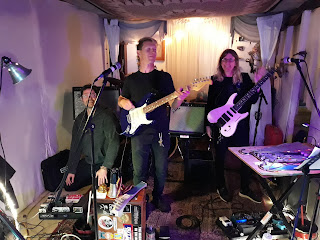 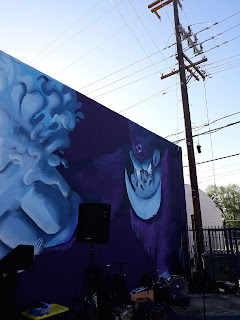 Surplus 1980-King Cong Brewery, Sacramento CA; 4/20/19
It had been almost four years since Surplus 1980 had played in Sacramento before last Saturday. Odd, really. It seems as if we'd have had an easier time getting a least one show there in that space of time.
When we got to King Cong, I was a bit disconcerted to see that the bands play outside. That was unexpected. Outside shows can be tough for hearing the stage mix. Gentleman Surfer played first, and as usual were incredible. Jon Bafus: it's like watching 1974 Bill Bruford in action. What a great drummer. Surplus hit next. Moe! was able to use Jon's kit for a Pigeon Obstacle Course start, very rare these days as his tendonitis is still there. From there we played about five more songs. Some renditions were tight, others were pretty sloppy at times. I could not hear any of the vocals and none of the guitars, either. Again, no monitors for the stage. It seems like King Cong could afford such additions to their stage set up. Hopefully, they'll do that eventually. Not our best set, but we got some applause and friendly feedback.


Below: Surplus hitting at King Cong Brewery (photo by and courtesy of Gabriel Sanford, thanks Gabriel!) 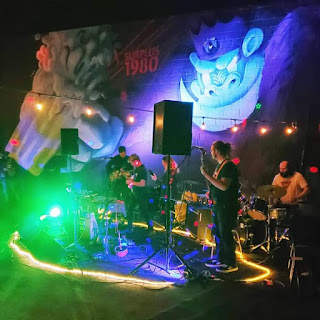 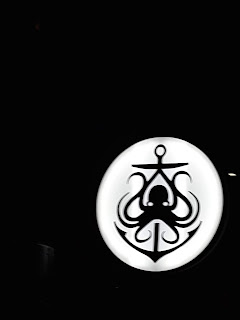 M-KASM Ensemble-Octopus Literary Salon, Oakland CA; 4/23/19
Max Nordile reached out to me in February to see if I'd like to be part of one of his Music For People bills at the Octopus Literary Salon. Seeing as that M-KAT Ensemble had not played out in a while, I figured that it was a good opportunity for us. Thomas could not join us for the evening, so I asked Shawn Miller to fill in. Happily, he obliged us. I was happy to use my "little kit". It worked really well within the small space of Octopus, too. M-KASM (changed for lack of Thomas), were scheduled to play last, but we ended up playing second, for a short set of only 22 minutes roughly. For a late starting, four band bill on a Tuesday night, this seemed fine. Shawn started us off really quickly, and we proceeded to play what felt like a really good, interactive set of improvised music. I certainly felt connected to everyone. It felt like a wonderful meditation to me. What a great way to end this short run of shows!

Below: the "little kit" on the floor of the Octopus Literary Salon; Shawn and Andrew setting up 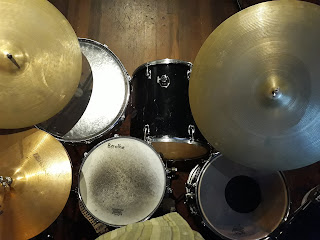 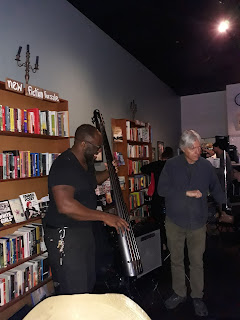 Below: audio from 4/23 at Archive.org


Alright, I'm off to nurse my sore throat and runny nose some more. Surplus 1980 will be playing a really neat show in early May, and Crow Crash Radio will return in mid May! Cough, cough, cough....

Posted by Mark Pino On Drums at 9:46 AM No comments: 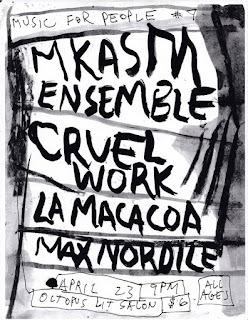 M-KAT Ensemble will be M-KASM Ensemble this Tuesday evening in Oakland! Thomas can't join us, so we'll have Shawn Miller filling in for him on bass.

Looks like a good bill and I'm happy to be part of it! 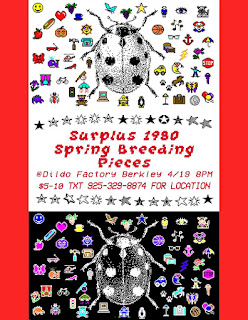 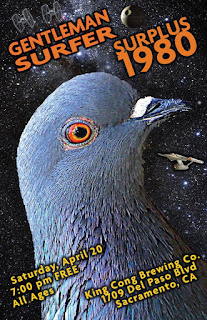 New Surplus 1980 7" records will be available at both of these shows!

Posted by Mark Pino On Drums at 5:48 AM No comments: 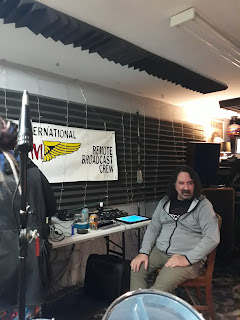 Yesterday evening's proceedings at Chakra Chimp Research Kitchens was sort of a do-over for Dead City Shaman. Heavy rains back in January had made it impossible for Jack Hertz to get over the Bay Bridge. No such problems for UB Radio Salon #587; it was a stone beautiful day all around the Bay. Despite the sunny weather, I was feeling pretty glum, wrestling with some of the typical dark emotions that can beset a person involved in creative endeavors. Not to get too specific, but things have seemed a tad bit pointless lately. Hopefully, that will pass.
As for the Dead City Shaman's set with Members of Big City Orchestra, things went really nicely. Jack, Nina, Das, and me all utilized relatively small rigs, which was conducive to cool interactions. We got into some satisfying sonic territories throughout our one and half hours of playing. Especially cool for me was a passage that featured sampled Tibetan chanting paired with metallic percussion and sizzling synth tones. Seriously goose bump invoking. I also had a great time playing some of Das and Nina's personal percussive gear. Going to Chakra Chimp is like being a kid in a candy store for a percussion player. Such fun!
All in all, a great, happy, and much needed mood lifting time was had by this half of Dead City Shaman. Hopefully Jack, Nina, and Das enjoyed it as much as I did. Thanks to them!

Below: some minimal gear 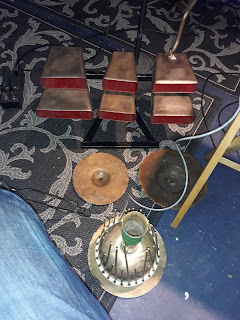 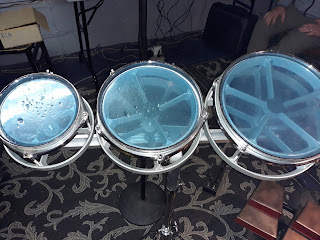 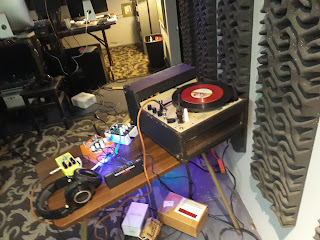 Above: Das's minimal rig sounded dope
Below: audio at Archive.org!

Posted by Mark Pino On Drums at 6:22 PM No comments: 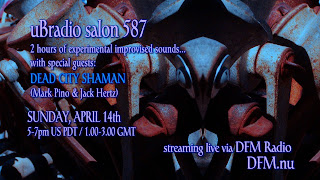 Jack Hertz and I will be joining forces with Das and Nina at Chakra Chimp Research Kitchens this Sunday, 4/14 for a Dead City Shaman set!
5 PM Pacific Time!
Listen here:
http://dfm.nu/

I'm still trying to decide what/how to play, but it will be fun!

Posted by Mark Pino On Drums at 5:21 PM No comments: