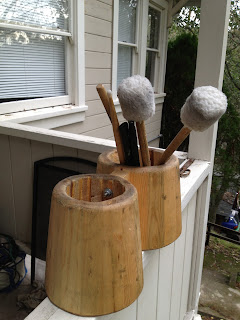 Today Crow Crash Radio convened at Daniel Humphrey's Montclair, CA studio to record some demos. I think that we got about four or five usable takes of tracks. Mixing will reveal that answer to that question.
The process felt really comfortable to me, and it was fun to get wacky and weird with my pals Brian Strang and Andrew Joron. 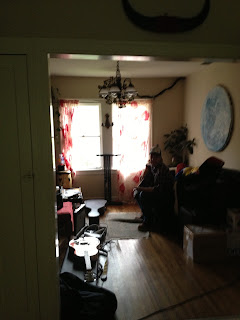 Above: Brian tunes up
Below: Guitars 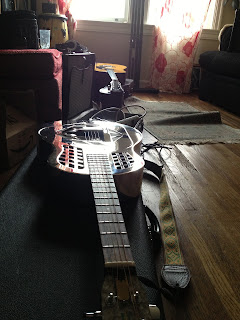 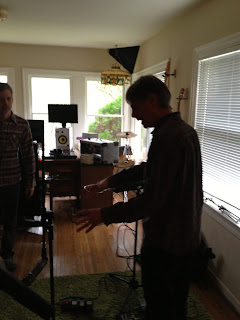 Above: Andrew demonstrates his technique for Daniel
Below: Bongos! 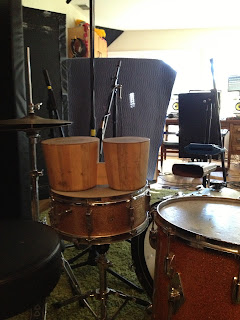 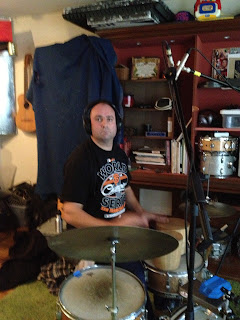 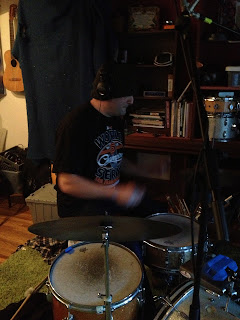 Stay tuned to see how our recordings see the light of day! 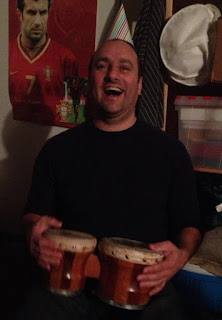 Last night the men of Cloud Shepherd convened at Crow Crash Radio leader Brian Strang's house for a Christmas party/Solstice jam. Howling basement psyche/folk ensued. Melissa snapped this "candid" photo. Brian's neighbor Peter also participated. Whatever holiday it is that you celebrate at this time, have a great one. Joy and music to the world. We need them, now and always. 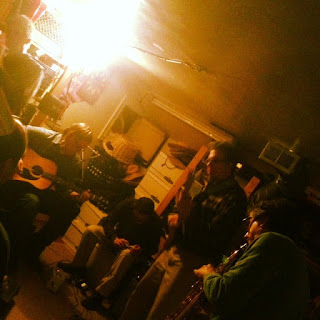 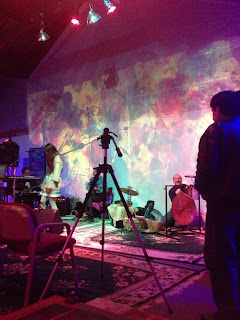 This gig was sort of last minute for me, as I had been unable to attend the rehearsals, due to illness. Janina sent me an email a few days before the gig, and suggested that we convene a few hours before the gig, work up arrangements of some tunes, and go for it. I think Janina is great, so, of course, I agreed. 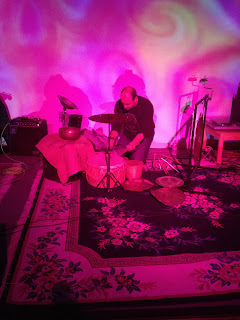 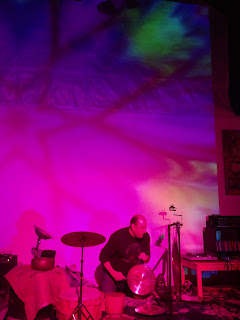 It was a fun show. The band, consisting of Brian Lucas on guitar, Michael Lowe-Grandi on guitar, along with myself on Cloud Kit, played somewhat quiet, trance music behind Janina's esoteric incantatory songs. 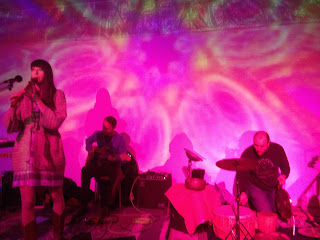 Above: Janina invokes, Michael concentrates
Below: Guitarists in repose 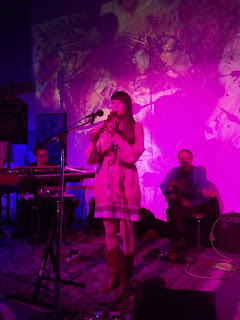 It was great fun to jam under the liquid light display, and to see old friends.
Thanks to Melissa for taking the pics, and to Janina for letting me participate! 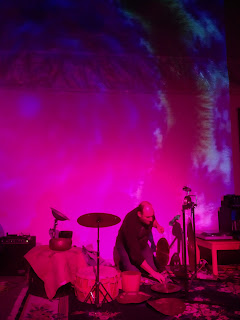 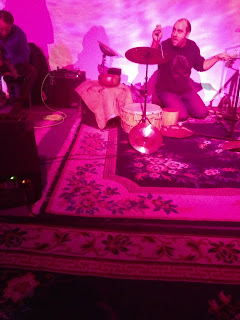 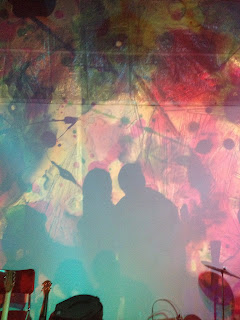 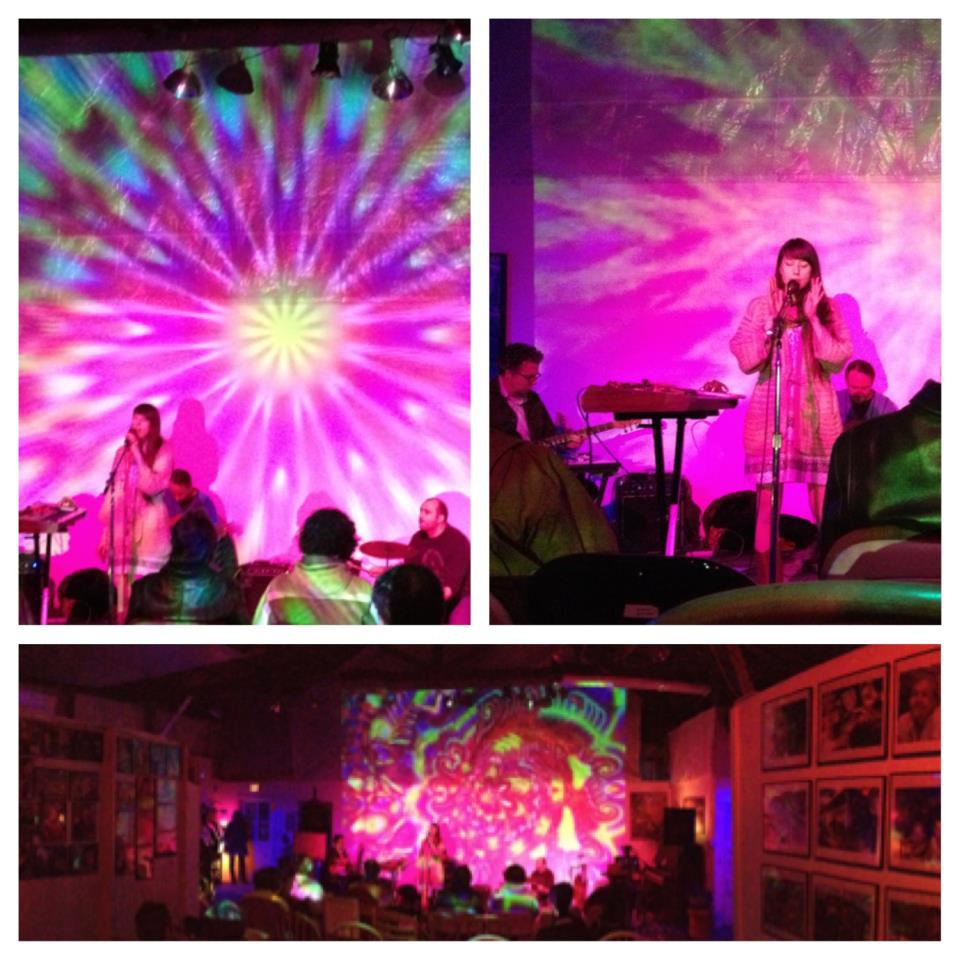 Posted by Mark Pino On Drums at 9:48 AM No comments: I guess the lesson for me from this gig was: soldier on. Despite feeling ill from a cold that I just can't shake, and getting a bit perturbed by the street noise from Broadway, along with the blasts of cold air that would hit me (the drums were directly parallel to the front door), the audio evidence suggests that Crow Crash Radio played fine. We were pretty loose, ragged but right, I guess. That fits our dynamic, though. People seemed to enjoy the tunes, too. Yeah, soldier on!
Many thanks to Chris, the Awaken Cafe sound tech, for going the extra mile. 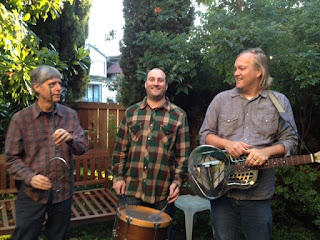 Crow Crash Radio will be bringing our Space-a-billy Blues to Awaken Cafe in Oakland next Wednesday, 12/12/12!
Awaken Cafe is located at 1429 Broadway in downtown Oakland. Crow Crash plays two sets, starting at 7PM. See you there!

Posted by Mark Pino On Drums at 9:23 PM No comments: