I'll be playing with Surplus 1980 and Feral Luggage this Saturday and Monday! 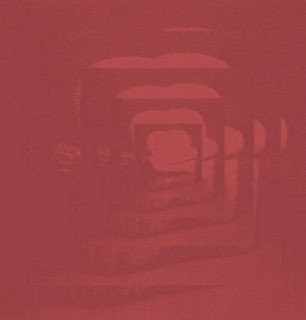 Another busy few weeks of performance made the end of July pretty interesting, with aesthetic jumps and emotional ups and downs aplenty. Here's the lowdown. 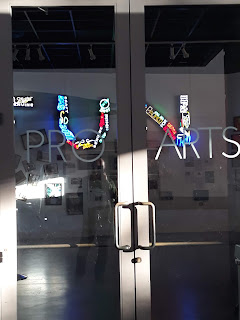 Broken Whole-Pro Arts, Oakland; 7/15/19
For this show, Broken Whole was augmented by the great Thomas Dimuzio, who brought a small but very effective set of synth patches to play. We got into a really cool, spacious set, with everyone really taking their time and choosing their spots wisely. As always, Tim Orr and I had some really good, interactive playing, while Mika processed the sounds with his "slicer dicer" program. Things unfolded nice and slow. Thomas's sounds really boosted the music, which got VERY abstract. I have a decent recording of it, hopefully it gets out onto the web in some way. 30 minutes of heavy experimentation and meditative bliss, played to a receptive audience in Oakland. Yes!

Below: Broken Whole's gear, waiting for the slowness.... 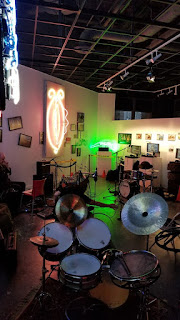 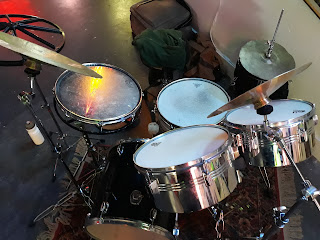 Above: my trash kit, such a weird, fun sound 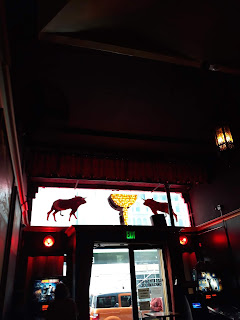 Surplus 1980-Golden Bull, Oakland; 7/18/19
Here's where the emotional "down" really set in. This show was Surplus 1980's record release show. We have a new CD/vinyl recording out, which, in my opinion, is really damn good. We tried to promote the show well, got really good acts to play, but the turnout was really lackluster and disappointing. Never the less, we played our set, albeit somewhat truncated for later time and lack of audience. I felt like I played well. Hell, I felt like everyone played well, with Moe! kicking ass on second drum set, but it would be dishonest to say that the hurt feelings didn't make for a somewhat grim mood. The back line kit, supplied by Eye-O drummer Kevin Woodruff were a delight to play. Hopefully Surplus 1980 will find some kind of way to rebound from this emotional blow.

Below: a nice set of drums 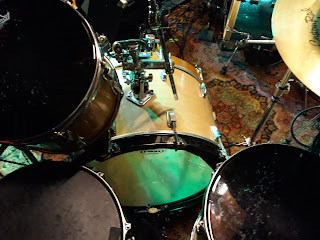 Below: video by Bill Russell, THANKS Bill!!!! 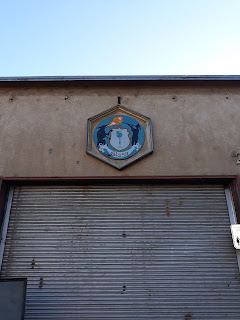 Below: some of Failure Cock's gear 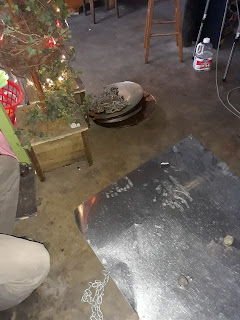 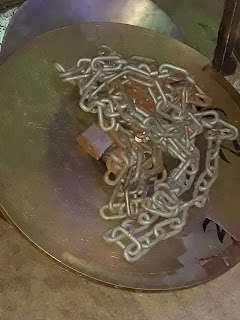 Posted by Mark Pino On Drums at 9:22 AM No comments: 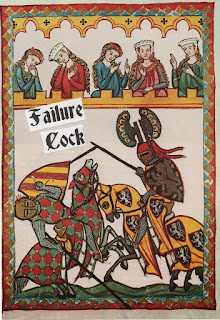 It's been a long time since Failure Cock played a gig, and that's being rectified this Sunday!
Details:

I'm hitting Oakland a couple of times next week! 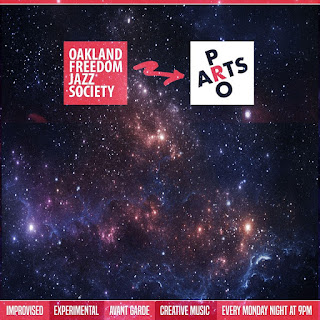 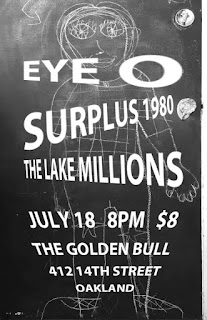 These are both going to be great!

Posted by Mark Pino On Drums at 5:57 PM No comments: 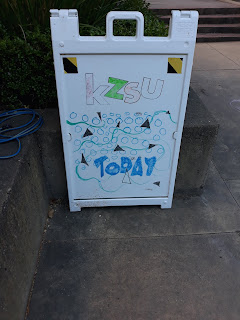 When I pulled into Stanford yesterday evening, I feared the worst as regards traffic. There were a few events happening on the campus, and it seemed as though finding a parking spot would be a total nightmare. Happy to say that I just decided to let things happen, to not stress on outcomes. This decision served me well as I was able to just relax and find what turned out to be a pretty good spot, close by to KZSU.
Not stressing on outcomes also seemed to serve well for the music that Broken Whole played, at least from my chair. Mika Pontecorvo put together a score that definitely leaned towards a less is more approach, and I felt as though I was able to, for the most part, stick with those vibes, in large part by just letting things happen, and playing only when it seemed the right time to do so. Silence was often observed. Along with our guest, cellist Colleen Kelly T, Tim Orr, Mika, and I started pretty mellow and stayed that way, floating from passage to passage. Quite abstract. It felt to me at times like some futuristic Gagaku orchestra, slowly unwinding our sounds. As always, I felt very strong simpatico with Tim. It's such a pleasure to share drum dialogue with Mr. Orr.
Two pieces in total, one longer, one shorter. A fine time in Studio A of KZSU, and many thanks to their groovy staff!

Below: Colleen and Mika setting up; my trash drum kit for Broken Whole gigs 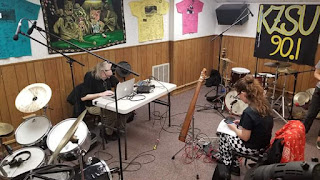 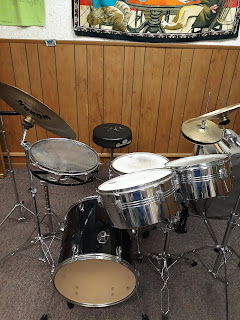 Posted by Mark Pino On Drums at 5:51 PM No comments:

Broken Whole this Wednesday on KZSU! 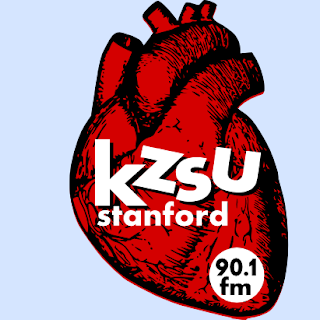 Mika Pontecorvo, Timothy Orr, and me will assemble as Broken Whole this Wednesday, 7/10, for an appearance on KZSU Stanford!

Tune if from the comfort of your computer or device, wherever you may be!

I'm totally beat after last night's show and subsequent sleep deprived work day, so this will likely be short..... 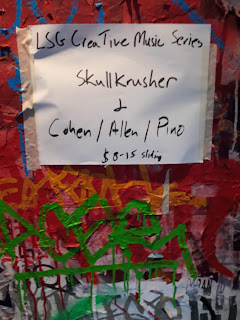 Allen/Cohen/Pino Trio-Luggage Store Gallery, SF; 6/27/19
As usual, I was damned chuffed to get a chance to play with Josh Allen. I'm always learning from Josh's no b.s. approach to playing and presentation. Adding learned guitarist Alex Cohen to the mix just increased my stoke-age! After a killer set from Philip Everett and his Skullcrusher project, the three of us stepped on and proceeded to improvise. It was nice to be playing my "dream kit"; this kit that I used has the dimensions of drums and cymbals that I've always desired. It was definitely a high energy time, with good intensity and interaction. I never felt lost or insecure during our roughly forty minutes duration, probably a good sign of confidence. It was also really great to see some friends, along with a some foot traffic attendees. The room may have been a bit echo-ey from our playing, but feedback was generally positive. One guy walked up and said that we sounded like "Dizzy Gillespie crossed with Slayer"! Not bad!

Below: my lovely kit; Allen/Cohen/Pino Trio backlit (photo by and courtesy of Jessica (rhytmicallyperfect @ Instagram, thanks, Jessica!) 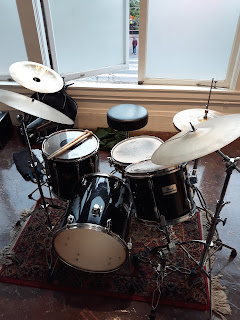 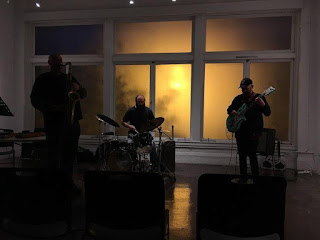 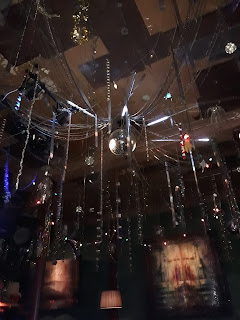 Crow Crash Radio-Make Out Room, SF; 7/1/19
July started off cool with Crow Crash Radio in the chilly evening air of the Mission. As usual, I had conversations about how great it is that the Make Out Room survives in the face of so much change in the Mission. Crow Crash played third, after great sounds from zen Dave Mihaly and the Bill Orcutt Bruce Ackley Duo. We had scripted out a pretty much continuously flowing set, with tuning breaks to be covered by Andrew and I doing drums/theremin duets. Things got pretty loopy pretty quickly, which was fine. It seemed as though everything flowed really well, with lots of dynamics and paces hit. Probably the most psychedelic that Crow Crash Radio has been all year. We were able to let things all hang out. Playing Mihaly's very weathered and lovely old kit, I had one of those "close my eyes and just play" kind of nights. The sort of experiences that keep one coming back to the odd pursuit of playing music in the Underground.

Below: drums with "weathered magic" 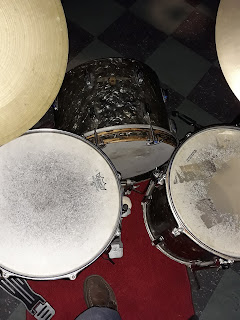 Above: video shot by Elisa Brasil, thanks, Elisa!
.....and sweet. Interesting gigs with Mika Pontecorvo coming up in a week or so.

Posted by Mark Pino On Drums at 7:05 PM No comments: