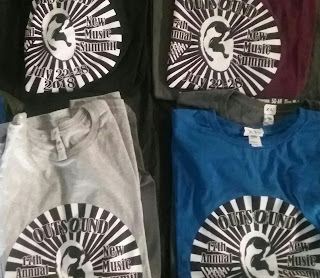 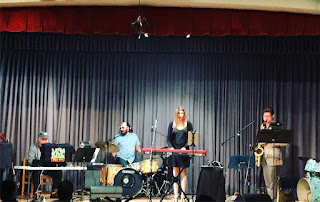 Posted by Mark Pino On Drums at 9:49 AM No comments:

Posted by Mark Pino On Drums at 9:20 AM No comments:

Very proud of this music! Check it!
Posted by Mark Pino On Drums at 11:19 PM No comments:

CDP will be playing this Friday as part of the 17th Annual Outsound New Music Summit! 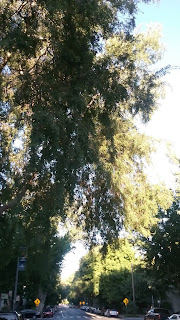 Playing music of any sort with Josh Allen has been a literally decades long aspiration of mine. I first became aware of him in the mid-aughts, having seen and heard his incredible tenor saxophone playing at various BART stations around Oakland along with venues such as Stork Club and 21 Grand. Josh has always blown me away. Such powerful and sublime sounds, holy moly. At some point last year, we got together and played, and have done so intermittently from that point onward. A few months ago, we talked about maybe setting up a gig, and I promptly contacted Lob in Sacramento to see about getting a gig at Luna's Cafe for the Nebraska Mondays series. Thankfully, Lob set us up.
We managed to get a nice number of rehearsals in, which is very important. Josh's attitude about rehearsing, essentially "practice your instrument or shut up", is VERY inspiring to me, and I am very happy to get in line with it. This aspect is so important, and it's great to be reminded of that.
After a relaxed trip up I-80, we hit Luna's in plenty of time, and were able to set up and get accommodated at a good pace. Our 45 minute set started off with a pretty energetic pace, and I felt as though I was able to get over the jitters of playing out pretty quickly. Things stayed up energy-wise, but we also managed to get some subtle interplay going. I seemed to be focused on playing what felt like little micro pieces within the longer improvised arcs, with lots of quick stops and syncopation with Josh's melodic and harmonic lines. Especially enjoyable and inspiring were the parts during which brushes and mallets fused with Josh's sounds. The whole set had what to me felt like a very dynamic movement: we played together within the improvised matrices that we set up. What a fantastic feeling!
The people in attendance gave really positive feedback, and seemed pretty inspired by our sounds. Who could ask for more!
A few days later, and I'm still buzzing. Many thanks to Josh for taking the time to make some music with me, and thanks to Lob and Art Luna for the booking. Hopefully more of these duo shows with Mr. Allen will be forthcoming. 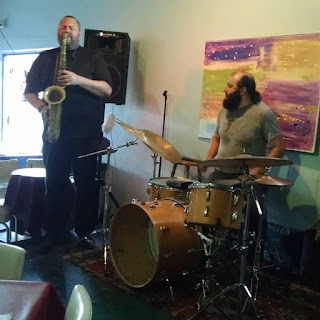 Posted by Mark Pino On Drums at 5:53 PM No comments:

Duo with Josh Allen this Monday in Sacramento! 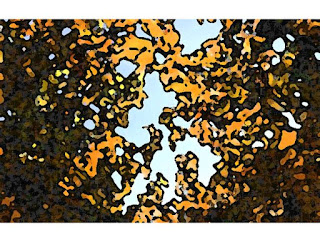 I know the weather will be hot, and the sounds will be, too.

Posted by Mark Pino On Drums at 7:07 AM No comments:

Many thanks to Jack Hertz for initiating and continuing this project with me!
Posted by Mark Pino On Drums at 5:51 PM No comments:

As a really pleasurable weekend of muse chasing winds down, I'm already feeling a bit nostalgic. Just have to remember to take my time as I write about it! 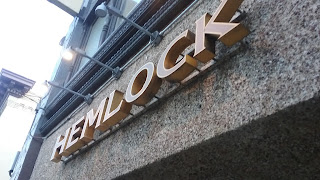 Crow Crash Radio-Hemlock Tavern, SF CA; 7/6/18
A bizarrely fast Friday evening trip across the Bay Bridge had Andrew Joron and I meeting up with Brian Strang at Hemlock Tavern well before our set time. Seeing as that Rabbles drummer Dave had volunteered his beautiful Pearl drum set as a back line, I had minimal gear to schlep. So, after a bit of a wait, Crow Crash Radio hit to open the show. Things felt good pretty much right away, and stayed that way for the duration. We strung about three opening pieces together, using quieter interludes to connect our riffs. Brian has added some cool pedals to his set up, getting nice repeater sounds and electronic squalls along with his tasteful guitar playing. Andrew and I did a brief Cosmists-style duet to start the latter part of our thirty minute set; I even got in a few solo drum passages! Stoked. A set of slower, Psych-colored feels, and a fun way to start off a fun night of music, in which all of the bands had similar approaches but diverse sounds. I was happy to be there, especially on account of seeing so many friends. 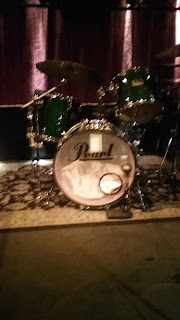 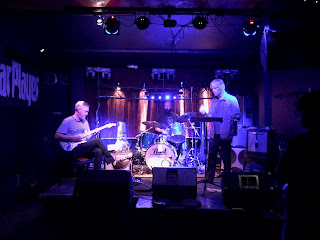 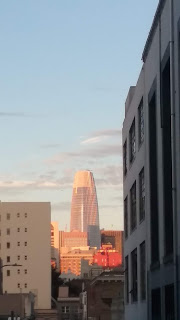 Above: the tallest building in SF lit by the sunset. I guess it's OK
Below: Crow Crash Radio's set from Hemlock Tavern! 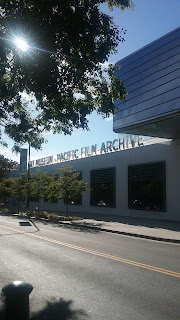 Aural Monsoon-BAMPFA, Berkeley CA; 7/7/18
A few hours later I found myself being picked up by Andrew Joron, with Will Alexander in tow, for our trio set at Berkeley Arts Museum's Pacific Film Archive. The set was added on to a solo reading from Will. If you're not familiar with his work, get familiar with it. His writing is stunning, and his live delivery is as well. Very impactful. Will has become more and more obsessed with playing piano, and as such had requested that he be allowed to bring Aural Monsoon in to play a bit. It's a testament to the respect that he commands that BAMPFA rounded up a piano in order for us to do so. We only had about fifteen minutes in which to play, but I felt as though we made the most of the time. I brought a visual score, dubbed "Valleys and Volcanoes" after a long talk with Will back in May. This piece was taped to the floor of the very cool auditorium and used a cue, with the loose instruction being that we work upward from lower tones and into higher tones at a slow pace. We seemed to follow this concept pretty well. To start, I played the bass drum taiko-style, from a semi-seated position and using mallets to get low rumbles. Andrew got great, low sounds from his theremin, as Will did with the piano. At times, it was tough for me to follow the piano's sounds, as its sounding board was turned away from me, but I felt as though I was able to play interactively with Will for the most part; this is important in Aural Monsoon, as the group's sound is all about call and response from attentive listening. I would have liked to have played longer! Ah well.

Below: Aural Monsoon gear from above; Valleys and Volcanoes score 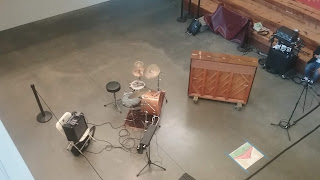 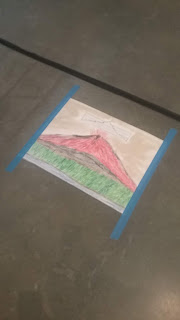 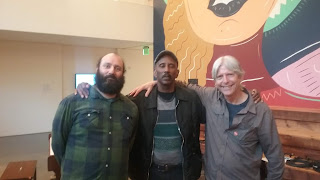 Above: a happy trio!

Much more music scheduled for this month!

I have lucked into a few shows in early July! 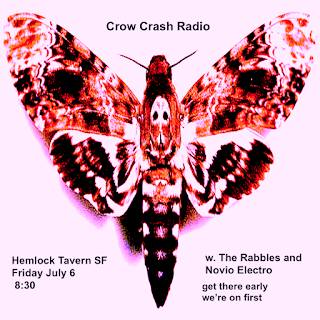 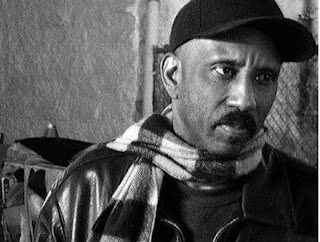 A fine weekend of sound awaits!

Posted by Mark Pino On Drums at 6:07 AM No comments: