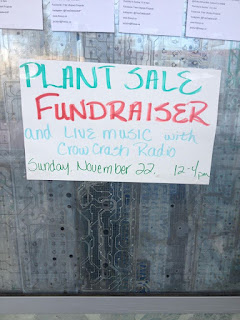 On occasion, one just feels that a show is going to be fun and good. Today's Crow Crash Radio had that feeling for me, right out of the gate. We started with a loose, improvised feel, and managed to maintain that fine looseness throughout the afternoon at Free Oakland UP!
We must have played for about two hours, total, and I had a blast for each and every minute of that time. Very Psychedelic! Alright! Compared to Crow Crash's last show in Oakland, this one was heavenly! Talking to Brian after the show, we realized that we stretched out so much that didn't even get to several of our usual tunes.
One listener remarked that our last piece, with its cowbell hits, reminded him of events during a trip to India. That made my day.
Many thanks to all friends that came, new friends that listened, and to anyone that donated to Free Oakland UP! What a nice, musical afternoon.

Below: Brian sets up, and today's drum set 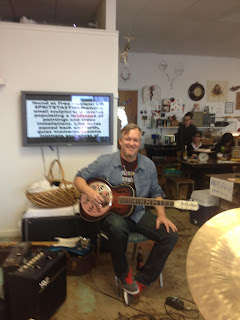 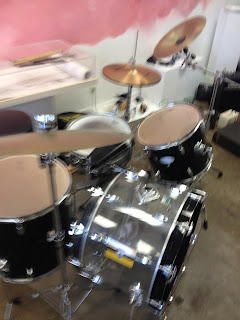 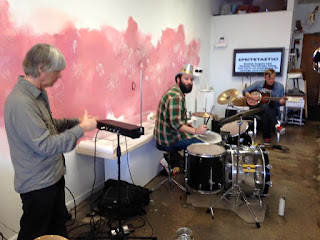 Crow Crash Radio will play in Oakland this Sunday! 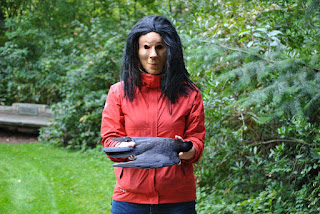 This Sunday, Crow Crash Radio will play at Free Oakland UP! This will be a benefit for a great "store" that basically gives it all away! Perfect for artists, teachers, scavengers, etc.!

Crow Crash will play from 12-3PM, probably at least four sets!
Come on over and hang out! Donations will be given to Free Oakland UP!

Posted by Mark Pino On Drums at 5:03 PM No comments: 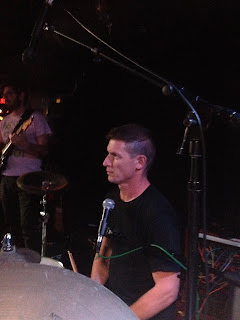 I guess that it can pretty much go without saying that when Moe! asked me if I'd be available to drum for Surplus 1980 for two shows with the Ex & Ken Vandermark, I was incredibly stoked. Playing on a bill with an awesome band that I have seen live more than a few times, and admire considerably, sounded like an amazing experience. Here's the lowdown... 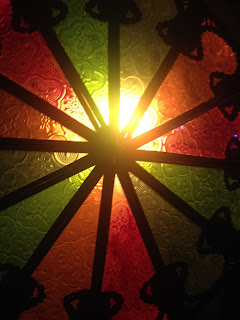 Surplus 1980-Bottom of the Hill, San Francisco, CA; 10/29/15
Many years ago, I had about five or six chances to play the Bottom of the Hill. My recollections of those experiences are colored by the fact that weird stuff always seemed to happen: either the band's set was sub-par, or some weird passive/aggressive bullshit from other bands' members would go down, or I'd do something too embarrassing; it always seemed like, for me, the Bottom of the Hill came with a "curse". Thoughts regarding this curse were definitely on my mind as I arrived on the evening of 10/29 for sound check.
Thankfully, I think that I may have beaten that particular one back. Surplus 1980's set seemed really tight and energetic to me. We managed to get through passable versions of recently written tunes, and the older tunes seemed to have benefited nicely from our recent West Coast tour. Things felt really great. We also had guests Kyle Bruckmann and Paul Costuros play with us on Failure of Commitment (Kyle only) and the Ex song Godgloeiendeteringklootzak on oboe and clarinet, respectively. They added some really great Free Jazz feels to these songs. Oh, yes!
All in all, this show exceeded expectations, and it was really neat to play for a pretty full house, and to see people that I used to know, along with people that I recognize from the San Francisco Punk Rock scene. Apogee Sound Club and the Ex & Ken Vandermark were both awesome, as well.
It was really fun to find myself skankin' to some old Ska at the end of the night, celebrating a victory over some lingering personal demons. Victory at the Bottom of the Hill!

Below: Surplus 1980 rocks out at the Bottom of the Hill (photo courtesy of Amanda Chaudhary at catsynth.com; thanks, Amanda!) 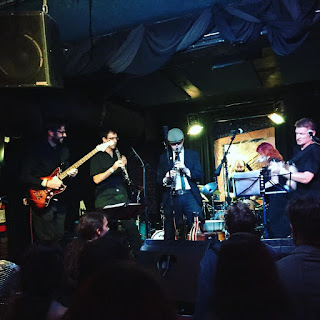 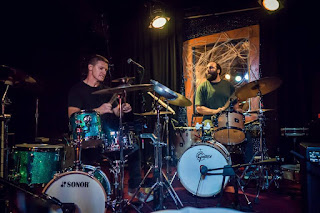 Above: Moe! and Mark, double drummin' during Pigeon Obstacle Course (photo courtesy of Lenny Gonzalez at lennygonzalez.com, thanks, Lenny!) 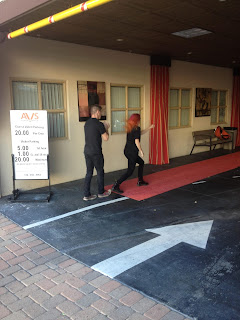 Surplus 1980-The Roxy Theater, Los Angeles, CA; 10/30/15
A few hours later, we found ourselves at Los Angeles' famous Roxy Theater. It's no stretch to say that everyone felt pretty tired, after a late previous night and an early call in order to get down to L.A. in time for load in/sound check. That fatigue seemed to have somewhat of an effect on our collective mental states: everyone seemed a bit scattered and hazy. Or, perhaps it was just nerves due to playing at a renowned venue?
Our set in Los Angeles definitely had a few more manic moments, a few more biffs, but, somehow, I really enjoyed the weirdness that these types of moments can bring to a performance. Far from being perfect, the set still had, for me, the added drama of a band walking on a bit of a tight rope. This kind of feel is equally fine to me as a more technically adept set, just a bit more harrowing as it's going down. I suspect that there were moments at the Roxy wherein Surplus 1980 had that sublime feel of a band not knowing exactly what was coming next. There were certainly times during the set when we overcame those obstacles in a good way. Just sayin'. A favorite moment for me was had during Pigeon Obstacle Course, when bassist Steve Lew took a really cool solo, and the drums were quiet enough to allow him to be heard. Cool.

Below: Surplus 1980 at the Roxy Theater in Los Angeles (photo by Fernando Veraza, thanks, Fernando!) 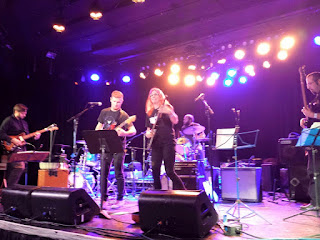 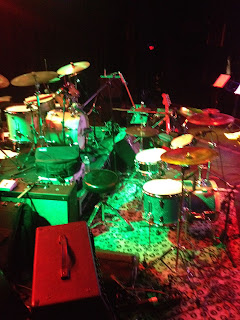 Above: Drums and guitars at the Roxy Theater
Below: Terrie Ex's guitar since 1979! 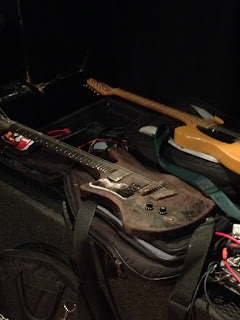 All told, the Surplus 1980 shows of 10/29 and 10/30 2015 were a real good time. It was quite a cool feeling to share some bills with the Ex & Ken Vandermark, along with that many more chances to play Moe!'s music. I'm quite enamored with it, for sure.
Many thanks to Moe!, Mel, Bill, and Steve for playing with me, and to Tom Scandura being so cool as I have filled in for him in in the band. 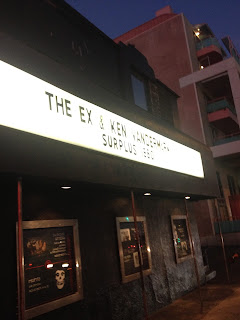 Posted by Mark Pino On Drums at 6:13 AM No comments: