Man, what a great time I had in music last week!
I'm still blown away: deep improvisation, a great re-up of a band, and a sweet evening of playing within a a long-standing project. All of these dynamics made me very happy and musically fulfilled. A bit of the lowdown..... 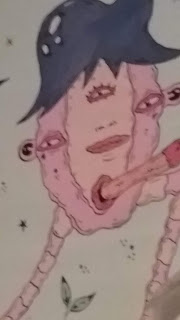 The Deconstruction of What You Know-Dildo Factory, Berkeley CA; 2/20/19
It was really exciting to get a nod from tenor sax player Josh Allen to fill in on drums for this set by The Deconstruction of What You Know. Josh is a powerful and soulful improviser who demands that those who play with him bring their top game. I've heard him play in a lot of different scenarios, and I'm an admirer. Being asked to share a stage with Josh is a thrill for me. Along with Allen, DOWYK consisted of Aaron Levin on drums, Nathan Corder on guitar, and myself on a newly set up "small Jazz kit". We dropped right into some very energetic playing right off of the bat and basically didn't let up until our set stopped. Things seemed really heavy to me as we all interacted. I wish that I'd have been able to hear the sax a bit more, but feel as though I did manage to keep dialog with it, along with the shredding guitar from Nathan and Aaron's rolling percussive skills. The Deconstruction of What You Know felt like rolling thunder to me at the Dildo Factory. Hopefully those in attendance were able to groove with our elemental onslaught.

Below: new kit I'm working on, and video! (Clip by Bill Russell, thanks Bill!) 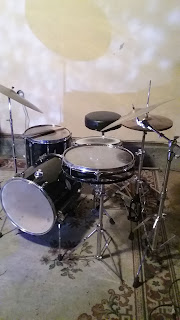 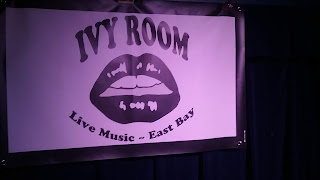 Surplus 1980-Ivy Room, Albany CA; 2/21/19
A couple of things that I know from 2/21's gig for Surplus 1980: The Ivy Room is HAPPENING, and Surplus 1980 can still rock a set. As for the former, it seems as though SF's lamented Hemlock Tavern has shifted its booking staff over to Albany, good news for bands local and touring. There appear to be tons of cool bills being set up at the corner of San Pablo and Solano. To the latter, it had been over a year since Surplus 1980 had been able to play out. All kinds of factors hindered the band in 2018, and hopefully they're all in the past now. I was especially happy for Moe!, because I know that he took the inactivity really hard. We played a good 45 or so minute set of solid Surplus sounds. I was stoked to play a new number, 261; I spent the past year memorizing the damn thing by myself, and it was great to take it out in public. It went pretty well, too. Also in the set was our epic 11 minute despair jam, Temporarily Present, with its strange passages, and the ever-popular "bundt pan song", Question After Ended Question. The band was pretty tight despite the jitters, and new full time bass player Tom Ferguson did really well. Hopefully the first of a few victories for Moe! in 2019. Expect vinyl from Surplus by year's end!

Below: Surplus 1980, back in action at long last, note the Surplus kit, used only for this band (photo by Jerry Blue, thanks Jerry!) 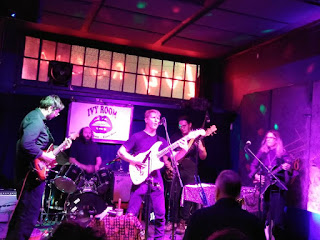 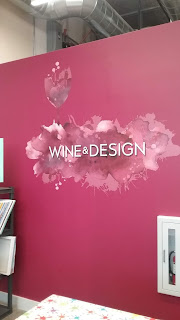 Crow Crash Radio-Wine and Design, Oakland CA; 2/23/19
My fun week of music ended on a nice, chill note with my old pals Crow Crash Radio at the very interesting spot called Wine and Design, near Jack London Square in Oakland. We were essentially the background group for this business, where people drink wine and paint (!) and its first anniversary.Congratulations to owner Tina for making this milestone, and thanks for letting us play! Our role gave us a lot of room in which to play with our structures, something that Crow Crash is always trying to do anyway. I felt absolutely no pressure to "perform", instead just had a blast floating in and out of our songs with Brian Strang and Andrew Joron. Brushes were my primary striking implement, and they proved to be good for the boom-ey, high ceiling of the space. We got to play for almost two hours, and it was quite lovely to do so while watching the afternoon turn to dusk as people mingled inside and shuffled past on the downtown Oakland sidewalk. Seriously blissful, and I wished we'd gotten some kind of recording. It'll have to live on as a delightful memory. 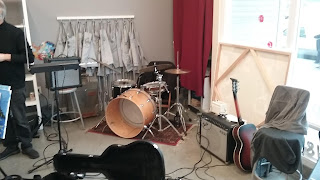 As usual, I feel so lucky to be involved with some really fine musical projects. Three shows in a week, all of them with their own unique vibe and aesthetic!
Stay tuned for a LONG list of upcoming shows from Cartoon Justice/Bridge of Crows. March will be busy.......

Posted by Mark Pino On Drums at 5:12 PM No comments:

Some live action this week! 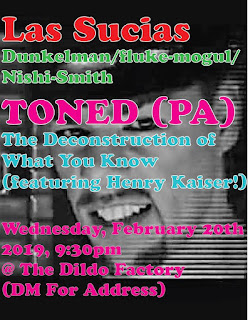 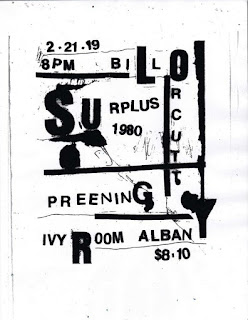 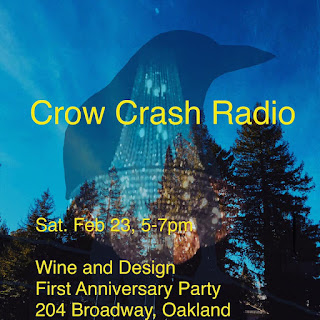 An exciting, musically varied week ahead!

Posted by Mark Pino On Drums at 9:10 AM No comments: