Scorpios was originally on a solo CD by George Earth. I heard it and immediately loved the surging synthesizer line. On a whim, I asked George if I could produce a new, more drum-heavy version of the tune. The idea was to build up a "wall of drums" around that heavy synth line.
George gave me the OK, and I spent a day in April of 2008 at John Axtell's SOMA, S.F. recording studio building up drum and percussion parts for the new version. The middle part, where all of the drums fade out, and an electronic whine leads them back in, was heavily inspired by Brian Eno and his Oblique Strategies.
http://soundcloud.com/mark-pino-on-drums/george-earth-scorpios
One result I had hoped for from this process was the re-invigoration of Shards, but with George being in L.A., and me in Oakland, that turned out to be untenable. 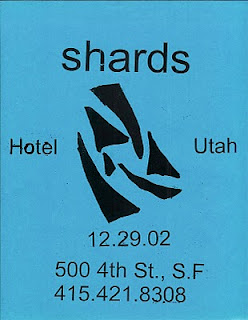 Above: Flyer for first Shards gig. I love the graphic that I designed. It was inspired by Magma's logo.