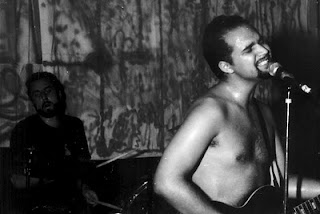 Lithium Milkshake was born out of a late night conversation between Justin Martin and I, which took place on Mowry Ave. in Fremont, CA, in the spring of 1990.  I was out on a late night bike ride, and saw Justin, with his characteristic long-armed amble, heading east toward Fremont's main drag, imaginatively named Fremont Blvd. I recognized him from Ohlone College, and knew that he was locally renowned as a gifted musician. I pulled over and introduced myself, and we spent a few hours talking about bands we liked, bands we didn't like, and the possibility of starting a band of our own.
Bands that approached their music making from an angle of Funk-Rock were all the rage at the time, but Justin and I wanted a lot more Rock and a hell of a lot less Funk in our sound. The first few bass players that we jammed with could not have gelled less with our concept, but thankfully we stumbled upon Hans Stahl, who had moved to the SF Bay Area from the Sacramento area. He posted an ad at a local music supply store; within one jam we knew that we'd found someone who had his own ideas about his music and his approach within it.  I suspect that Hans had some reservations at first, but he kept coming back as we scheduled practices and worked out tunes.
Within a year we had written several tunes, and were starting to play out. I have to give credit to Justin for that. He worked really hard to promote the band, get us on good bills, and generally push the group forward. With hindsight, we probably could have done a lot more. Bands from Berkeley, Oakland, and S.F. were tapping into the well-established touring/recording circuits built up by the two or three generations' musicians that had preceded us. I guess we held our suburban-ness as a kind of badge of honor, and never really got the concept of networking. This willful backwardness left us to fend for ourselves in most matters, and Justin, at that point, shouldered the load. I wish I could apologize to him now, for my selfishness as regards those dynamics within the process.
All that said, Lithium Milkshake did play on some pretty exciting bills: 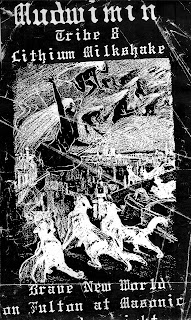 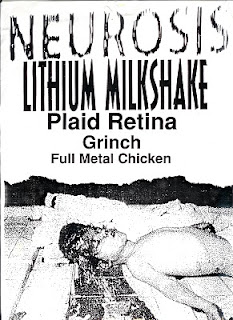 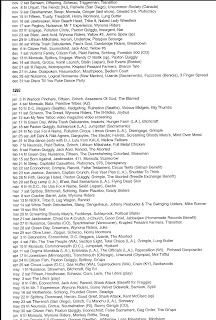 Above: Lithium Milkshake choice gigs. Plaid Retina and Mudwimin were particularly amazing.
Above: Our place in Punk History-2/7/92 at Gilman St., w/ Neurosis.
Below: Not quite a tour itinerary, but, hey, it beats hanging around in Fremont.

My first stint in Lithium Milkshake ended in 1993. I was replaced by Tony Fag, an amazing drummer who could play a lot more simply than me. I think that the management team which had taken over the band at that point realized that someone with a bit more talent for the simple approach was needed, as the goal had become "get signed or bust". I was less enthusiastic about the idea, and also realized that I wouldn't have a chance in those waters. It was an easy decision to just move on, but it stalled my music making for many years to come, at least in terms of Rock band drumming.
Below: great flyer art by Hans Stahl. What a unique and talented guy. 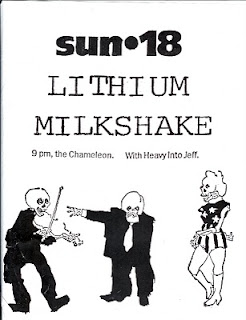