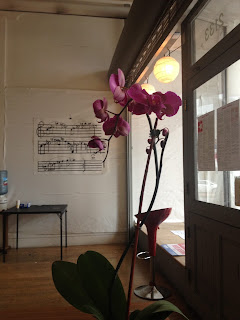 Every time that Mika Pontecorvo has one of his benefit show weekends at Berkeley Arts Festival, I marvel at how much cool music there is to be heard in the SF Bay Area. It's so fun to able to hear so much local talent, both established and emerging!
Also cool is the fact that I got to play a lot over the weekend. Here are some impressions...

Ear Spray-1/9/16
We played a somewhat quiet set, and, sadly, managed to clear the room pretty quickly. I guess that people don't really "get" our sound, but, hey, one can't really let that sort of thing get in the way of one's muse, right? Carlos suggested that we had some "surprisingly restrained and beautiful" sounds; his bass and harmonica contributions were quite new for Ear Spray! I had fun playing a stripped down kit of shakers, djembe, and cymbal, along with a new "theremin in a box" tiny pedal. Ann focused on her Cardew Choir influenced vocals and projecttions of Don Van Vliet paintings which were on large on the walls of the space. 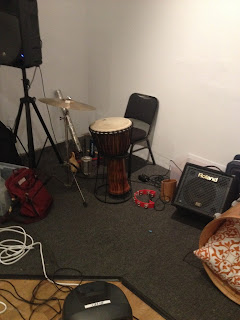 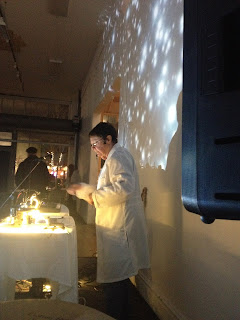 Above: Ann sets up

Bridge of Crows-1/10/16
After a few hours rest over night, I was promptly back at Berkeley Arts Festival space for day two on Sunday. I got to catch some more great music before Bridge of Crows' set! Donald Robinson, crikey, what a drummer! Dang. Bridge of Crows played two pieces, one shamanic drone-er during which I enjoyed playing some waterphone and Free Jazz moves on the kit, and then our Saharan-Siberian mixture of the Beefheart tune Ant Man Bee during which I played a lot more rhythmically steady. I'd say that it felt pretty cosmic to me, due especially to Mika's chanting, Eli's heavy bass lines, and Kersti's North African reed instrument. A nicely spaced out set!

Below: Cartoon Justice in black and white (photo courtesy of Amanda Chaudhary, www.catsynth.com, thanks, Amanda!) 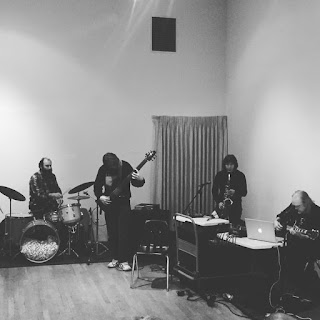 ebolabuddha-1/10/16
Well, not exactly ebolabuddha! On account of a booking mix up, and Steve being away in Japan, ebolabuddha recruited our pal Scarp Home to sit in on looped guitar. Our concept entailed using mostly Captain Beefheart lyrics, printed out and left in front of the group, as a way to entice audience members to join us. Thankfully, many did! We played as softly as possible for the most part, or to paraphrase Scarp, "...as if we weren't there at all...." It was fun and hilarious to interact with the people that did read along to our quiet sounds. They really helped us along. I got all clickey-clacky on the trap set, and spent a few minutes out front, egging the audience on. Showbiz!

Below: ebolabuddha done in iPad art! (courtesy of Russell Ward, http://ausrussell.tumblr.com/, thanks, Russell!) 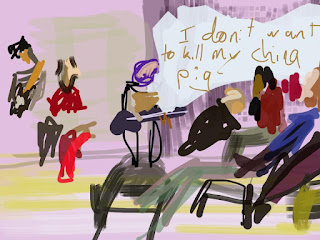 Ruminations-1/10/16
Compared to ebolabuddha's set, Ruminations' set was pretty furious. This iteration of the the band featured eight members, including Heikki Koskinen, Matt Davignon, Christina Stanley, Jacob Pek, Rent Romus, Brandon Evans (in from New York City!), and Peter Whitehead. We played one 25 minute improvisation, and it felt incredibly fiery to me. Seriously off the chain at times. Christina sounded especially aggro, which was amazing. She could not be stopped! It was tough to hold back behind all that, as I was sitting right next to her. That, and all of the electronic sounds, were seriously inspiring. Fun, fun, set of Out Music! 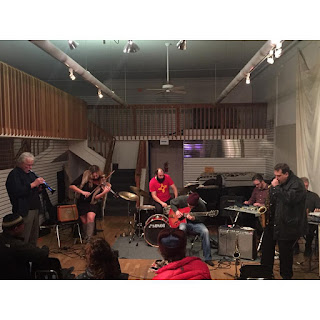 Instagon #699-1/10/16
Finally, to end night two of Hardly Strictly Personal 2016, Instagon brought its Free Funk fun to Berkeley. I was really stoked that Lob asked me to play with him; when I played drums for Instagon at the Make Out Room last year, I had one of those "rough nights", so, in some way, it was a kind of redemptive opportunity. It's challenging to keep up with Lob's shifting bass patterns, but definitely worth the effort. I tried do lay down somewhat simple, yet interactive patterns for Kevin Ian Common, Jaroba, and Lob to play to. I basically tried to play like Bill Bruford! The set felt pretty tight to me, and Kevin got some really fine, abstract guitar tones from his axe; it also strikes me as strange that he was wearing a quite visible Alladin Sane pin on his guitar strap, now). Jaroba's bair sax was nice and low, too. Awesome stuff to play along to. Instagon keeps you on your toes.

Below: Instagon #699 (photo courtesy of Amanda Chaudhary, www.catsynth.com, thanks, Amanda!) 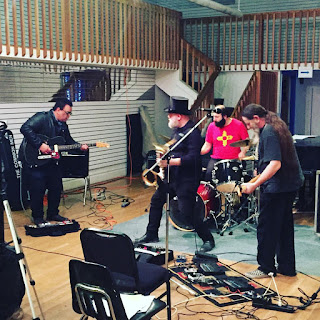 All told, it was a really satisfying musical weekend! Many thanks to all that attended, and to those musicians that played with me. I am extremely grateful to all of you. 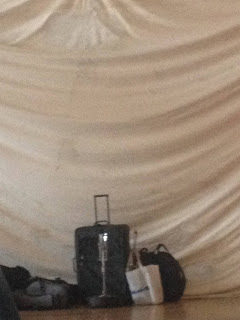 This Friday, the show continues!
Posted by Mark Pino On Drums at 5:33 PM