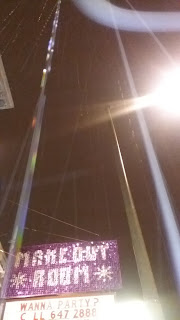 This gig was sandwiched between two harrowing trips across the Bay Bridge under some seriously intimidating rain, especially during the ride home, where I was exhausted and practically blinded by sheets of water splashing onto my windshield. That said, it was totally worth the white knuckles for the playing. Instagon #745 seemed to be a real cooker. The evening's iteration of Lob's continuously changing experiment in instrumental music/Chaos Theory fusion featured Karl Evangelista on guitar, Jaroba on woodwinds, Lob on bass, and me on drums. We kicked Instagon tunes like Eris and Jazz for Satan around pretty furiously. I can say that I'm starting to get a feel for Instagon's tunes; they're becoming more nuanced for me, which, I hope, is reflected in my playing of them. It being all improvised, there were a few gaffs and space-outs here and there, but I was able to brush them aside pretty quickly and keep things moving. Karl's playing was seriously thick and rich and killin'; it's my hope that Jaroba's matched his fury, but, as he was standing right in front of me (and between two amps), I barely heard him. It looked like he was rockin', though! Lob seemed to be enjoying himself. It's fun to lock in with his repeated bass pattern song kick offs, as it is to go down those surprising sonic alleys with him. A very enjoyable, high energy set!
Also fun was the hang, during which I got to talk briefly with Poet/Drummer Clark Coolidge about cymbal dynamics and Spencer Dryden's ignominious last days in Petaluma (SO.DAMN.SAD.), and hear David Mihaly's quiet insights into drumming. Some serious learning events for me.
Coolidge and Mihalys' groups, Ouroboros and Roots & Space respectively, were killer, to boot.
Hopefully Instagon #745 will appear somewhere on-line for listening.
Big ups to Lob, it's always a gas.

Below: Ludwigs; Lob checks his line 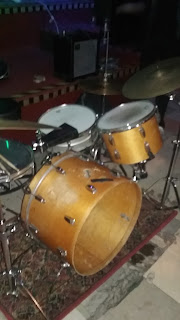 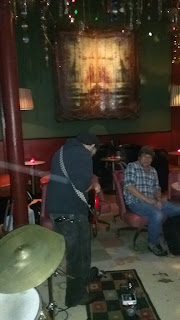 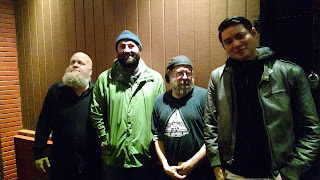 Above: Instagon #745 mugs in front of the Make-Out Room
Below: Ouroboros gliding 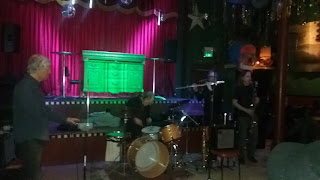 Audio from the set: