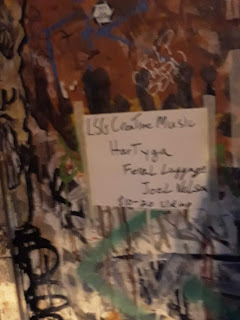 Feral Luggage-The Luggage Store, SF; 9/26/19
This show was supposed to have us as the second of two acts, but Mika Pontecorvo wanted to hook Hartyga up with a show in SF. Accordingly, we shortened our set to allow time for our Tuvan pals to play. This was a cool thing to do, and I was totally into into it. That said, our set was frustratingly brief for it. We really only got about 15 minutes of real interactive playing time in. Still, it was really nice to have some two drum set interaction going on with Patrick Telesfore, Jr. Man, that guy can play. As is usual with the Luggage Store, it was a bit tough to hear the entire mix of the band. Being situated near Kersti, I felt as though my best dialogues were with her alto saxophone. It was nice to have a small, enthusiastic audience for our sounds, and, as always, playing the Luggage Store is a great experience, save for the parking hassles, which are getting worse as the neighborhood around 6th St. and Market changes.

Below: my Jungle Jazz Feral Luggage kit! Love it! 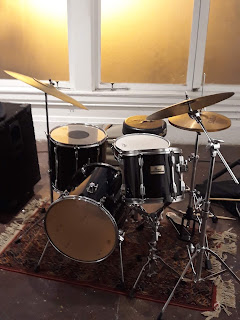 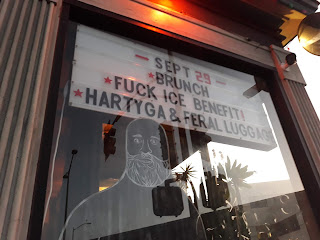 Feral Luggage-Starline Social Club, Oakland; 9/29/19
Thankfully, at the Starline Social Club, there were only two acts, us and Hartyga. I'll start by stating that the performance space at Starline is sweet! Really intimate, but well decorated and cool. A neat place. Feral Luggage jumped into our scheduled set and laid down what felt to me to be some pretty groovy Null Wave, as Mika has dubbed our sound, for a good 40 minutes of spaced out sounds. I was feeling pretty introspective in the hours before we played, and think that this may have colored my hearing of our sounds. Even better "chatter" with Telesfore, really connected feels with Eli and Kersti as well. Things just seemed to flow as we played. We even  managed to hook some people in and keep their attention for the duration. Very nice. This set was recorded in stereo, and it's my hope that it ends up on Soundcloud at minimum.
Below: a lot of gear on a small stage 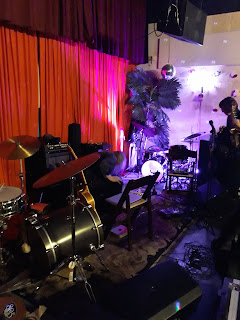 Hopefully Feral Luggage plays some gigs again soon, as it's quite good in my estimation. Many thanks to Mika and Hartyga for hooking these cool shows up.