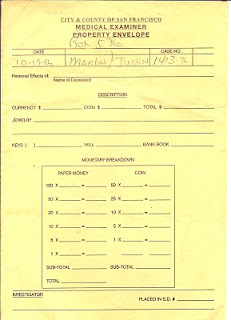 Lithium Milkshake was formed in 1990 in Fremont, California.  Justin Martin played guitar and sang, Hans Stahl played bass, and I played drums.  I will post video with this lineup, along with a bit more descriptive writing.
The songs featured here were recording in mid-1996, at Lennon Studios on Dore Alley in San Francisco. This lineup of the group featured Jeff Alves on bass, as Hans had decided not to be involved in what was essentially a reunion try.  The group as configured played two shows, at The Edge in Palo Alto and at the corner of 6th St. and Taylor in San Francisco.
As mentioned in a previous post, Justin died on 10/19/96 in San Francisco.  Jeff has resumed his painterly ambitions.  I've seen his paintings posted on the web, and they are great. I'm not sure where Hans is.
I wish these tunes could have been recorded at a proper studio.  I love the simplicity of them. Justin wanted a stripped and slowed down set of tunes to work with. He seemed to be going for maximum emotional impact, by way of sheer simplicity in presentation.
As we worked on the tunes, he got sober, then fell off of the wagon. The last time I saw him, upstairs at the Paradise Lounge, he told me "I'll be alright" as he headed downstairs an onto the street.  I thought he was heading back to his home base of Antioch, but I guess he and Jeff had other plans for the evening. Justin died later that night, inside of our lock-out rehearsal room at Lennon Studios.
I still miss Justin a lot. I wish he could have worked out his problems and lived longer. 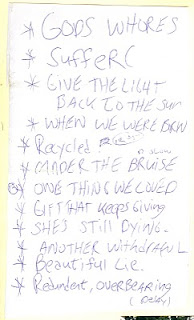