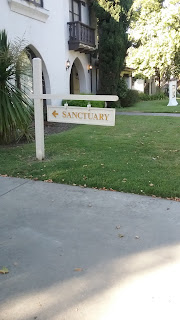 June was kind of a bust for me as far as playing live went. Two gigs, both cancelled for various reasons. In light of that, when I got a call from my sister, saying that a friend of hers needed a sub drummer for her choir's service on 7/2, I jumped at the chance to get out and play.
I wasn't sure how things would go when I showed up at the Center For Spiritual Enlightenment in San Jose; after a quick rehearsal rundown of the order of their Sunday prayer service and its songs, the choir and band had a brief moment or two of down time before things got under way.
Thankfully, for the most part I was able to keep the arrangements of the four songs that were played within the larger service straight in my mind. Within this context, I felt as though the most important factor was dynamic, sensitive playing. I didn't want to be the person overpowering the singers with over-loud drumming. At times it was challenging  to mesh that aspect with a confident feel evinced from really knowing the tunes, but with some guidance from choir leader Paula Chacon, I was able to navigate those times.
On an emotional level, it was quite cool to be playing spiritually positive music within the context of a big group of singers and some great piano and bass playing within the band.  It felt really nice to be making music within the lovely interior of Center For Spiritual Enlightenment's sanctuary as well. At one point, the group was playing, the choir was singing, and the congregation was all clapping along to our music. To be a drummer within that type of action....blissful. REAL nice.
Along with all of the music, it was great to hear CSE's minister give a really good talk on the subject of "Who's Love". Much food for thought to be had from his words.
A fine way to spend a Sunday morning!
Thanks to Paula for offering me the sub job.

Below: Paula C. leads the choir in rehearsal; beat up, lovely drum kit with a killer bass drum 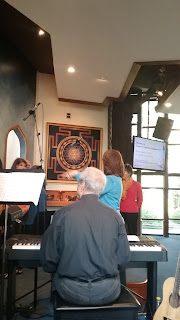 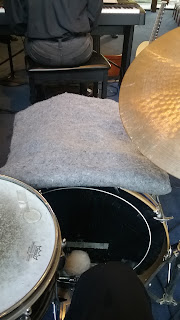 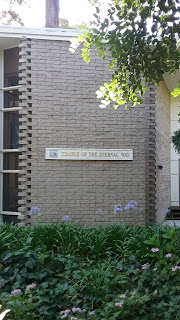 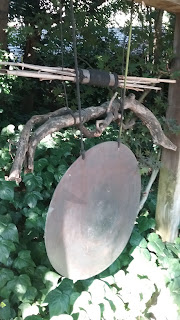 Above: some views of the lovely grounds of Center For Spiritual Enlightenment
Below: the building adapts to the tree! 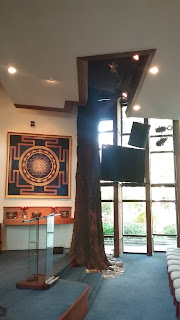 More live gigs are coming up in July...